The limb I never lost 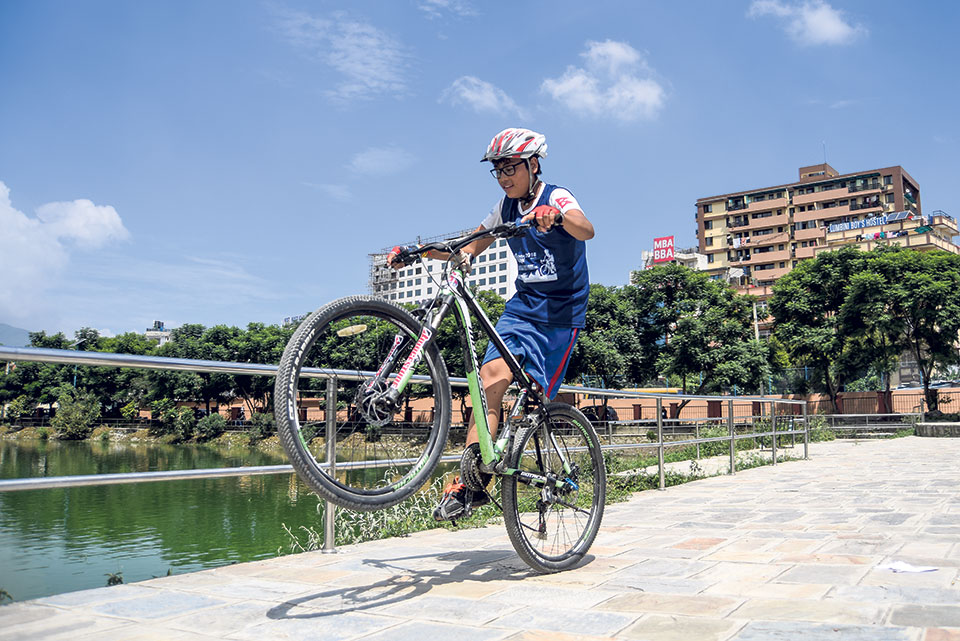 At a glance Yubak Lama may seem like an ordinary boy but his life and experiences are anything but ordinary.

18-year-old Yubak Lama who hails from Dhading is an aspiring cyclist. He’s been cycling actively on the off roads of the valley for half a decade with a seasoned swiftness that only ever comes with years of practice. What’s so special about that, you might wonder. And indeed, in the recent times, many youngsters have taken to cycling. But Lama, who is currently enrolled in Geeta Mata High School in Dallu, Kathmandu, only has one leg and the way he maneuvers his ride is extraordinary. What’s more, he recently secured first position in cycling in Nepal’s first Paralympics. 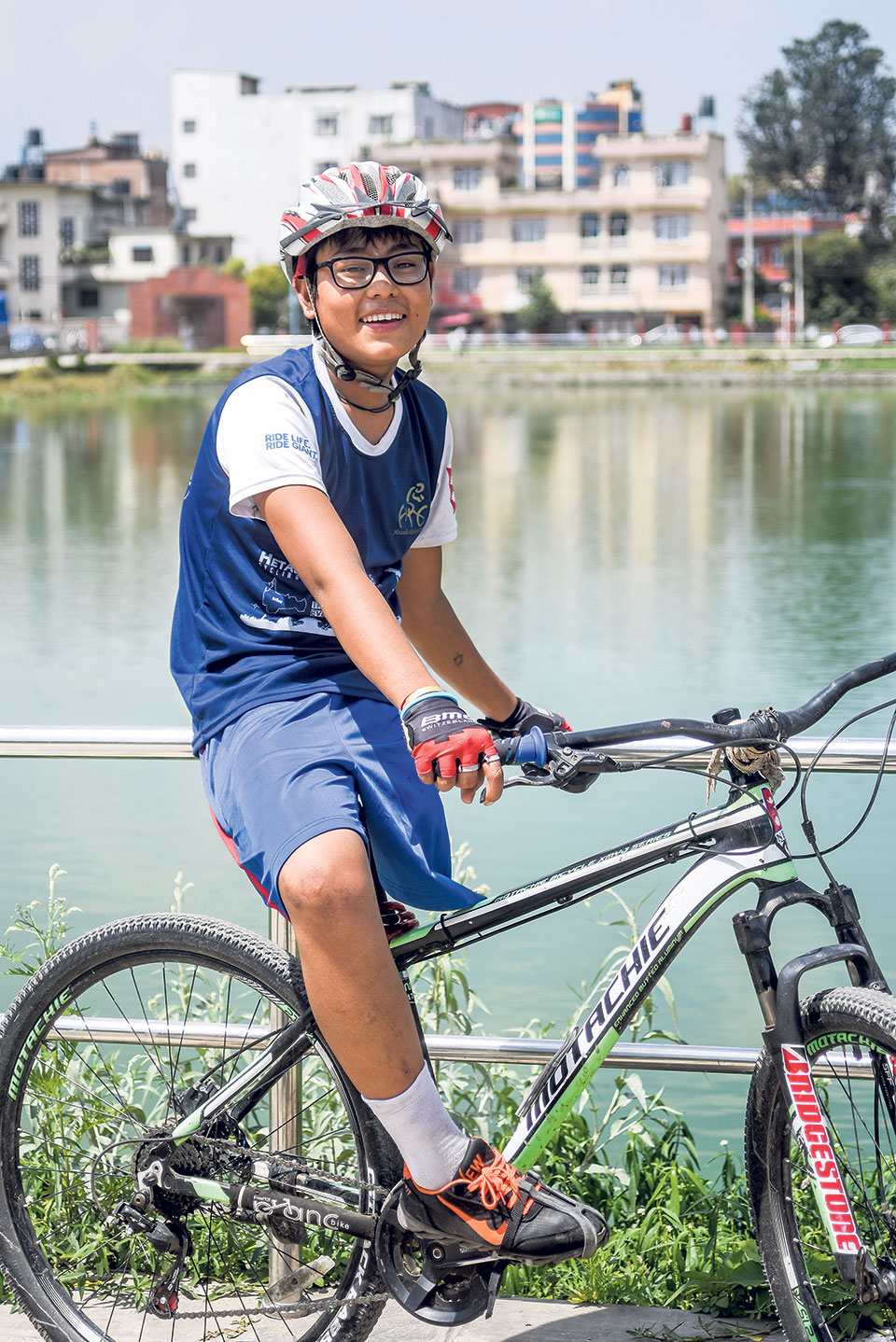 Nearly six years ago, Lama had an accident on his way home to Dhading from Kathmandu. A bus overturned and Lama came under it. One of his legs had to be amputated. For Lama, it wasn’t losing a limb but also the knowledge that he would never be ‘complete’ again that was the hardest to bear. The initial days were especially tough. “I couldn’t accept the reality that I would only have one leg from then on. And the thought that I might have to depend on others for basic things was really hard to come to terms with,” he says adding that at that point he never thought he would ever come to accept it much rather make peace with it.

But the moment Lama came out of the hospital he vowed to live an independent life as far as he could. Cycling was a step in this very promise he made to himself. He started cycling because he was frustrated with the unreliability of public vehicles in the valley. Also, boarding public vehicles was a great hassle. Every time he had to commute there would be more problems than he felt he was ready to deal with.

“It was highly demoralizing. I couldn’t reach places I had to or I never reached there on time. Though there are seats reserved for the differently-abled, the rules aren’t really followed and it makes traveling in public vehicles a harrowing experience. Complaining and wallowing at my inability felt pointless. I had to look for alternatives because I wished to be self reliant,” he says adding that that was the reason why he decided to take up cycling despite only having one leg. 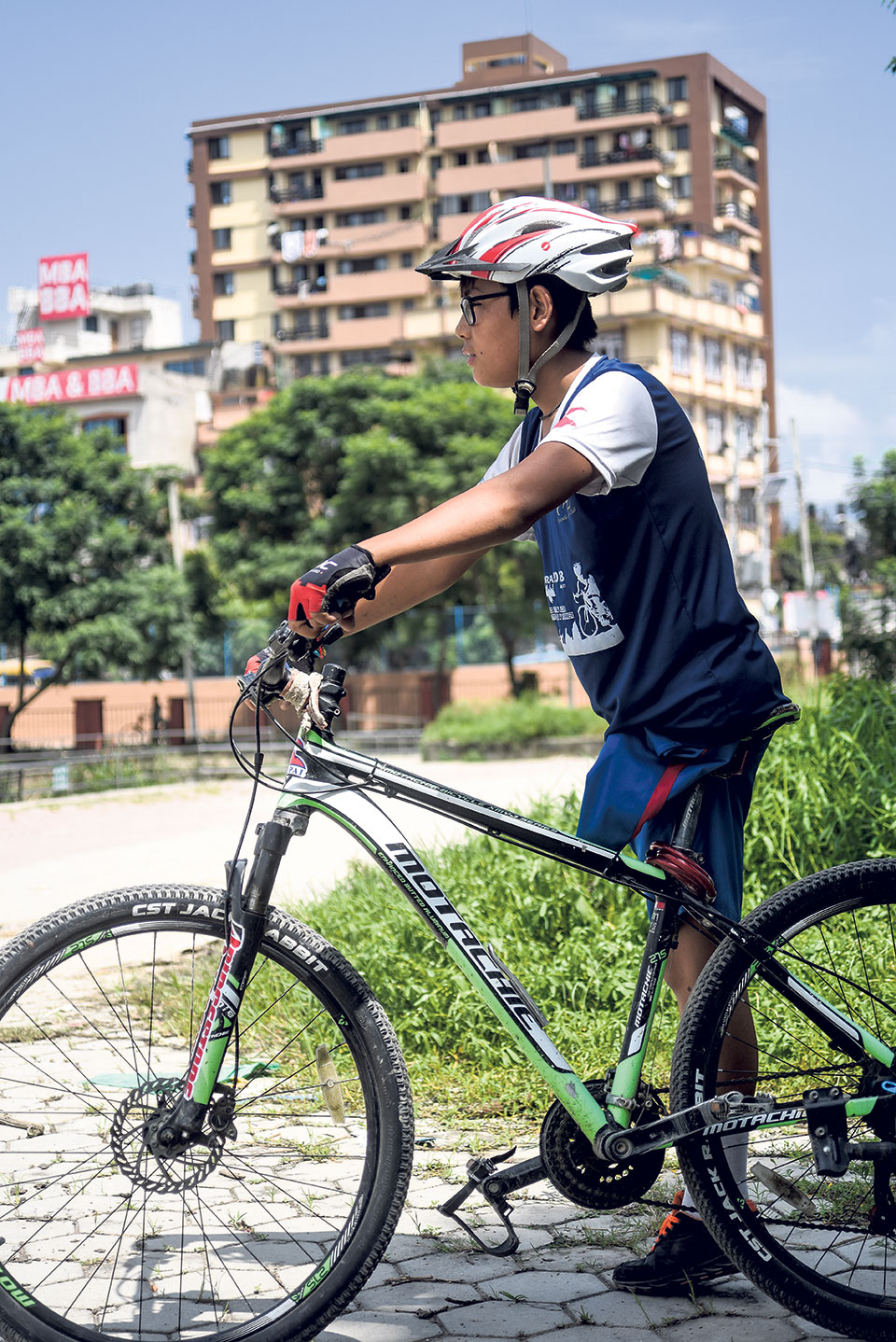 But the process of actually riding a bicycle with one leg wasn’t simple. Turning the pedals with just one foot was impossibly difficult. But everyone around him was of great help when he was learning. “I would have a hard time balancing the cycle but there was always someone or the other who would hold it for me. People treated me with infinite patience and for this I’m ever so grateful,” he says.

Years down the line, Lama now stands at par with most professionals in the valley and says cycling is his life’s aim. Through endless trials and triumphs, he has finally devised for himself a uniquely singular technique through which he stays balanced on his cycle. He lodges the main paddle between the sole of his foot and his shoe, which is affixed with the shoe’s lace.

Today, he cycles every single day. He goes to college every morning and then heads for his guitar lessons. Every weekend he goes on expeditions with Kamala Group, a band of cycling enthusiasts who cycle on elaborate tracks, beyond the trails of Kathmandu. “The group is very supportive. My seniors are passionate cyclists and it does me very good to be around them. Absorbing their energy refills me. They don’t slow down for my sake but they challenge me to give cycling my all instead and that’s exactly what I do,” explains Lama.

However, he confesses that his family was deeply concerned and perhaps a little disturbed too when he first expressed his desire to take up cycling as a profession. It wasn’t just the uncertainty of the unconventional career choice that had them worried but also issues of his safety. However, with professional cyclists backing him and allaying the fears of his close ones, he now has his entire family rooting for his success.

But it’s not like difficulties and challenges are things of the past for Lama. To become a professional cyclist and to excel at it, you require special training, and special training requires special financing. Lama isn’t able to afford the safety equipments and dietary supplements that he needs for practice and physical preparation. The Heartbeat organization is funding his education but he is also on the lookout for any beneficiaries who may consider aiding him in his special training.

“My cycle is my other leg. It gives me the ability to stand on my own as if it were a part of me. I don’t need to depend on anyone. I can take myself wherever I want to go. To me it has replaced the limb I lost,” says Lama adding that he is willing to do whatever it takes to show the world that a ‘disability’ needn’t rob you of your life and that you can still do anything you want if you put your best foot forward.

POKHARA, Nov 19: Can one reach Tilicho Lake, one of the world’s highest-altitude lakes, on a bicycle? Many may not... Read More...