The Latest: Syrian monitors say 14 killed in air base strike 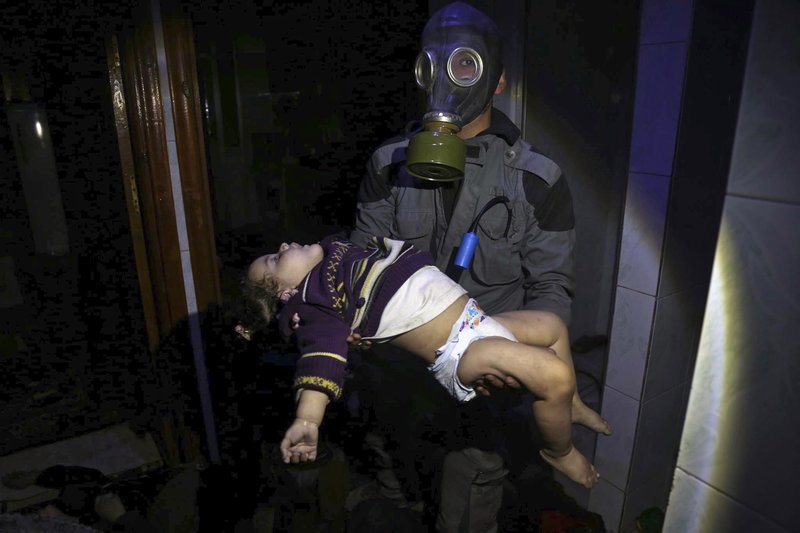 EDS NOTE: GRAPHIC CONTENT - This image released early Sunday, April 8, 2018 by the Syrian Civil Defense White Helmets, shows a rescue worker carrying a child following an alleged chemical weapons attack in the rebel-held town of Douma, near Damascus, Syria. Syrian rescuers and medics say a poison gas attack on Douma has killed at least 40 people. The Syrian government denied the allegations, which could not be independently verified. The alleged attack in the town of Douma occurred Saturday night amid a resumed offensive by Syrian government forces after the collapse of a truce. (Syrian Civil Defense White Helmets via AP)

BEIRUT, April 9: The Latest on the situation on Syria (all times local):

A Syrian war-monitoring group says 14 people, including Iranians, were killed in a missile attack early in the morning on an air base in central Syria.

Rami Abdurrahman, who heads the Britain-based Syrian Observatory for Human Rights, says most of the 14 killed were either Iranians or members of Iran-backed groups.

Syria’s state-run news agency earlier reported that missiles struck the T4 air base early on Monday. It said the attack left people dead and wounded. Although the agency said it was likely “an American aggression,” U.S. officials said the United States had not launched any airstrikes on Syria.

Al-Manar TV station of Lebanon’s Iran-backed Hezbollah group, which is fighting in Syria alongside the government forces, described the attack as an “Israeli aggression.”

The Observatory says it wasn’t immediately clear who was behind the attack.

Syria’s state news agency says missiles have struck an air base in central Syria in the early hours of the day.

The agency said it was likely “an American aggression” but U.S. officials say the United States had not launched airstrikes on Syria.

Monday’s missile attack followed a suspected poison gas attack on Saturday on the last remaining foothold for the Syrian opposition in the eastern suburbs of Damascus. At least 40 people were killed, including families found in their homes and shelters, according to opposition activists and local rescuers.

SANA reported that the missile attack on the T4 military air base in Homs province resulted in a number of casualties.

The U.N. Security Council planned to hold an emergency meeting Monday to discuss the chemical attack.

CHAUTARA, April 2: A person was killed and another injured in a lightning strike in Sindhupalchowk during the storm on... Read More...