The last-minute rush: Development or deception? 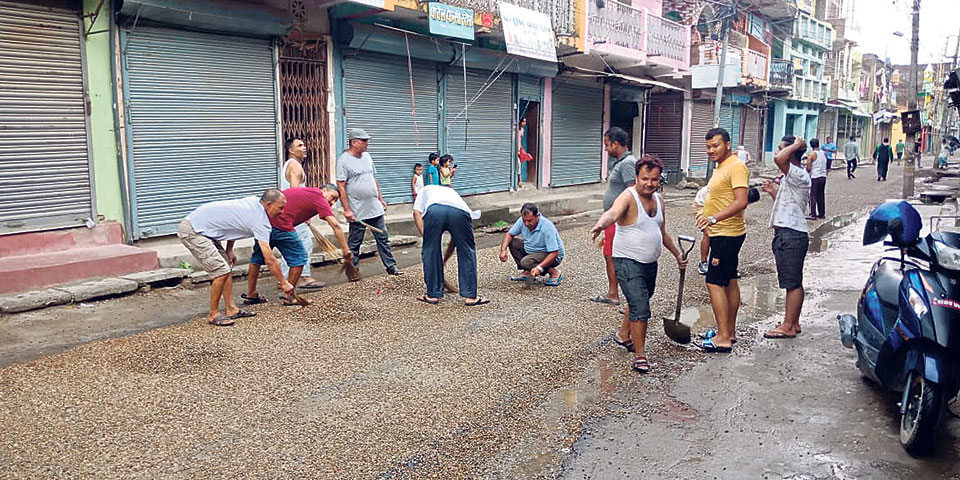 Work underway on the upgrading of a road in Ghorahi Sub-metropolitan City in this recent picture. Photo: Devendra Basnet/Republica

DANG, July 1: Ghorahi Sub-metropolitan City is extremely busy in implementing development projects these days. It has been working on repairing and widening roads, constructing new infrastructures, among others round the clock. However, in doing so, the office has wholly neglected quality standards. The rush to complete the projects before the end of the fiscal year is apparent.

Asare Bikas, a term used to denote implementation of development projects at the last minute to avoid budget freeze, is not a new practice for the country. Even though the practice has been widely criticized and discouraged by the federal government, local governments are still embracing it.

Just like many other local bodies, Ghorahi Sub Metropolis had itself vowed to discontinue such practices and would go for rigorous development practices. However, it could not keep its promise. Roads around Ghorahi market roads, which are filled with sand and gravels amid regular rains washing those away, are the testimony to the senseless investment being made by the local body.

The roads are not only causing inconvenience to vehicles and commuters, but it is also posing as a security risk. There have been some accidents on the roads in the past few days.

“Four to five accidents take place along the Ghorahi road daily. Most of these accidents are happening due to construction materials piled up on the road,” said Ramesh Kumar Pandey, chairperson of Ghorahi Sub Metropolis – 15. “I don’t understand why is the metropolitan office being so irresponsible. Is it trying to reduce the population of Ghorahi?” he added sarcastically.

“The sub-metro office did not consult or inform us regarding the widening and upgrading of roads that are in our ward,” Pandey said.  As per existing provisions, it is mandatory for the sub-metro office to seek permission from its ward offices before approving or implementing development projects in those wards, he said. However, according to Pandey, he was kept in the dark about the works being carried out in his own ward. “I was not informed about the plans to widen and upgrade the roads. And they are working so recklessly that the residents are venting their ire on me. What am I to answer them?”

The sub-metropolis, however, defended its action claiming that the roads were being upgraded in collaboration with the Department of Roads. “It was important to upgrade the roads, so we consulted the Department of Roads in this regard. Gravel roads and black-topped roads that needed fresh black-topping are being upgraded,” said Ramdhan Shrestha, an engineer with the sub-metropolis.

He stated that over seven million rupees have been spent for buying construction materials for the road. “In total, we are upgrading six kilometers of road and, around fifty percent of estimated work has been completed,” Pandey informed.

Going back the memory lane, the sub-metro had the same last year also. Last year also it had spread gravel haphazardly on the roads just like this year.  At the time it had defended the action claiming that it was a part of the development process.

“Every year, they do this. What sort of development is this?” wonders Ramesh KC, a local of Ghorahi. “They are upgrading good roads, bad roads, any road without discrimination. They are not bothered where the actual upgrading is needed and where not.”

In KC’s eyes, what the sub-metropolis is doing is total nonsense and waste of taxpayer’s money. Had there been zeal to work for development, there would be proper planning and guidelines, he argues. “Every time they touch things unnecessarily and leave the roads even more prone to accident. Their real objective is not to upgrade the roads, but to spend the budget. It’s not development but deception,” he accused.

In the last few days, KC’s motorbike has met with accident twice along the Ghorahi road. As construction materials cover the road, it is very challenging to drive on it.

Locals have been protesting the upgrades claiming it to be a ‘drama.’ Stating that Asare Bikash is nothing but a drama, they have warned the sub-metropolis to stop following the footsteps of other local levels. “We understand that Asare Bikas is happening everywhere, but we have come together to voice against it,” said KC.

Last week residents staged protests against the move, and some of them even threw away the aggregates from the road. People from all walks of life had gathered in Ghorahi market to protest against the haphazard development and to ‘correct the government’.

“We want the government to correct the way it is working.  If we stand united against such kinds of development, they will get discouraged. They will have to think twice in the future to do so,” said Tara Adhikari, another local of Ghorahi.

Biratnagar roads in need of repairing

BIRATNAGAR, Aug 20: Like in most part of the country, Biratnagar locals are having hard time due to poor condition... Read More...