The itch to ink in the eyes of the artist

Tattoo making has always been a part of Nepali traditions. Back in the days, it was a cultural norm among the Rais and Limbus of the country. Now, it has assumed form like it has done in most countries – it is how millions immortalize memories, maintain faith and derive strength in difficult times. Tattoo artists, as such, take great pleasure from their work and so does Sumina Shrestha.

Sumina has been drawing and painting for a long time now. For as long as memory serves her, she has drawn. It was so that, very early on in her life, she decided to make a living as an artist. Everything else felt bland to her. It was only drawing and creating art that felt real and her parents supported her decision wholeheartedly.

She has now worked as a tattoo artist for over three years and permanently books sessions in Wander Thirst Hostel. Originally from Hetauda, she has also traveled to India to learn more about tattoo making where she understood the art form from various perspectives. Previously, she worked at the Tattoo Pasal in Jyatha, Thamel for a few years.

When wanting to be an artist, right after her high school, she was fascinated by thangka painting and tattoo making and couldn’t decide between the two. But she had to settle on one as both required years of practice and dividing time between the two would only keep her from mastering any. In the end, she decided on tattoos. “Thangka painting is very intricate and you will find yourself slaving over on a single work for days and weeks,” says Sumina. But tattoo making, she says, felt fresh and more challenging to her. “Every design you do is different from the other. You need a different approach to each work as no two designs are alike or even skin types for that matter,” she adds.

In the earlier days, getting tattoos was held as something the elite, the adventurous would do. So any kind of tattoo, even sloppy or casually done, was accepted. This is not the case these days and Sumina expresses her pleasure in this change of perception. These days, people attach greater meanings to their tattoos and put in more thought to what they want. Sumina notes that her clients often come with designs of their own making and are certain of what they want in their tattoos.

“The whole creative process is stimulating,” claims Sumina. She explains that she tends to modify certain aspects of the designs her clients bring to her. “Personally I think of it as a challenge too. Emulating designs is simple but I have a mindset where I try to reinterpret patterns and not conform to one that is readily drawn out,” she says. Convincing her clients to reimagine their ideas is a feat, Sumina admits, that serves another challenge.

She recounts one instance when a lady wished to get a simple lotus flower for a tattoo but Sumina made some alterations in the design and proposed the idea. Her client was not only enthused but also exclaimed how Sumina had drawn the very design she wished for but could not communicate the details of. “Too often people want more than just simple outlines but have troubles conveying their wishes. I believe it is the job of the tattoo artist to listen to them and try to figure out what they really want,” she says.

For Sumina, the sessions she spends drawing tattoos on people is how she learns of human experiences and finds friendships too. People get couple tattoos, life-aim tattoos, traditional tattoos of Gods and Goddesses and more. Everyone has his/her own reasons for getting inked and learning of them through the sessions is where the real fun lies.

A tattoo, depending on its size, may take anywhere from 15 minutes to days of bulk-hour sessions. But it is the machine setup that consumes time, especially since there are health and sanitation guidelines to abide by.

Each tattoo, as Sumina explains, is different. These days there are a lot of people wishing to redo their tattoos too. In lieu of fashion, they ended up with tattoos they now shun, so they come to tattoo parlors hoping to alter them. Cases such as these are warmly welcomed by most tattoo artists, Sumina included. “What we do in such times is literally making diamonds out of coal,” she claims.

For Sumina, making tattoos is more than just a means of making a living. It is how she experiences life. This is one such field where she doesn’t feel restricted, not artistically or even by societal norms. And being a part in this wave of change, where tattoos are more than just a passing trend, but rather an expression of faith, hope and love, Sumina feels whole. 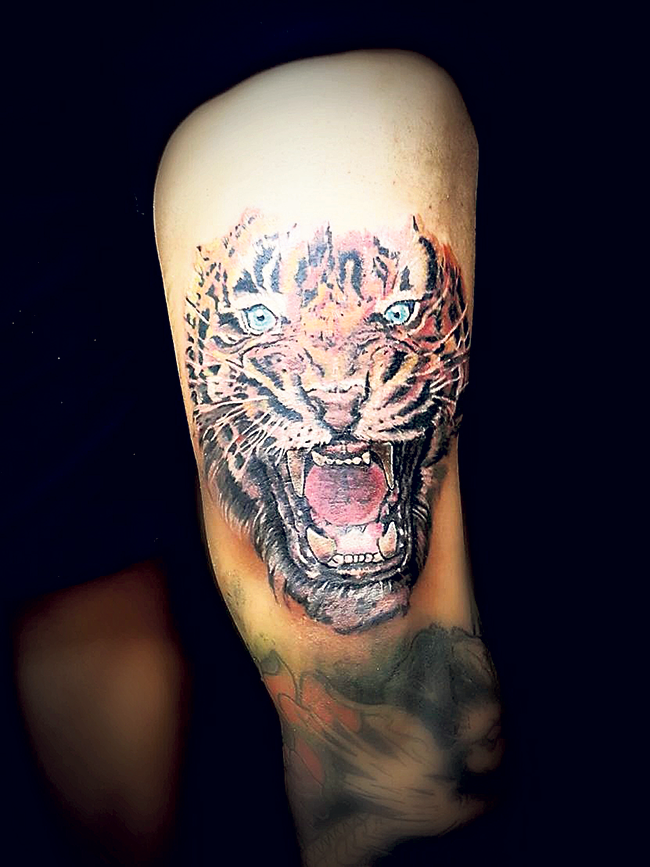 American actor Dove Cameron discussed in-depth the tattoos she has on her body. She also divulged the reason behind getting... Read More...

Looking to get inked? This tattoo making robot can help

LONDON: Aug 9: A duo of French artists has developed a robotic arm that can autonomously create intricate tattoos on... Read More...

We urge India to accept the truth: FM Gyawali
20 hours ago

Upper Tamakoshi Project likely to be delayed
10 hours ago

VIDEO: PM Oli addresses to the nation
1 hour ago

With 72 new cases, Nepal’s COVID-19 tally spikes to 675
5 hours ago
Nepali Congress stands for suspension of funds to parliamentarians
7 hours ago
Patient dies at COVID-19 ward of Bharatpur Hospital, swab samples collected for test
7 hours ago