The intimacy of a relationship 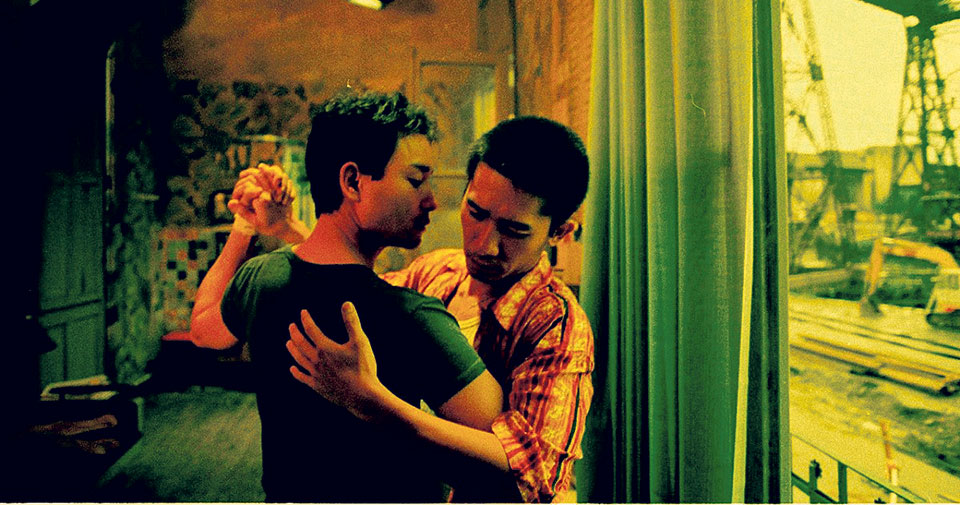 Wong Kar-wai is a magician, a mystic when it comes to merging colors, emotions and music. His 2000 film In the Mood for Love is on my list of favorite films. Watching the film was one of the best moments (one hour 38 minutes) of my life. After watching In the Mood for Love, it was only natural I would gravitate towards Kar-wai’s other creations to see what tragic but poetic love story he had in store for me. And I have to say Happy Together did not disappoint.

Released in 1997, Happy Together tells the story of a gay couple Ho Po-wing (played by Leolie Cheung) and Lai Yiu-fai (played by Tony Leung Chiu-wai) and the ups and downs in their relationship. At the beginning of the film, the couple is lost trying to visit the Iguazu waterfalls in Argentina. Most of the film takes place in Argentina, Buenos Aires and ends in Taipei. Its Chinese title is an idiomatic expression that means “the exposure of something intimate”.

Iguazu waterfalls acts as a leitmotif in the film, constantly recurring as the ultimate illusion of stability and love in their relationship which they both wish for but never achieve. The relationship between Po-wing and Yiu-fai is passionate but ultimately toxic. It’s hinted that they break-up and patch up constantly, and they break up twice and patch up once during the duration of the film.

If anyone were to look at the duo’s relationship from afar, one would assume Po-wing to be the eccentric one, whereas Yiu-fai seems like Po-wing’s shadow, quiet and not so remarkable. But if one were to zoom in, between the two men, it’s evident that Yiu-fai is the more mature and stable one. Po-wing is erratic and temperamental and, often times, down right selfish. Every time they break up, Yiu-fai knows better than to let Po-wing into his life again but Po-wing swoons him and he is left falling for Po-wing’s invitations.

In one particular scene, Yiu-fai is bed ridden with fever, thanks to Po-wing’s decision to go for a morning walk in freezing weather. All this time, Yiu-fai has been working alone and taking care of Po-wing after he gets beat up. Po-wing comes near Yiu-fai, whose lips are as pale as snow and is trembling, and asks him to make something for him. Hearing this, Fai yells, “Are you human or not!” This shows that Yiu-fai is aware of the fact that he is putting in way more into this relationship than Po-wing but still he is willing to be hurt and be with Po-wing (he gets up and makes Po-wing food.)

However, this is not to say that Yiu-fai is not responsible for this relationship going sour. He hopes that Po-wing remains sick forever so that he doesn’t have to leave home and refuses to give Po-wing his passport back. The fact is that both Yiu-fai and Po-wing are not compatible with each other. Their physical contact is more out of violence that out of love and it’s annoying to watch them constantly bickering. Then, why do they still get back together? Both men have left their hometown and have come to Argentina and both can’t afford to go back. They are trapped there geographically and mentally and both long for familiarity even if it’s ultimately toxic.

In the second half of the film, we are introduced to Chang (played by Chang Chen) who works at the same restaurant as Yiu-fai. Chang, on the other hand, is the opposite of Po-wing. He is calm, considerate and poetic. He likes to hear people talk and makes Yiu-fai feel at ease. Yiu-fai and Chang’s friendship gradually deepens and Yiu-fai finds himself smiling and happy after a long time. We don’t know for sure if Chang is gay or not – he does reject a girl’s request to watch a film and says he likes voices that are “deep and low” but we all know better than to assume one’s sexual orientation, and that too based on such frivolous concepts.

Thanks to Chang, Fai finally learns to let Po-wing go. There’s one particular heart-wrenching scene where Chang asks Yiu-fai to record a message that he can take to the “end of the world”, the Southern tip of South America, where there is a lighthouse where supposedly all sorrows can be dropped. Yiu-fai sobs silently, letting go of all the bitterness from his past relationship. Yiu-fai also visits Iguazu alone without Po-wing or Chang, showing that the ultimate happiness we long for can’t be achieved by the love of others and that it’s important to love ourselves first.

Like all Kar-wai’s films, the eye-popping colors are brilliant. Each still looks like a painting hung at a museum. Frequent collaborator and cinematographer Chirstopher Boyle does a great job playing with colors to make it as erratic as Po-wing and Yiu-fai’s relationship. The musical score, ranging from Tango tunes to pop music, speaks volumes when the characters are silent.

The film portrays that rawness and vulnerability we show when we decide to love someone. After all is said and done, all of us long for someone who not only loves our laughter and our excitement but also the darker and insecure parts in ourselves that we ourselves are struggling to accept. And in this process, sometimes, we tend to get hurt. But it’s necessary to try and reopen that shell again and find someone more compatible and loving.