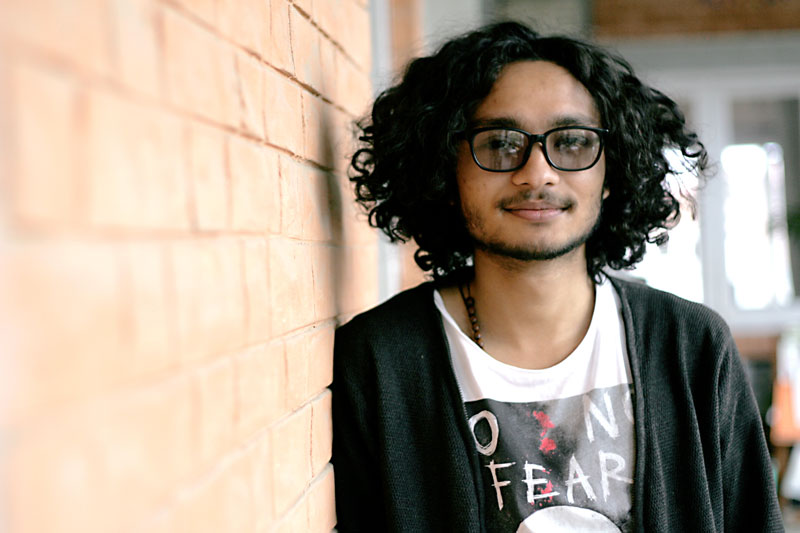 He began his musical career in 1997 when he sang “Jindagi ko k bharosa” in a music competition when he was in the first grade. Rohit John Chettri has since launched his own solo career and released an album with 1974AD and has been on a US tour. With his new album coming out in a few months, The Week’s Isha Upadhyay caught up with him to talk about his musical journey and, of course, his playlist.

Do you write your own songs? Where do you find the inspiration?
I do write some of the songs myself but I don’t write them all. My Nepali isn’t that great so the words don’t really come to me. The only time I find words to put into songs is when something big happens in my life and I feel deeply about it. Unless it does, I can’t seem to get into the flow. And, of course, major life events don’t happen often.

What is it like when you are in a band versus when you are going solo?
With a band, there are so many people suggesting what can be done with a song. Someone will think of an arrangement and the other will give constructive criticisms. It helps improve the original idea which makes it a team effort and that helps refine the songs. While working solo, since I don’t have a band, I collaborate with artists and try to incorporate my own style into the songs. I tell them the kind of music I want and there aren’t many people giving inputs to improve and polish the songs.

How would you describe your style?
Although I have more of a pop fusion style, some of my widely loved songs are pop. “Bistarai bistarai”, “Timra dui ma”, “Pani paryo” are all pop songs. But I have tried to add a little classical flavor to my music by fusing tabla beats into some songs. Some of my songs also have an element of funky music and some others have a bit of jazz. I’m working on a second album now which is a little experimental. I hope people receive it as well as they did my first album.

Is there any song of yours that you have immensely enjoyed singing?
Since they are all my own songs there isn’t any particular song that I enjoy singing. However, since most of my audience love “Bistarai bistarai” I enjoy singing it for them. It’s really great to see my work being appreciated and when the crowd begins to sing along and cheer, it’s a feeling like no other.

And although I cannot really predict the future, I hope that I will, at one point, release a track that the audience will come to love more than they love “Bistarai”.

Do you have any plans to go on tours?
Talks of a tour are on the books for April 2017. Although it is my solo concert, Ashesh Rai, Subash Siwa and I are teaming up and planning to go as a trio. They have applied for their visas and, if it gets processed, we will all go together and I’m really looking forward to it.

The reason I like Narayan Gopal so much is because of the songs composed by Gopal Yonzan. More than the one or the other, I like them as a duo. Narayan Gopal would sing the songs with the emotions that the lyrics demanded which did great justice to the lyrics.

A man of many talents, he is a composer, vocalist, and lyricist. His style and the depth of his voice really get to me. There is something on the way he improvises on all the songs which make me want to listen to him on repeat. I hope to one day watch him perform live.

He is a Pakistani classical singer who used to be the lead singer of a band called Fuzön. When he was with the band, I heard his songs and liked them immensely. He then collaborated with Shankhar Mahadevan for the song “Mitwa” which I really liked as well.

I find her voice very sweet and her songs very expressive. From the beginning of the song to the end, her songs have a depth of feelings that make it almost tangible. I couldn’t choose a favorite song if I tried, although I do enjoy Come away with me, Sunrise, and If I was a painter.

Sometimes I try making retro, EDM kind of music when I’m home and this electronic music duo have very recently made their way into my playlist. Although I don’t really do ‘dance music’, I have been experimenting a little and they have been very inspirational.

Listening to music may help you exercise longer and more regularly

Listening to music while exercising can help you work out for a longer time than those who do not have... Read More...

Music, food and much more at Pokhara Street Festival

POKHARA, Dec 28: Pokhara is vibrant with celebratory mood among its denizens as well as visitors to welcome the forthcoming New... Read More...

KATHMANDU, April 7: More than a thousand traffic rule violators in Kathmandu Valley are being subjected to legal action on... Read More...

63 lost statues brought back to Nepal
15 hours ago