The curious case of Anil Sah 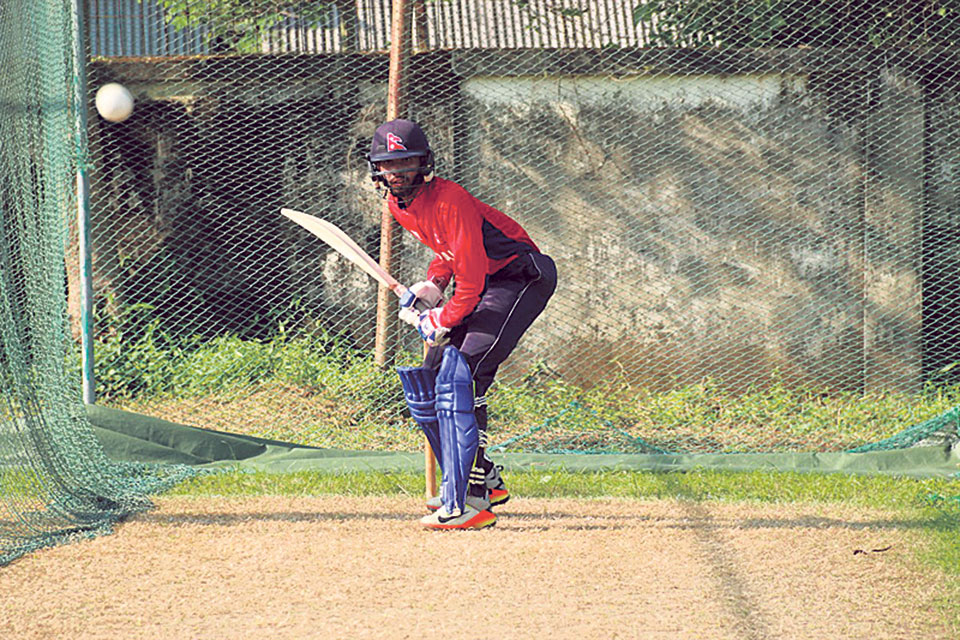 KATHMANDU, March 6: Anil Kumar Sah, the Kalaiya-born all-rounder, is one of the many modern prototypes who came to national limelight when no selection-level cricket was going on in Nepal.

The Cricket Association of Nepal (CAN) remains suspended by International Cricket Council (ICC) since April 2016. But as many as six players -- Dipendra Singh Airee, Dilip Nath, Lalit Bhandari, Anil Kumar Sah, Rohit Kumar Paudel and Lalit Rajbanshi -- in the current squad have made their debuts for Nepal since then. However, this list excludes Aarif Sheikh whose second coming has been more recognizable than his first outing for Nepal in 2015 that was forgettable, and the teenage sensation Sandeep Lamichhane who made his debut 10 days before CAN was suspended.

From all the players in the list, Anil Sah is still waiting to get a turn in the playing XI after making one-off appearance against Kenya. The lanky bloke with long reach gets an effective swing of the bat to get his aggressive shots away, in style that is unique among the handful of batsmen coming from Nepali towns. His pull shots are the most dominating from his repertoire. He is comfortable facing either the pace bowlers or spinners at the start of his innings. He gradually moved up from number six or seven in the batting position to number three for Nepal U-19 and opening position for the senior team.

With no CAN at place, Everest Premier League (EPL) became the first competitive cricket event for players to showcase their talent. His 28-run-cameo playing for Kantipur Gurkhas was enough to get the glimpse of his solid technique and temperament playing in a high-pressure tournament.

“My career started from EPL. It was special for me. I got selected for Nepal U-19 team for Asia Cup. So, it was like a gateway for me,” said Sah in a conversation with Republica. Under the guidance of proven coaches such as Binod Das (Nepal U-19 head coach), Kalam Ali (the EPL winning Panchkanya Tez coach) and Dipendra Chaudhary (former Nepali all-rounder) the budding talent Anil Sah prospered at Nepal Cricket School (NCS). Sah was eventually included in the U-19 squad of Nepal for U-19 Asia Cup held in Sri Lanka in 2016.

The 19-year-old’s best innings came against Afghanistan in ACC Youth Asia Cup held in Malaysia in November 2017. Nepal was bundled out for 103 runs in 28 overs in the match. As a testimony of his talent, Sah made 50 including seven fours and a six in 57 deliveries he faced at the crease. The next best individual score was eight runs by Pawan Sarraf, 14 of which came from extras. He fell to Mujeeb Ur Rahman, who picked up 6 for 28 in the match.

Mujeeb went on to make his Afghanistan debut, picking his first 5-wicket-haul, in a recently concluded ODI series against Test nation Zimbabwe. Last month, Mujeeb was purchased by IPL outfit Kings XI Punjab for IRs 40 million for the forthcoming season.

Sah started as an unknown player for Kantipur Gurkhas in EPL-I and was adjudged player-of-the-match in the final of EPL-II, delivering the title to Biratnagar Warriors. He exhibited tremendous character when he took up the ball for the first time in the tournament after Hong Kong international Anshuman Rath failed to cope with the pressure of the final match and conceded 36 runs in his only over of the match, defending the target of 150. Sah picked up two wickets in the match and kept his cool to defend nine runs in the final over. Sah had also made 22 runs earlier in the first innings. Paras Khadka, the Biratnagar Warriors and Nepal national team captain, was his closest spectator and admirer.

It was a sort of final nail in the coffin when Anil made it to the national team. He was first drafted in as a replacement player for his U-19 captain Dipendra Singh Airee for the final round of ICC World Cricket League Championship in the United Arab Emirates. He was then selected for ICC World Cricket League Division Two squad along with Paudel in expense of outgoing Sagar Pun and Binod Bhandari. In the only outing he had for Nepal, he was dismissed for a golden duck opening the batting for Nepal. In red-hot form, Kenyan fast bowler Emmanuel Bundi Ringera was his nemesis.

Another Nepal versus Afghanistan fixture is approaching with plenty of stakes associated -- from World Cup berth to ODI status. Nepal senior team is set to face Mujeeb for the first time in a Group B match of ICC CWCQ. Nepal could do with handing some matches under Sah’s belt replacing the out-of-form batsman in the XI.

Sah may or may not be the next big thing in Nepali cricket as Mujeeb is for Afghanistan, but he is somebody to watch for. After all, he had stood tall in a match against Mujeeb while his colleagues were falling in front of the Afghan bowler like a pack of cards.

The curious case of unmarried mothers

When her parents heard that she was pregnant, they did not congratulate her. She wasn’t married. It would tarnish her... Read More...

KATHMANDU, Jan 10: The Commission for Investigation of Abuse of Authority (CIAA) has filed a case against suspended lawmaker and former... Read More...

Fire breaks out at Soaltee City (with photos)
18 hours ago

IN PICS: People march in capital, calling for restoration of monarchy in Nepal
20 hours ago

Remembering Osho on his Mahaparinirvana Day
56 minutes ago