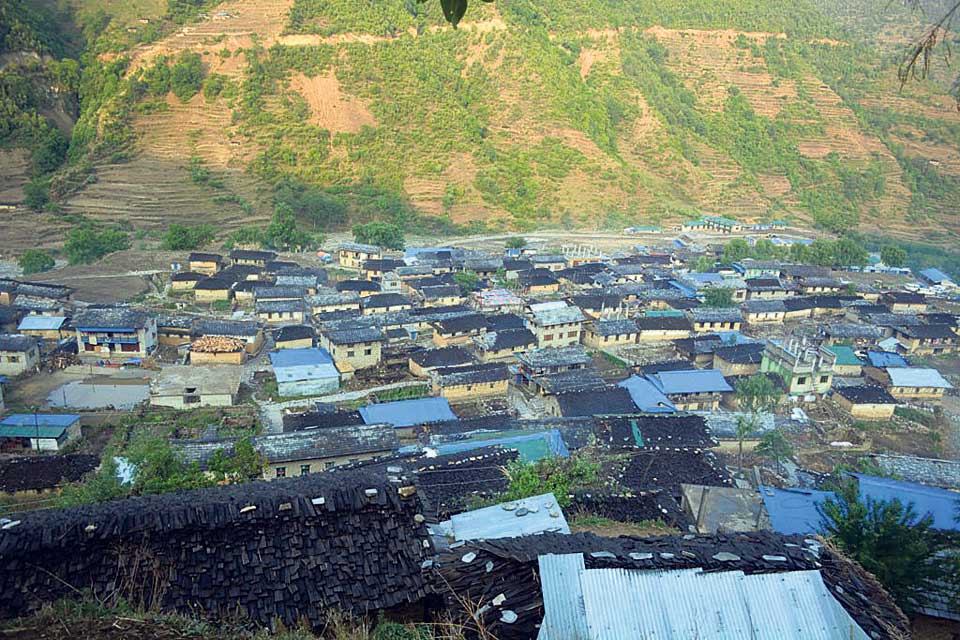 This bird’s eye view of Thabang village of Rolpa shows traditional houses in the settlement considered as the birthplace of Maoist insurgency. Photo: Republica Files

"One of our biggest hopes of boosting our economy is tourism. However, if we fail to maintain the beautiful and original looks of our village, we can't expect tourists here," he Darjit Rokka, a local of Thabang.

ROLPA, Feb 15: With concrete houses fast displacing the traditional ones having thatched roof, Thabang of Rolpa is losing its original look. The locals are building houses with new technology. This, however, has disappointed the locals who want to preserve their identity.

"We are losing identity as our houses gave a distinct feature to the village. The settlement used to look beautiful but now it is turning a concrete jungle," said Darjit Rokka, a local of Thabang. "This is going to affect us in many ways."

Rokka expressed concern that the changes might adversely affect tourism. When originality is not kept intact, tourists won't feel special while visiting Thabang.

"One of our biggest hopes of boosting our economy is tourism. However, if we fail to maintain the beautiful and original looks of our village, we can't expect tourists here," he said. "Why would they come and stay here if we lose our originality? We are really worried that we are fast losing our identity. This has taken toll in Thabang's beauty," he added.

Apart from the landscape, Thabang is noted for its unique houses. It was not their choice to build the houses of bricks and stones but a compulsion. However, the houses gave a different look to Thabang.

"Our settlements could be identified from far away. Thabang no more looks like Thabang," he lamented.

A few more locals like Rokka have been voicing against 'insensible' modernization. They have urged the local government to take measures to preserve the beauty of Thabang.

"We have been raising voice and meeting the local representatives. We need to come up with some measures in order to stop this disastrous modernization. We should keep our originality intact," Rokka said.

The people of Thabang have asked the local government to conserve the traditional houses and mark separate area to build new houses. If this is done, both modernity as well as originality will coexist in Thabang, they insist.

"We cannot stop people who are keen to build new houses of their choice. But the local government can make some guidelines," said Rokka. "For instance, we have suggested that certain area be separated for new infrastructures and old houses be conserved, renovated wherever needed," he added.

The idea of modern settlement elsewhere is also being considered by Thabang Rural Municipality. It is not just the demand or concern of the locals, but also of the municipality, stated Bir Bahadur Gharti, the municipality chair.

"We all are worried over how to conserve our village. We can't afford to lose our culture and tradition. But things are challenging," said Gharti.

Gharti stated that the municipality office can do nothing as everyone has the right to build their house as per their choice and economy. The government needs to formulate proper plan to make people follow certain rules or criteria. "But right now, we don't have any such plan."

According to him, some locals are extremely concerned over the issue and want to preserve the traditional looks of Thabang. However, some others are indifferent.

"For sensitive and wise people, it's not a big deal if the government imposes some rule. But not everyone is that cooperative," Gharti noted. "So, even though we are worried, we are not able to do anything about private property of people."

Thabang is also considered at the birthplace of Maoist insurgency. It was from where the decade-long People's War began. After the rebels joined peaceful politics, it was expected that they would do something for Thabang's development. However, Maoist leaders have failed to impress the locals of Thabang. They have always accused the leaders of only using Thabang for their political interest. The locals even boycotted elections in the past. The last local level election had however raised their hopes and they participated in the voting process. According to Gharti, people have a very high expectation from the local government which is hard to meet.

"We have to come up with solid plans. People have high hopes on us," he said. "We all should think of tourism and should take steps so that we can bring in maximum number of tourists here. If all stakeholders are convinced, we can definitely conserve our tradition, our nature, and wildlife," he stated.

Compounding the modernization challenges China faces, its working-age population is beginning to decline, and could fall by more than 10... Read More...