KATHMANDU, July 12: The CPN-UML Task Force members have finalized a 10-point proposal to end disputes seen within the party just before the verdict of Supreme Court (SC) on the House of Representatives (HoR) dissolution case.

The 10-point agreement finalized on Sunday night has been sent to the party Chairman KP Oli and rival faction leader Madhav Kumar Nepal. Sources close to him said senior leader Nepal is miffed by the attempt of leaders close to Oli to publicize the proposed agreement a day before the final verdict of the Supreme Court on parliament dissolution case in an apparent bid to influence the apex court’s verdict.

A task force formed to resolve disputes within the party proposed a 10-point proposal after several meetings held in the past few days.  The proposal will now be forwarded to Prime MinisterOli and senior leader Nepal.

Ganashyam Bhusal, a member of the task force, made the 10-point proposal public after holding repeated meetings with senior leader Nepal.

The Task Force said that the party has agreed to end the situation immediately and resolve the existing problems as this division in the party could not only weaken the internal life of the CPN-UML but also could invite serious political instability in the country.

The task force has also agreed to move ahead by resolving the differences seen in the party in a lawful manner and resolve the main disputes amending the legislations, if required.

Similarly, the agreements, political and organizational activities --conducted after the revival of the CPN-UML by the decision of the Supreme Court -- that are not in line with the party's statute and against the spirit of party unity will be automatically scrapped.

Likewise, leaders, who decided to stay in the UML after the split of erstwhile Nepal Communist Party (NCP) will be given the same responsibility he/she held before the Supreme Court’s decision to invalidate the NCP unity. Also, the Task Force members have agreed to act in lawful manner and move forward as per the party’s decision regarding the HoR dissolution case that is currently sub-judice at the apex court. 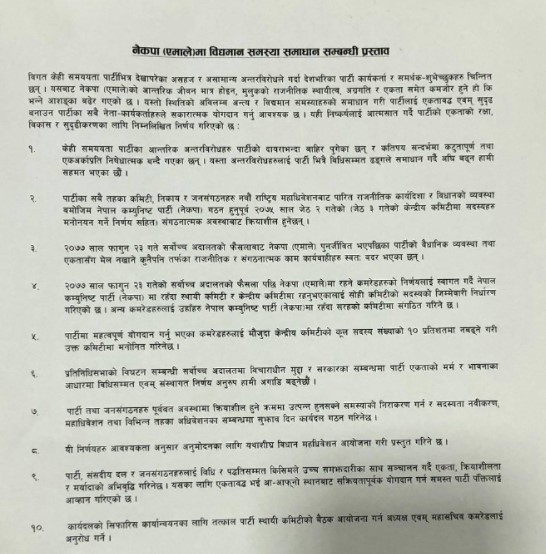 KATHMANDU, Mar 31: The Left Alliance had pinned hopes that a party merger would be in place before Prime Minister KP... Read More...