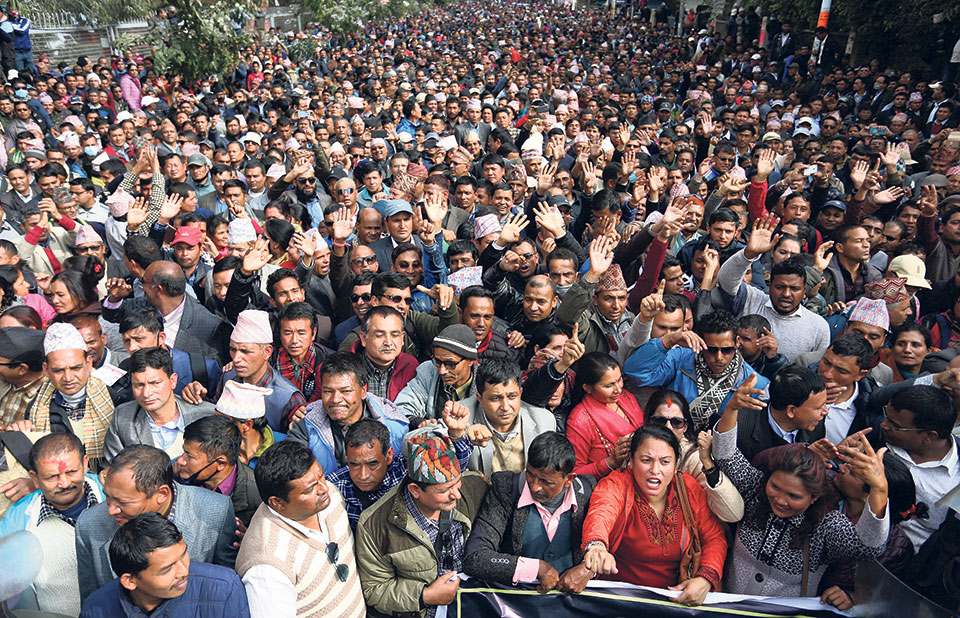 Government teachers at the protest rally organized at Bhrikutimandap in the capital on Friday. | Photo: Republica

KATHMANDU, Dec 1: The teaching-learning process at 600 government schools in the Kathmandu Valley was affected on Friday as the government teachers gathered at Bhrikutimandap in the capital to join protests organized by the Confederation of Nepalese Teachers (CNT).

As part of the protests launched by CNT two months ago, the government teachers in the Valley did not go to their schools on Friday and staged protest rallies, demanding that the government fulfill their 26-point demand. Their demands include not allowing the local units to oversee public schools, appoint 23,000 teachers under relief quota in the government quota of teachers, allocate 20 percent of the national budget to the education sector, provide rational salaries to Early Childhood Development (ECD) teachers and form a national education commission.

About 25,000 teachers working at government schools across the country gathered in the Kathmandu valley, 'boycotting' their classes today, according to the CNT.

“This is a shameless act by the government teachers,” said Suprabhat Bhandari, former president of the Guardians' Association Nepal, “But sadly, neither the student unions nor other stakeholders including the government said anything against this sheer violation of children's right to get education,” said Bhandari.

CNT President Babu Ram Thapa, however, said that they were forced to protest against the government as it did not care about improving the quality of education at public schools.

"Public schools should be managed by the federal and provincial governments instead of the local governments. The government should allocate 20 percent of the national budget for the education sector,” Thapa said, “About 23,000 ECD teachers across the country are paid just Rs 6,000 each a month. They should be paid rationally.”

Thapa further said that they would continue their protest until their demands were addressed. “We are trying to improve the education sector and will continue our protests till the end,” he said.

PM Oli fails to secure parliament’s confidence, what next now?
17 hours ago