TBM put to work for tunneling in Bheri-Babai project 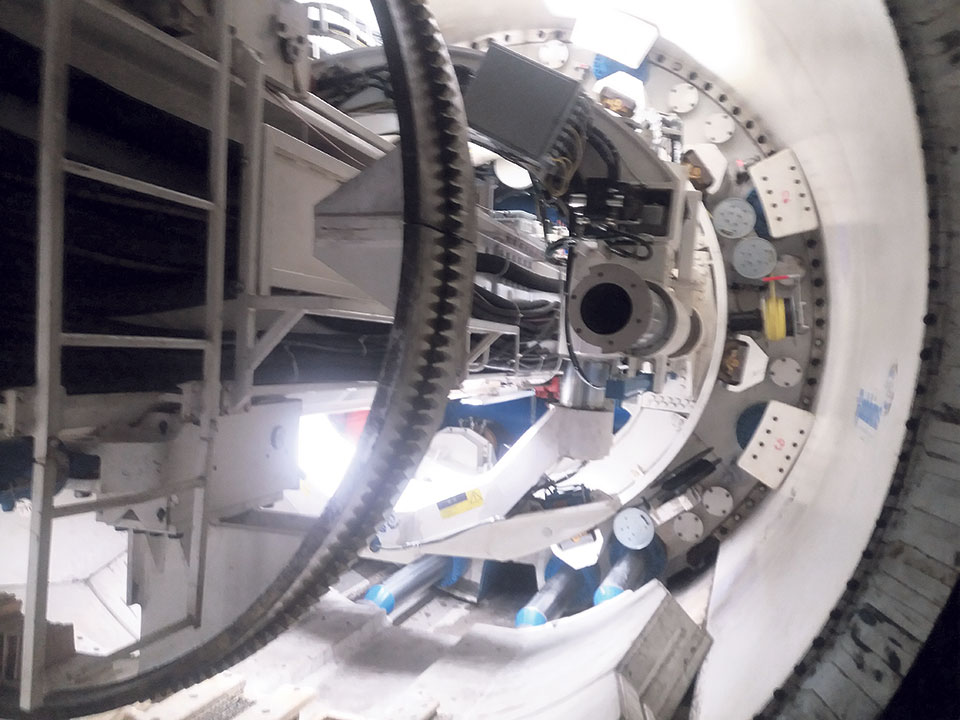 A Tunnel Boring Machine is seen digging the 12-kilometer-long tunnel for the Bheri-Babai Diversion Multipurpose Project in western Nepal.

KOHALPUR, Oct 23: The tunneling work at Bheri-Babai Diversion Multipurpose Project, a national pride project, has been started with the use of Tunnel Boring Machine (TBM). The machine, imported from China, is regarded an important value addition to the project, which has raised hopes of the contractor to complete the project work on time.

The TBM, which was brought to the project site at Hattikhola of Surkhet district, was put to work from October 16, according to the contractor.

Earlier, laborers had dug a total of 150 meters of the tunnel before the machine was brought to the project site. State Minister for Irrigation, Sanjay Gautam, had officiated an event organized last month upon arrival of the TBM into the country. Parts of the TBM were assembled here and the machine was put to work after 20 days of its arrival in the district.

Li Chyang, the in-charge of China Overseas Engineering Group Co Ltd (COVEC), the Chinese contractor of the tunneling work, informed that they have started using the machine for digging the 12-kilometer-long tunnel that will divert the water of Bheri River into Babai, which will be used for irrigation in Bardiya and Banke districts.

The machine can dig about 20 meters of tunnel a day. “The TBM takes one and a half years to dig 12 kilometers of the tunnel,” Chyang said: “We operate the machine 18 hours every day, and we have a target of completing the 12-kilometer-long tunnel within two years.”

Cement pipes will be fitted in place after digging the tunnel to make it ready for diverting river water. Three Russian technicians are helping with the assembling and operation of the machine. A total of 90 Chinese officials and technicians are working at the project site, apart from about 500 Nepali nationals who are employed in the project.

The COVEC brought the machine from China’s Shanghai to Nepal via the Kolkata port. The height and width of the tunnel are both 5.6 meters. The project management team hopes to complete the project work within the stipulated time with the machine in place.

The project comprises of three phases: the first phase consisting of construction of the tunnel, the second phase of generating 48 MW electricity and connecting it to the national power grid, and the third phase of irrigating parts of Banke and Bardiya districts. On the completion of the project, 51,000 hectares of land in the two districts will have irrigation facilities throughout the year.