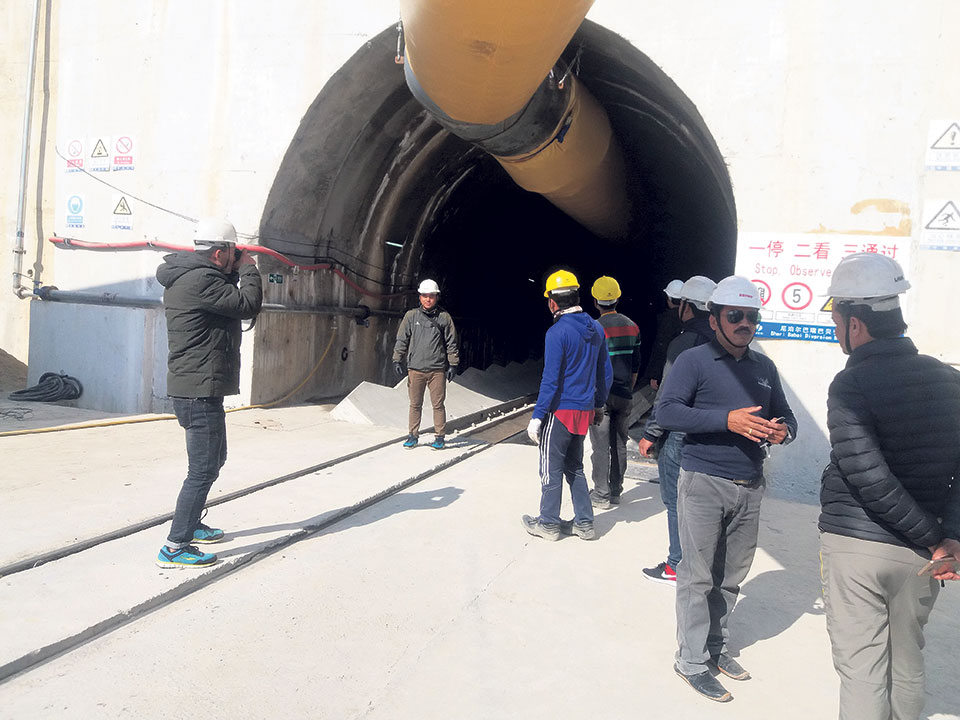 SURKHET, Jan 5: Rabin Khadka of Ganeshpur, Nepalgunj, a Nepal Police personnel, is on holiday. Having heard that a machine is digging the tunnel in Bheri-Babai Project, he went to the project site at Hattikhal, Surkhet, on his motorbike.

“Wow! This is interesting,” said Khadka while taking photos from the opening of the tunnel. “Development in Nepal should be like this.”

Khadka’s friend Samrat Khatri of Ghumkhaharey, Surkhet, who is working in Nepal Army, was also astonished to see the tunnel and the Tunnel Boring Machine (TBM). Despite living very near to the project site, Khatri had not been able to project the site as he was stationed elsewhere.

“When my friend informed me about the TBM and the project, I was curious to visit the place. The method and the speed of digging tunnel left me astonished. I am glad to see such technology in Nepal,” added Khatri.

The multi-purpose project designed to generate electricity and provide irrigation facility by diverting the water of Bheri to Babai River has not only given a pace to the country’s development, but has also contributed in tourism industry by attracting domestic tourists to the project site.

Hundreds of people like Rabin and Samrat come to Hattikhal every day to visit the project site, especially to see TBM in action.

According to the project office, students and teachers of engineering colleges, overseers and investors have been visiting the project site for field study. “Since TBM is a new technology for Nepal, the project site has become a study field for all sorts of people associated with tunnel construction,” said Rukmangat Khanal, a senior engineer of the project, told Republica.

Engineering teachers and students as well as contractors are studying the TBM with more attention since the machine is going to be used in various projects in the country in the coming days.”

The office has even deputed an officer, Ganesh Shrestha, to guide visitors at the project site.
“We are receiving around 100 visitors a day. On public holidays, the number of visitors swell to as high as 500,” Shrestha.

The project has already dug 1,200 meters of the 12-kilometer tunnel. “The initial 150-meter segment was dug manually, while the TBM dug the remaining 1050 meters,” Khanal said, adding that 20 percent of the estimated cost of Rs 10 billion has already been paid to the contractor. “The work progress is satisfactory. If work progresses at this rate, we can complete the project by March, 2020,” he added.

TBM put to work for tunneling in Bheri-Babai project

KOHALPUR, Oct 23: The tunneling work at Bheri-Babai Diversion Multipurpose Project, a national pride project, has been started with the use... Read More...