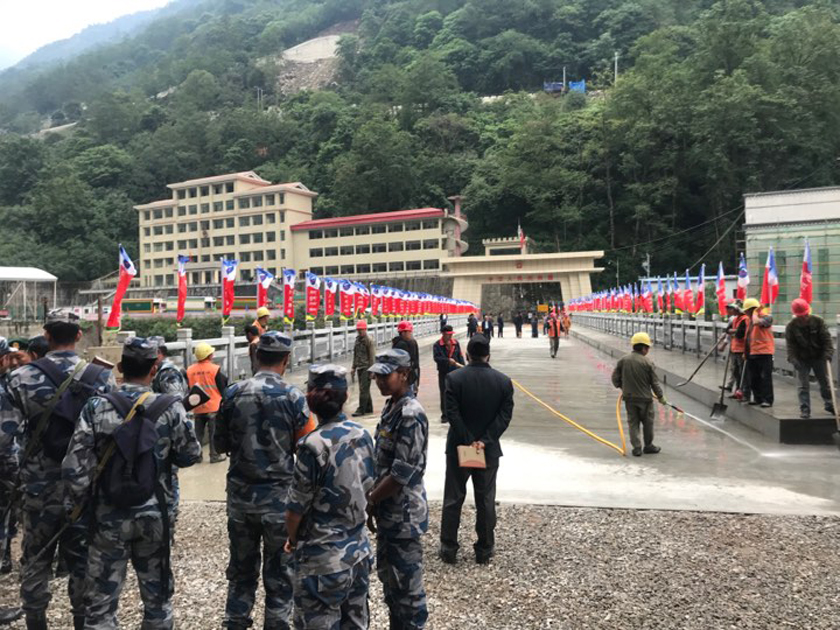 SINDHUPALCHOWK, May 29: The Tatopani border point, Nepal's vital and the oldest trading point with the northern neighbor China that was closed following the April 2015 earthquakes, is set to reopen from Wednesday. Until the earthquake, goods worth around 20 billion would be traded through the border annually earning the country over Rs 5 billion in taxes.

According to Nawaraj Dhakal, spokesperson at the Ministry of Industry, Commerce and Supplies, the Tatopani border point will formally reopen and trade will resume from the customs point from Wednesday. "On Wednesday, there will be formal announcement of the reopening of the border and trade will resume," he said.

Minister for Industry, Commerce and Supplies Matrika Yadav and Chinese Vice Minister Zhang Jiwen will jointly make a formal announcement of the reopening of the border. The duo is set to cut ribbon at the Friendship Bridge at the border point. On the occasion, six Chinese cargo trucks laden with wool will enter Nepal.

The formal function, which will be attended by several important officials from Nepal and China will be held from 11 am to 1 pm. Except for Minister Yadav, lawmakers Agni Sapkota and Sher Bahadur Tamang and government secretaries will also attend the function. While officials from the Chinese Embassy in Kathmandu have already arrived at Tatopani on Tuesday, the Nepali team led by Minister Yadav will fly to Tatopani at 7 am Wednesday.

The border had been temporarily reopened in 2016, but was closed again. It is formally coming into operation now after the completion of construction of a dry port at Larcha, some bridges and roads with Chinese assistance. The dry port sprawls over 90 ropani of land. The Chinese government spent Rs 1.2 billion in the infrastructures.