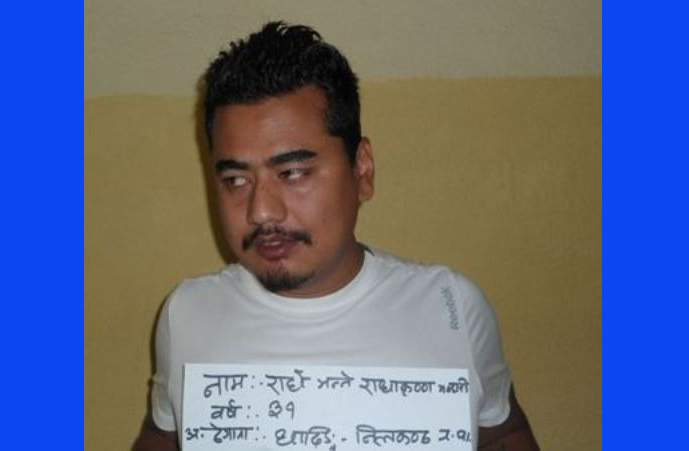 During a press conference held at Nepali Congress Headquarters on Saturday, Tarun Dal Chairman Jitjung Basnet demanded the government to ensure the safety of Bhandari, the district vice president of the organization.

"Bhandari was arrested and taken into police custody for his alleged involvement in a dispute at Tutedobhan of Rorang rural municipality, Dhading on June 6 after a local resident Janak Magar filed a fraud case at the police station," he said.

"The police have arrested Bhandari even though he was not involved in the dispute," Basnet said.

Basnet claimed that the police are hatching conspiracy to murder Bhandari. "We will be forced to launch protest against the police administration to save the life of Bhandari," he said. Basnet also warned to stage a nation-wide protest if Bhandari is not set free.

Notorious gangster Radha Krishna Bhandari alias ‘Radhe’ was arrested by Dhading police on June 5 from Gajuri rural municipality-2 of Dhading along with weapons.

According to District Police Office (DPO) Dhading, the police team had reached the site when the gang members were trying to threaten the locals showing weapons. After an encounter with police, the gang members of ‘Radhe’ tried to attack the police, informed DPO, Dhading. Police have also arrested few other gang members along with Bhandari.

BHAKTAPUR, June 3: Family and relatives of Deepak Khyaju of Nikosera of Madhyapur Thimi Municipality-9 in Bhaktapur who was killed... Read More...