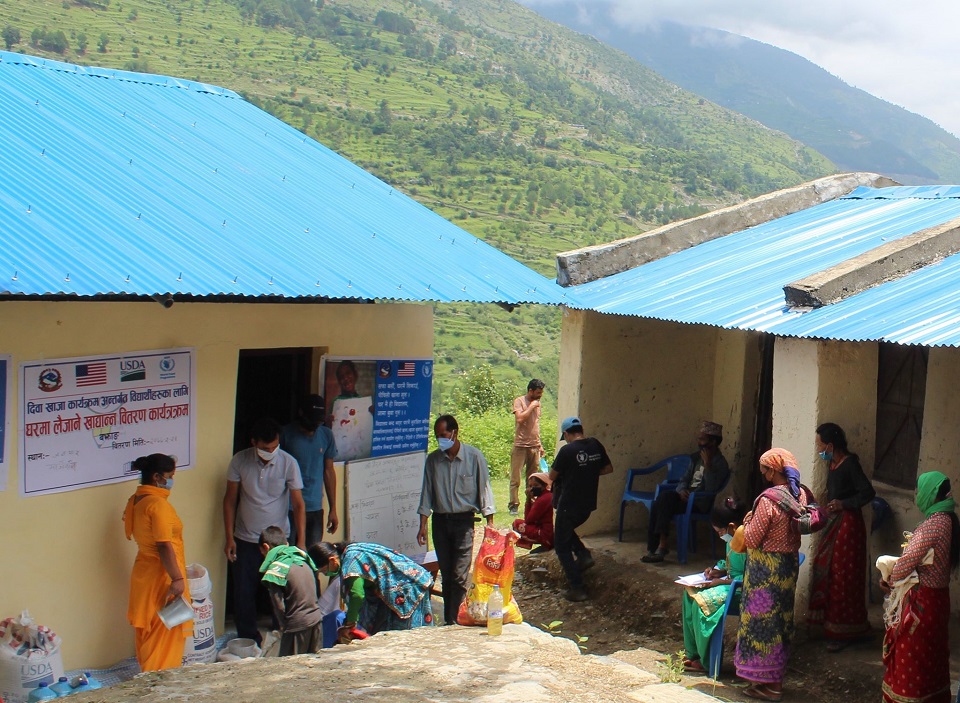 KATHMANDU, Aug 5: Fortified rice, lentils and vegetable oil, totalling to nearly 1,500 MT, donated by the United States have been distributed by the UN World Food Programme (WFP) and the Government of Nepal to school children (from Grade 1-8) in rural areas, according to the WFP.

The children are missing out on nutritious school lunches they used to receive in Sudur Paschim and Karnali provinces after schools were closed following the decision of the government to enforce nationwide lockdown on March 24 to contain the spread of Coronavirus (COVID-19). “The closure of schools is putting the future of millions of children around the world at risk, affecting not only their ability to learn but also their access to nutritious food and health-support schemes,” said the WFP in a statement on Wednesday.

Since March, 2.4 million children in Nepal have been missing out on the nutritious lunches they used to receive at school — the only proper meals many of them could count on.  The donation from the United States will support 150,000 of the most vulnerable households in the area.

“The United States is proud to stand together with Nepal in supporting and protecting the most vulnerable among us. Our partnership with the United Nations World Food Program and the Government of Nepal to distribute rations to school children in Sudur Paschim and Karnali provinces will help 150,000 families through these difficult times,” the statement quoted US Ambassador to Nepal Randy Berry as saying.

Since 2005, the U.S. Government’s (USG) McGovern-Dole Food for Education and Child Nutrition Program, which is administered by the U.S. Department of Agriculture (USDA), has been supporting the WFP school meals programme in Nepal. With a total contribution of more than $81 million, McGovern-Dole has helped over 250,000 children access daily nutritious lunches through WFP’s school meals programme, said the statement.

“The lockdown has put a far greater burden on parents to provide their children with balanced and nutritious meals at home,” the statement quoted WFP Country Director and Representative Pippa Bradford as saying. “These take home rations will provide an interim respite for these families until children return to school – while facilitating at-home learning. We are thankful to the United States as our long-standing partner in support of school children and rural families in Nepal, especially in these uncertain times.”

In order to shift to long-term, nationally run school feeding programs, WFP has started handing over McGovern-Dole supported schools to the government, with about 95,000 students already integrated into the national school meals programme to date. WFP, with the support of the USG, has made extra efforts to ensure and widen the supply of local food to schools and expand community ownership. Home Grown School Feeding, a programme also supported by USDA, has focused on linking school meals to local agricultural production.

Dealing with children with learning disability

A few years ago, during an interaction with school children, I noticed a few children behaving differently. I thought they... Read More...

Growing internet addiction among kids: a headache for society

Father arrested on charge of raping daughter
3 hours ago