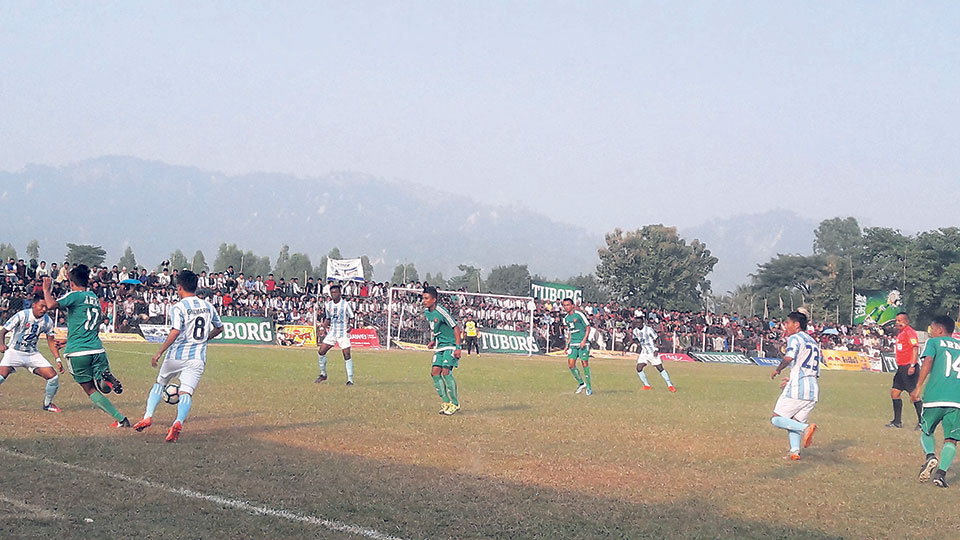 Players of Tribhuvan Army Club (green) and Manang Marshyangdi Club in action during the final match of the Shatakshi Gold Cup Football Tournament in Jhiljhile, Jhapa on Thursday.

Striker duo Prince George Karki and Nawayug Shrestha netted one each goal for TAC while Anil Gurung replied for MMC in the match played in Jhiljhile of Jhapa.

Champion TAC earned a purse of Rs 500,000 while the runner-up MMC was given Rs 250,000.
TAC took an early lead in the 18th minute with Karki scoring through a free-kick. TAC earned the free-kick after MMC’s African recruit Sallah Sulaiman fouled on Nawayug Shrestha who later on doubled the tally.

National team striker Shrestha scored off a brilliant header utilizing the pass from Bimal Rana in the last minute of the first half. However, TAC’s players protested over the goal, which halted the match for one hour.

In the second half, MMC tried to make a comeback in the match with skipper Gurung’s goal in the 61st minute but that couldn’t save his team from the defeat.

MMC’s Bishal Rai was declared as the best player of the tournament. He received a cash award of Rs 50,000.

Likewise, MMC’s Dona Thapa was announced the best midfielder. Highest goal-scorer Shrestha was given Rs 25,000 while other best players in different categories, along with the best coach, got Rs 20,000 each.

A total of 10 teams including six A Division sides, host Shatakshidham Sporting Club and Diamond of Football Academy (India) took part in the tournament that began from November 14.