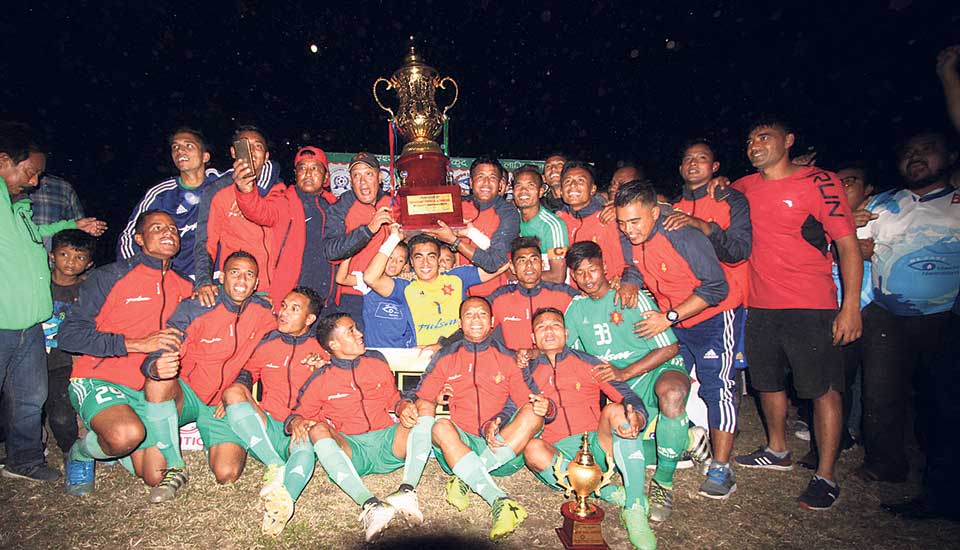 TAC had won Bishal Memorial Gold Cup Football Tournament beating Sankata Club in Birgunj in April, which was its first title of the year.

Meanwhile the final match played at Kakarbhitta School’s ground was pushed to the penalty shootout after it ended in a goalless draw in the regulation time.

MMC’s goalkeeper Dinesh Thapa also saved two penalties as he foiled the attempts of TAC’s Jitendra Karki and Padam Tamang. But other three players of TAC including Nawayug Shrestha, Santosh Tamang and Bibek Basnet scored from the spot as the departmental side clinched the trophy.
After guiding his team to the title of tournament that has the highest cash prize among the competitions organized outside the Kathmandu Valley, head coach Nabin Neupane said goalkeeper Kuthu made a big difference.
“Despite dominating the match, we couldn’t produce the goals which pushed the match to the penalties. And Kuthu made a big difference and led us to the victory,” said head coach Neupane.

MMC head coach Bijay Ghale said that his midfield and attack were disappointing in the final match. “Our midfield created  little chances throughout the match which was missed by strikers. Tie-breaker is all about luck and it wasn’t in our side today,” said head coach Ghale. He had sent Anil Gurung and Nirajan Malla to the pitch in extra time keeping penalties on mind, but both of the players failed to score from the spot.

Likewise, semifinalist Kakarbhitta Training Center’s Bhushan Rai and MMC’s Bishal Rai were given the best defender and midfielder awards. Best players and coach got Rs 20,000 each. Dinesh Henjen of the same team was declared the highest goalscorer with two goals while Kakarbhitta Training Center’s Milan Rai was announced as the rising player. Henjen was rewarded with Rs 25,000 while Rai got Rs 10,000. National Sports Council (NSC)’s Member Secretary Keshav Kumar Bista distributed the prizes.

Animals are killed brutally time and again, but perpetrators are hardly booked
53 minutes ago