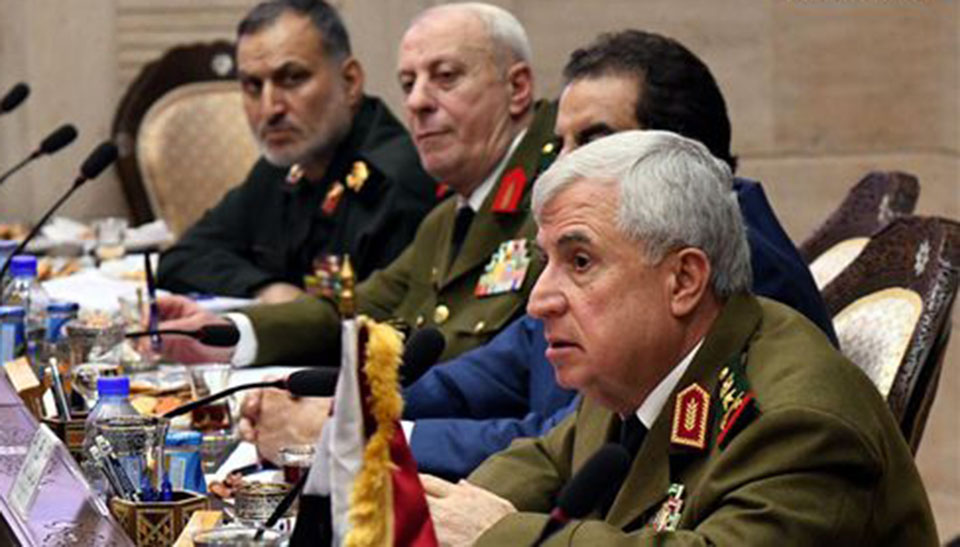 DAMASCUS, March 19: The military commanders of Syria, Iran and Iraq discussed in the capital Damascus on Monday issues, including the coordination to counter terrorism, opening borders, and restoring all Syrian areas.

Ayyoub said on Monday that the U.S.-backed Syrian Democratic Forces (SDF) will face two options: either to embark on reconciliation with the government, or the areas under their control will be retaken by the Syrian army by forces.

The Syrian official said that the Syrian state will completely wrest control over all of Syria sooner or later, noting that there will be no inch of Syria out of the government control.

"The only card in the hands of the U.S. and its allies is the SDF and it would be dealt with in accordance with the two ways adopted by the Syrian state either through reconciliation or liberating the areas that they control by force," he said.

He also mentioned Idlib, the last major rebel stronghold in Syria, saying that Idlib province will return sooner or later.

The Syrian government has for long said that it would retrieve Idlib from the ultra-radical rebels. However, a planned military campaign was put on hold late last year when Russia, Iran, and Turkey agreed to a demilitarized zone in Idlib.

The Hayat Tahrir al-Sham (HTS), the umbrella group of the al-Qaida-linked Nusra Front, was supposed to leave, but on the contrary, it expanded and took control over all of Idlib, which renewed talks about a possible military campaign against the rebels in Idlib in northwestern Syria.

"There will be no inch out of the government control and that has been stressed by the Syrian president more than once but when and how is a military matter," Ayyoub said.

For his side, al-Ghanmi said that the three military commanders discussed the opening of border crossings between Syria and Iraq in their meeting.

The Iraqi official said that there is ongoing coordination between the Iraqi and Syrian government regarding the war on the Islamic State (IS) group, locally known as Daesh.

"We continued to hunt down the sleeper cells of the group by launching strikes inside Syria in coordination with the Syrian state to hit the supply routes and stocks of the enemy groups," he said.

Currently, he continued, "the border security is important between both countries because we always say that the security of Syria and Iraq is integral."

The Iranian chief of staff, meanwhile, stressed that there is active coordination between Syria, Iran, and Iraq regarding counter-terrorism.

"Without a doubt, these meetings with the presence of Iran, Iraq, and Syria stress that we are still united in the face of terrorism and against the hands of terrorism which are Daesh and other terror groups. We have high coordination and we will move forward with great determination," Bagheri said.

He made it clear that the goal in the current period is to enable the Syrian government to wrest control over all Syrian areas, noting that the foreign forces which entered Syria illegally, such as the United States and Turkey, will have to withdraw.

The Iranian official also stressed on the opening of the Iraqi-Syrian border to enable the Iranian merchants and tourists to visit Syria through Iraq.

The border crossings for Iran is a sensitive and important matter, for the trade exchange and the movement of visitors from Iran through Iraq to Syria, he said.

It's worth noting that the meeting between the three commanders is the first of its kind to take place in Damascus publicly.

Israel blamed for hit on Iran-backed militia depot in Iraq

JERUSALEM, Aug 23: Israel was responsible for the bombing of an Iranian weapons depot in Iraq lost a month, U.S.... Read More...