Suspension bridge still a pipedream for tuin users in Jajarkot 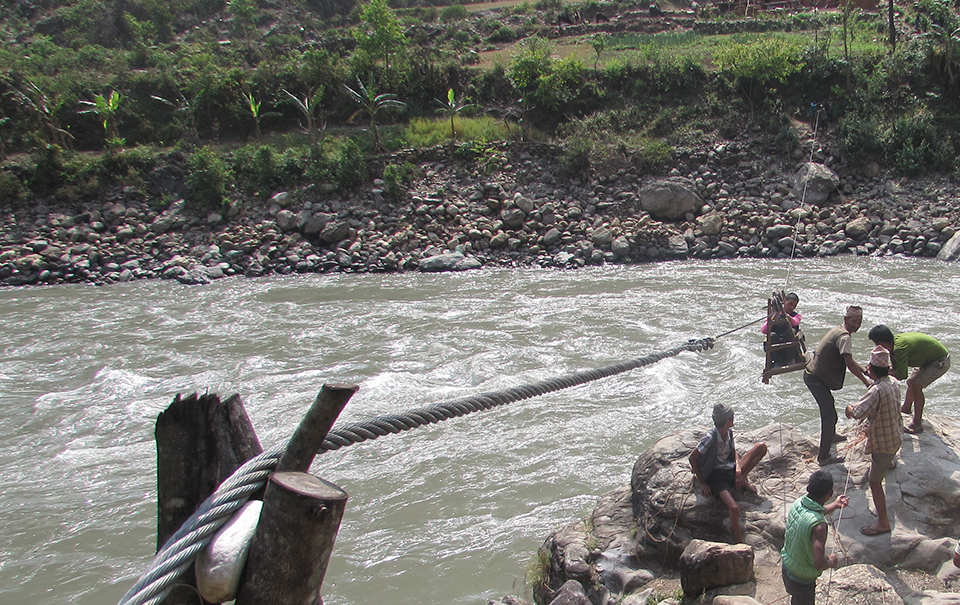 JAJARKOT, May 8: Pathbir Pun of Nalgad Municipality-1,Thulabagar has been crossing the Bheri river by clinging on to perilous cable crossings locally known as 'tuins' since years. He has been facing this ordeal not just in monsoon but also during other seasons of the year.

During his first stint as prime minister, KP Sharma Oli had announced in 2015 to replace the perilous tuins with suspension bridges. The announcement had raised hopes among the locals that they will finally get to cross the river through bridges. However, three years on, nothing has changed at all. Still many villagers in different parts of the country rely on cable crossings to reach the other side of deadly rivers.

Locals here use tuins to get to the market areas, the district headquarters and even for collecting timber and fodder.

"When will we get rid of this tuin? Which leader or politician will make us a bridge?” Pun questioned.

Hastakali Gharti of Thulabagar asks every government official, leader and elected representative visiting her village a question repeatedly, "When will we get to cross the Bheri on a bridge?”

Now 41 years old Gharti recalls how young she was when she first crossed the Bheri river through a tuin for the first time.

"Nothing has changed at all," said Gharti. Hundreds of people of the Dalit and Magar communities in Thulabagar have been risking their lives on a daily basis while crossing the Bheri River.

It's not that the locals have not asked for an alternative but in vain. Gulab Pun, another local, says if they chose not use tuin, they will be confined to their village alone. From elderly people to school-going children, all use this crossing to go to their respective destinations.

The locals of Thulabagar, Kharcha, Damsila, Bhitrakhola, Odara, Pali among others depend on tuins to cross the river. Civil Society leader Rajendra Bikram Shah says no government authority has paid heed toward solving the misery of people.

"The scene of school-going students crossing the river by hanging on tuins has not touched anyone yet," said Shah.

These people are using tuin which was first built 20 years ago. Heavy loads of goods, fodder and timber are also loaded in the cable crossing along with people.

Likewise, people of Shivalaya Rural Municipality also rely on tuins for crossing Chedagad river. Earlier, people here crossed the bridge by placing huge rocks over the river. Tek Bahadur Rawal, mayor of Nalgad, laments that he not just once but twice urged the federal government for a suspension bridge but nothing has been done yet.

"It is not possible for us to construct a bridge with our own budget," said Rawal.

Construction of 11 suspension bridges in Humla in limbo

HUMLA, March 27: Humla residents continue to risk life while crossing rivers in lack of safer bridges. They still depend on... Read More...

PARBAT, May 21: Jaimini, the southern part of Baglung has been connected with Phalebas, the district headquarters of Parbat, by... Read More...