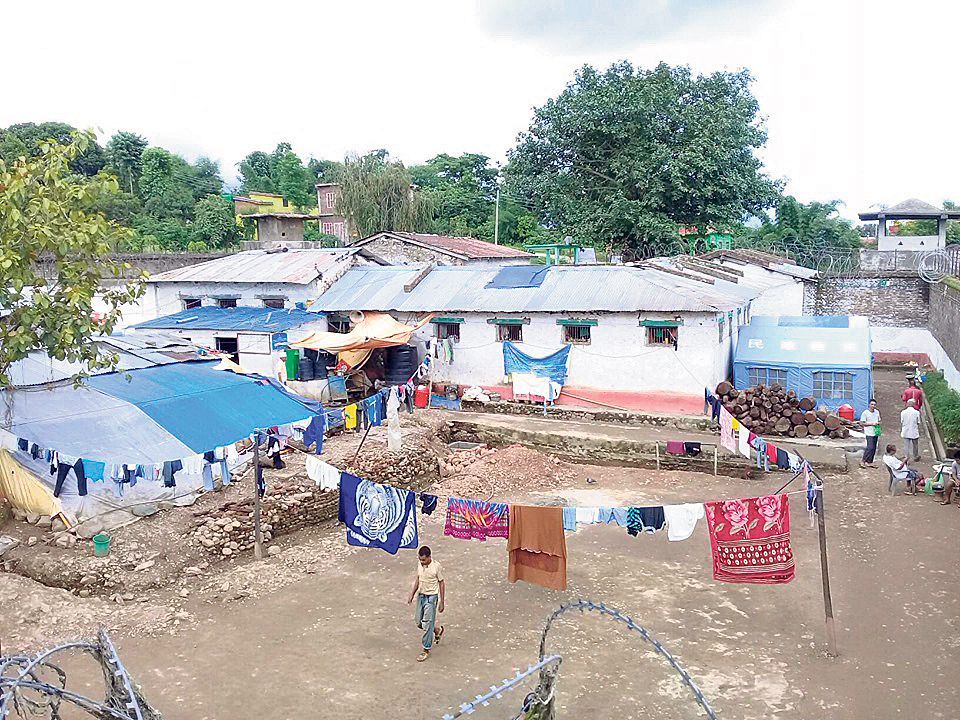 This recent photo shows the Surkhet District Prison with makeshift tents for inmates. The jail houses prisoners more than four times its capacity, making it one of the most overcrowded prisons in the country. Photo: Ganesh Bishu/Republica

BIRENDRANAGAR , Sept 15: The Surkhet District Jail houses detainees and prisoners more than four times its capacity, making it one of the most overcrowded prisons in the country. At present, 212 prisoners and detainees are kept inside the district jail against its capacity of 50 people.

Even though ministers and police chiefs on various occasions have committed themselves to improve the jails as correction homes, inmates here in the district jail have said they haven’t been able to feel that at all.

The jail has the capacity of 40 male and 10 female prisoners but there are 212 prisoners and detainees now and due to the lack of proper infrastructure, a large number of inmates have been kept in makeshift tents.

Laxmi Kharel, chief of the district jail, says 70 prisoners and detainees have to sleep inside tents and a makeshift structure made of corrugated sheets.

There have been problems as the inmates have to live inside tents and corrugated sheets, says a guard Keshav Saru . “The rooms are congested to sleep due to which they don’t get to sleep properly,” says Saru. There are three small halls and three rooms for prisoners and detainees to sleep. Prisoners and detainees of the jail say “the space however isn’t enough due to which we have to sleep in tents and under corrugated sheets”.

One of the prisoners of the jail says there have been problems in daily cleanliness, hygiene and sanitation because they have four times more people than the capacity of the place. According to him, “the number of toilets inside the jail isn’t enough for those living there due to which there is a line to go to the toilet.”

Kharel said that the construction of a new building started around 10 years ago and that it hasn’t been completed so far. “That’s why we are compelled to keep them inside tents and under corrugated sheets,” she said.

GM Construction stopped the construction of the building eight years ago. The district jail officials said that an agreement with another company has been initiated for the construction. The previous contractor had agreed on building it for Rs 33.6 million.

Thirty percent of the construction work has been completed. The new agreement is going to be finalized at Rs 29 million, said Kharel.

India provides Rs 1.54 billion to Nepal as a part of post-earthquake reconstruction assistance
19 hours ago

PHOTOS: Kathmandu during rain
21 hours ago

WEATHER ALERT: Rainfall to continue till Saturday
21 hours ago

“No one remains hungry, and no one dies of hunger,” reiterates PM Oli
28 minutes ago

WEATHER ALERT: Rainfall to continue till Saturday
21 hours ago