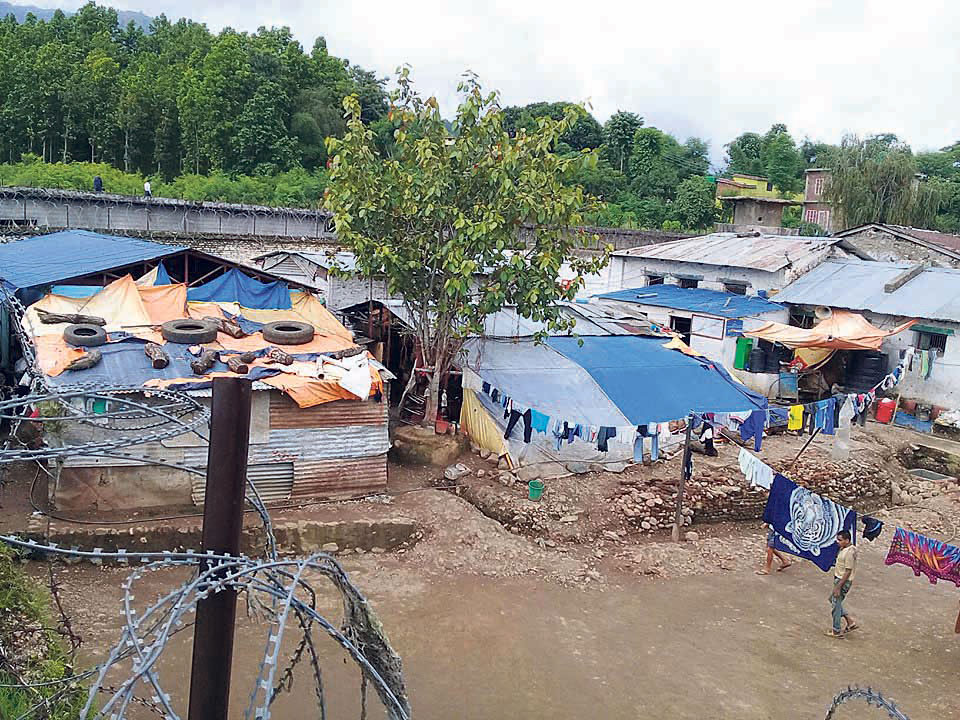 Makeshift tents and sheds erected on the premises of a prison in Karnali Province in this recent photo. All district prisons in the province except the one in Jumla are overcrowded. Photo: Ganesh Bishu/Republica

BIRENDRANAGAR, Feb 16: Although the Surkhet District Jail has a capacity of 50 persons, there are more than 250 prisoners in the jail at the moment.

The jail has a capacity to hold 40 male and 10 female prisoners, but at present, there are 259 prisoners in the jail. As a result, the prisoners are compelled to live in tents and sheds built on the jail premises.

The situation is much the same at the jail in Rukum. The jail has a capacity to house 25 prisoners, but there are 123 prisoners at present.

Apart from the prison in Jumla, all jails in Karnali Province have been housing more prisoners than their actual capacity.

“It has really been difficult to stay in tents,” said Keshav Saru, a security official at Surkhet jail. Saru further added that the rooms are small.

“The rooms are so small. As the jail can't hold all the prisoners, we [prisoners] are compelled to stay in tents,” said a prisoner, adding that there are no toilets as per the requirement.

“It has been difficult to take a shower and wash clothes. The situation has hit the prisoners,” the prisoner added.

According to Loknath Timsina, spokesperson for the Provincial Police Office, Karnali Province has jails to hold 70 female and 344 male prisoners. Currently, the jails in Karnali have 890 prisoners.

According to advocate Durga Prasad Sapkota, the jails in Karnali Province were built years ago when the population of the region was low. “The jails in the province should be upgraded. All the jails are in a sorry state,” he said, adding that the capacity of the jails should be increased at the earliest.

SURKHET, March 11: A five-point agreement was reached between the Karnali provincial government and the agitating Badi community after the... Read More...

BIRENDRANAGAR, Feb 27: As she was collecting fodder, Kalpana Acharya fell from a tree on February 16 and broke her... Read More...