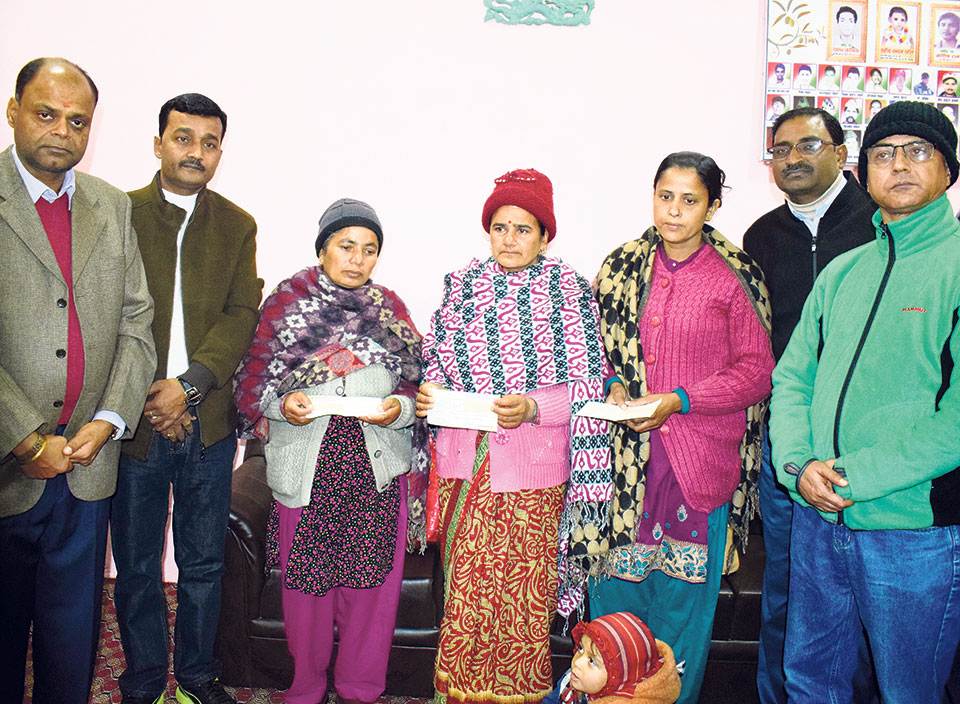 BIRGUNJ, Feb 2: The family members of those killed in the massive fire at Super Gas Industry at Sukchaina, Birgunj-18, in December last yer have received financial help from various stakeholders of late.

Pradip Yadav, the lawmaker from Parsa-1 offered the victims' families a financial relief of Rs 100,000 each on Friday. A day before that, the mayor of Birgunj Sub-Metropolis, Bijay Sarawagi offered the victims' families a financial help of Rs 200,000 each. On December 19, a deadly fire that broke out at the LPG bottling plant killed three fire fighters. Three fire extinguishers had jumped into the blazing fire in order to stop it from spreading, unfortunately they lost their lives. Though two had died on the spot, one of them died during the course of treatment in Kathmandu.

After the incident, lawmaker Yadav had immediately announced to provide a relief of Rs 100,000 each to the families of the deceased and Rs 50,000 each to the injured. As promised earlier, he handed over the checks with the relief amount to the victim's families on Friday. The function was also attended by Gopal Prasad Regmi, Chief Administration Officer of Birgunj sub-Metropolis and Nek Mohammad, Chairperson of the District Coordination Committee (DCC), Parsa.

"It was a great loss. I am offering this amount just as a respect to the courage shown by the fire fighters," said Yadav while handing over the checks to the victims' families. He also urged the victims' families not to hesitate to seek any kind of help from him in the future.

After getting engulfed in the fire, Yadav Prasad Adhikari of Lalbandi Municipality-7 and Madhusudan Mishra of Tanahun, Dumre, died on the spot while another victim Sanjiv Nepal died in the course of treatment, two days later.

According to Mayor Sarawagi, apart from providing the financial help, the sub metropolis will also take the responsibility of the education of the children of the deceased and one of the family members will also be provided with a job. Anil Tiwari, Communication Advisor at the Sub-Metropolis, said that the bottling plant has already provided the victims' families a relief of Rs 1 million each.
Caption: Families of the fire fighters killed in Super Gas Industry fire receiving financial help.

KATHMANDU, Jan 10: At a time when earthquake victims are struggling to get subsidized loans from bank and financial institutions (BFIs),... Read More...

10 poor families in Parbat get financial support for house construction

PARBAT, September 12: As many as 10 impoverished households at Bachha in Parbat district have been provided financial assistance to... Read More...