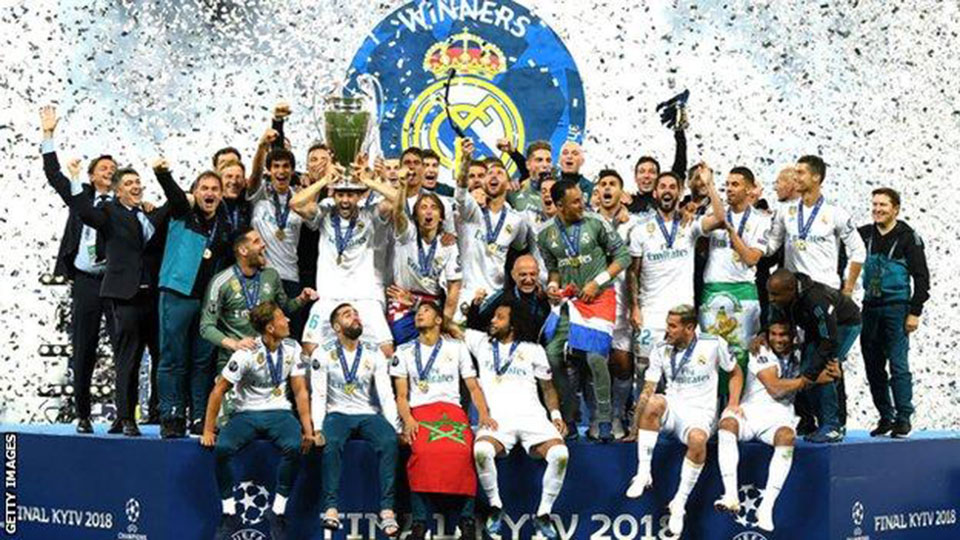 Real Madrid have become the first team to win the European Cup/Champions League in three successive seasons since Bayern Munich between 1974 and 1976. Photo Courtesy: getty mages

KIEV, MAY 27: Real Madrid forward Gareth Bale scored a jaw-dropping overhead kick and a long distance strike to give them a 3-1 win over Liverpool in the Champions League final on Saturday, delivering a remarkable third consecutive title for the Spaniards.

Substitute Bale, who also scored in Real’s 2014 final win over Atletico Madrid, had only been on the pitch for three minutes when he rose to meet Marcelo’s cross in the air from outside the box, sending it flying into the net to restore Real’s lead in the 64th minute at the NSC Olympic Stadium.

French forward Karim Benzema had put Madrid ahead in the 51st minute by sticking out a leg as Liverpool’s German keeper Karius attempted to throw the ball to a team mate, sending it trickling over the line, but Sadio Mane levelled from close range in the 55th for Juergen Klopp’s side.

Bale then sealed Madrid’s record-extending 13th European Cup win and piled more misery on Karius with a long-range strike in the 83rd minute which went straight through the hands of the hapless goalkeeper.

Real become the first side since Bayern Munich in 1976 to win the trophy three years in a row and Zinedine Zidane the is the first coach to win three back-to-back titles.

Liverpool’s talismanic forward Mohamed Salah was forced off in the first half with a suspected dislocated shoulder after tangling with Madrid captain Sergio Ramos, while Real defender Dani Carvajal also left the pitch in tears after getting injured before halftime.

KATHMANDU, Feb 24: Reluctance of government agencies to pursue the case of tax evasion against nine outlets of 'branded' goods in... Read More...