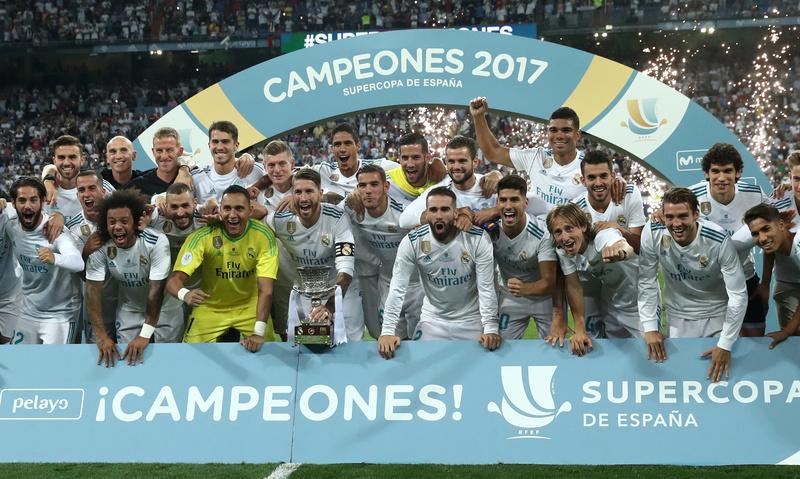 MADRID, August 17: Real Madrid won the Spanish Super Cup for the 10th time with a 2-0 win over rivals Barcelona at a joyous Santiago Bernabeu on Wednesday to complete a 5-1 aggregate victory that underlined their new status as Spain's dominant force.

Marco Asensio followed up his brilliant late goal in Sunday's first leg with a stunning effort from 30 metres in the fourth minute that proved a punishing blow for the Catalans.

Karim Benzema struck before halftime to seal the victory and Barcelona left the Spanish capital with home supporters' chants of 'champions' ringing in their ears.

Real, last season's Spanish and European champions, dominated throughout, toying with Ernesto Valverde’s side and showing no sign they were missing suspended forward Cristiano Ronaldo or Gareth Bale who was on the bench.

Lionel Messi and Luis Suarez both hit the woodwork but it was a bleak display for Barcelona, leaving Valverde with plenty of holes to patch before the start of the league this weekend.

Real, meanwhile, have started where they left off last season, by adding more silverware to their bursting trophy cabinet.

They clinched the European Super Cup last week with a 2-1 victory over Manchester United in Macedonia, adding to an already remarkable haul for coach Zinedine Zidane since he took over in Jan. 2016.

Coronavirus infection confirmed in 38 people on Wednesday
23 minutes ago

US Acting Assistant Secretary Trudeau in Kathmandu
44 minutes ago