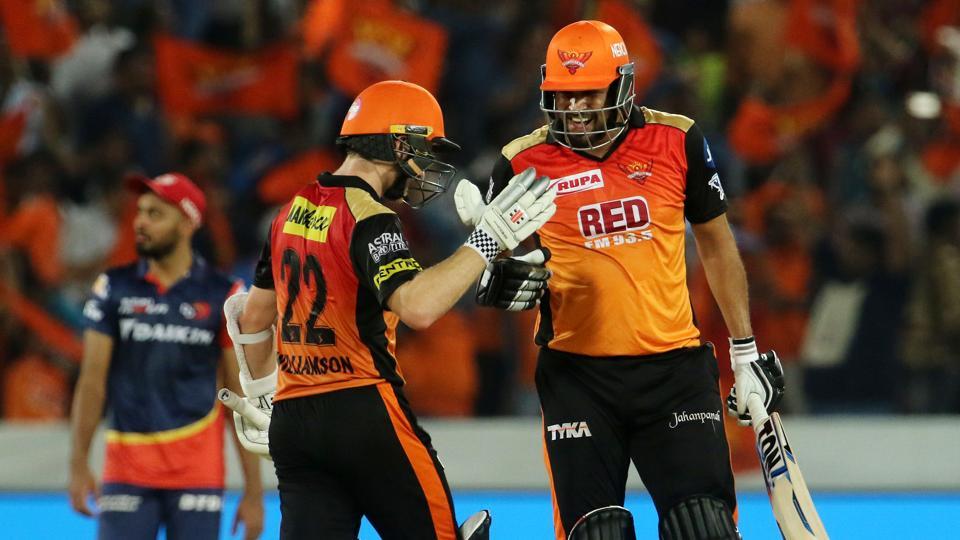 Sunrisers Hyderabad climbed to the top of the IPL 2018 table with a seven-wicket win over Delhi Daredevils.(BCCI)

Sunrisers Hyderabad were boosted by Alex Hales’ 45 and Yusuf Pathan’s aggressive 27* helped Kane Williamson’s side beat Delhi Daredevils by seven wickets and go on top of the points table.

Sunrisers Hyderabad have never been good chasers, having failed to overhaul any target above 150 in the 2018 Indian Premier League (IPL). It was different on Saturday as they reined in a target of 164 set by Delhi Daredevils to regain the top spot in the points table.

After Prithvi Shaw’s classy 65 off 36 balls took Daredevils to 163/5 in 20 overs on a slow track where batting wasn’t easy, SRH got the perfect start. Alex Hales was at the forefront as he made a 31-ball 45 and was involved in a 76-run opening stand with Shikhar Dhawan.

After hiccups mid-innings, the hosts were left needing 14 to win in the final over. But Yusuf Pathan hit Dan Christian for a six and four to take SRH to 164/3 with a ball to spare. It was their seventh win in nine matches while DD’s playoff hopes receded with their seventh defeat in 10 games.

Though Hales was bowled by a beauty from Amit Mishra in the ninth over, Dhawan and skipper Kane Williamson continued to take their team towards the target with a patient partnership until the leg-spinner struck again in the 11th over. This time Dhawan (33) was the victim of Mishra’s flight as his stumps got rattled.

Following his dismissal, there was a period of three overs when no boundaries were scored until Manish Pandey struck successive fours off Dan Christian to ease the pressure a bit. Williamson and Yusuf Pathan then saw through till the end.

SRH bowlers had struck when it mattered to stem an attacking stand between Prithvi Shaw (65) and Shreyas Iyer (44). Shaw, recently compared to Sachin Tendulkar by Mark Waugh, once again lived up to all the praise as he gauged the SRH bowlers’ line early and negated their sting.

The 18-year-old Shaw took a special liking for Siddarth Kaul, whom he hit for six and three straight fours in the sixth over, en route to scoring his second half-century in this IPL.

The duo looked to take DD towards a big total when Rashid Khan removed Shaw, who tried a slog sweep against the Afghanistan leg-spinner and was caught by Siddarth Kaul at third man.

DD captain Iyer looked set for a half-century, after getting a life when Saha dropped him off Rashid in the 13th over. However, Iyer fell six runs short of his fifth half-century when he was caught by Shikhar Dhawan at deep mid-wicket off Kaul.

With Shaw and Iyer gone, the onus was on Rishabh Pant (18) to take the score forward. But he too fell against Rashid after being trapped in front. It was only a late cameo by Vijay Shankar (23 not out) that took DD past the 150-mark.