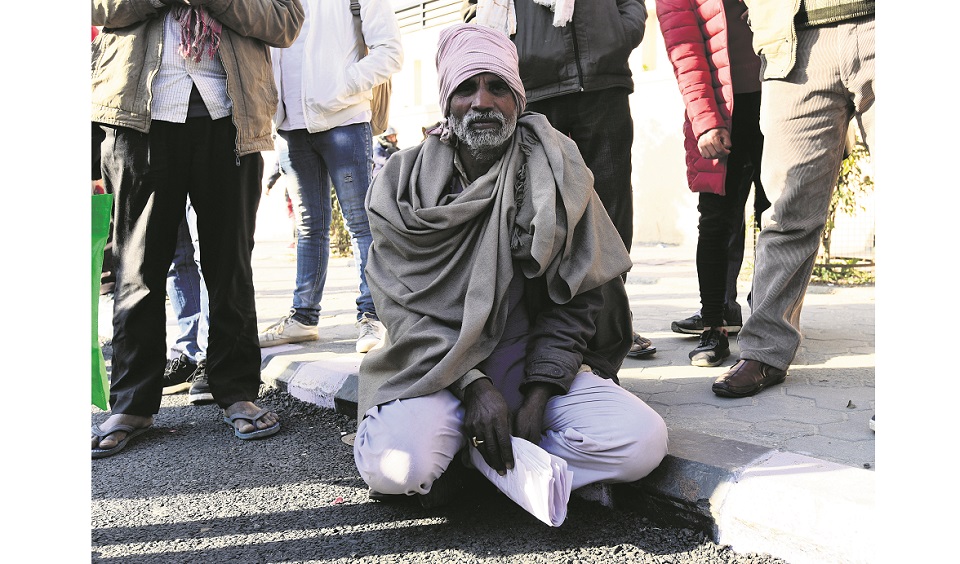 Sugarcane farmers from the tarai who have not been paid by various sugar mills for their crops, stage a demonstration at New Baneshwar on Monday demanding government intevention. Monika Malla/Republica

KATHMANDU, Dec 31: Sugarcane farmers, who have not been paid by the sugar mills for their crops, are staging a sit-in in the capital since the past four days. However, neither the government nor the sugar mills have done anything to address their grievance.

Sugarcane farmers said the mills are yet to clear outstanding payments for the past five years amounting to Rs 1.33 billion. According to them, it is mainly six sugar mills that have been refusing to clear their dues.

Ram Bilas Mahato, a farmer in his 70s, said he has not gotten full payment from Annapurna Sugar Mills since 2015/16. “I have bank loans worth millions and the bank has threatened to auction my property if I do not pay up,” he said.

Thirteen sugar mills are operating across the country. From time to time, the government has been directed the mills to pay the farmers on time, but to little effect. Although this year’s cane harvest season has already begun, the farmers have felt compelled to come all the way to the capital to pressure the government over their plight.

Hari Shyam Raya, secretary of the cane farmers’ action committee, said around 150 farmers are now in Kathmandu for their protest. According to him, Annapurna Sugar Mills has not paid the farmers for the past five years.

Raya said that last June the farmers staged a hunger strike in Sarlahi. “During multilateral talks in the presence of the chief district officer, the sugar mills agreed to clear their dues to farmers within one month,” he said. “But the mill owners have since been paying them peanuts and they stopped paying at all since the last two months.”

Raya said around 25,000 farmers are now left high and dry by the sugar mills. According to him, for the last two weeks they have been trying to get through to the mill owners including Rakesh Agrawal, director of Annapurna Sugar Mills, and Birendra Kanaudia, proprietor of Mahalaxmi Sugar Mills, but with no success. Last year, police arrested Agarwal from his residence at Tripureshwar, Kathmandu on the charge of not paying the sugarcane farmers.

Sugar mills for their part have long been blaming the import of cheaper sugar for their inability to pay the farmers on time. Sashi Kant Agrawal, president of the Sugar Producers Association, said that domestic sugar mills have piled up stocks of sugar as the market was flooded by imports from India and Pakistan two years ago. “Sugar mills have been unable to sell their stock and that has led to the delay in paying the farmers,” he said.

Cane farmers are on the war path but the government has not taken any firm measures to relieve their plight. Minister for Agriculture and Livestock Development Ghanashyam Bhusal said at a function on Monday they are trying to contact the sugar mills. “However, they have not come into contact,” he said.

KATHMANDU, Dec 2: Sugarcane farmers are yet to receive a due amount worth Rs 481 million from four sugar producers,... Read More...

Each province to have two medical colleges
48 minutes ago