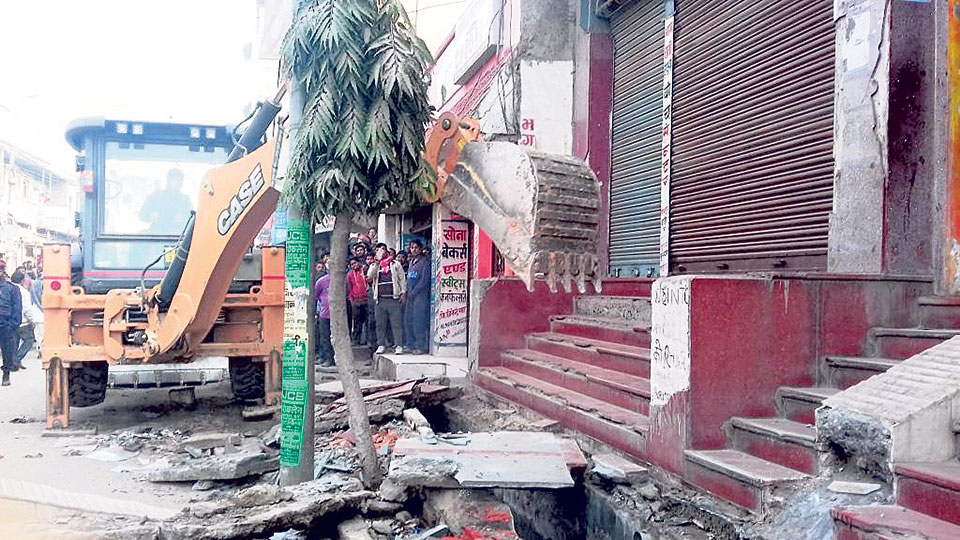 An excavator was used to clear the encroached pavements. According to the sub-metropolis, it was done for the purpose of keeping the city clean, which is also the district headquarters of Bara.

The beauty of Kalaiya Bazaar has deteriorated a lot after entrepreneurs rampantly used pavements to sell their goods. Some of them have even gone in length to construct structures in the pavements to support their shop.

“We had repeatedly appealed the entrepreneurs to free the pavements for the past two months. However, they refused to do so, which is why we were forced to use excavators,” he said.

For several years, entrepreneurs have been opening shops and constructing illegal structures in pavements of Kalaiya Bazaar. Such activities were left unchecked partially due to lack of local representatives. The newly elected chief Raya has vowed to get rid of such encroachments.

“The sub-metropolis chief is doing a praiseworthy job in clearing the encroached public areas,” said Umesh Das, chairman of the civil society. “Although the affected shopkeepers and entrepreneurs are resentful about it, this would serve the city well in the long term,” he claimed.

According to Chief District Officer (CDO) Bijaya Narayan Manandhar of Bara, clearing the encroached lands should have taken place a long time ago.