Study shows only 0.30 % of news stories in Nepali media have bylines of women journalists 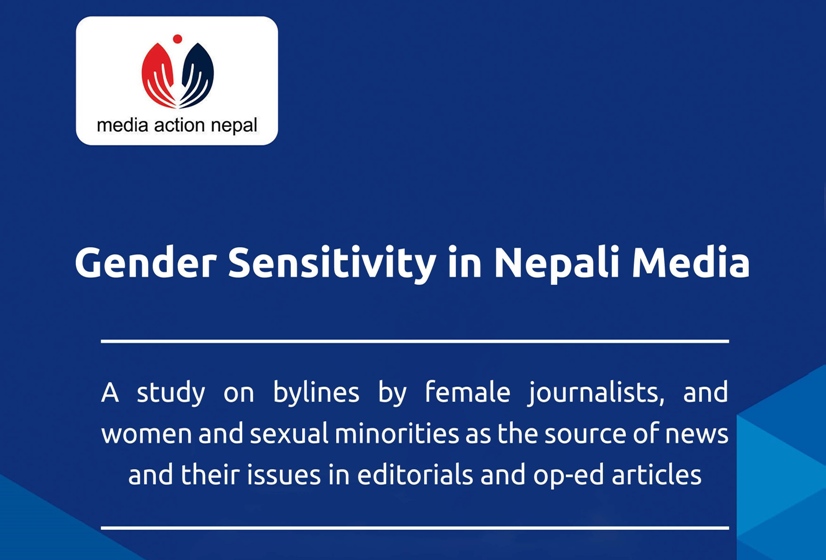 KATHMANDU, Jan 7: A study launched today by Media Action Nepal has concluded that Nepali media give less priority to issues of women and people with different sexual orientations. The research report titled 'Gender Sensitivity in Nepali Media' found that newspapers and online media in Nepal have not published gender issues as a matter of public importance.

Out of 21,919 news items published in 20 media outlets, only 76 had bylines of female journalists. This is only about 0.30 percent of the total news published by those media, the study revealed.

Kantipur daily published the highest number of news stories containing bylines of female journalists with a total of 18 during the study period. The others with bylines of female journalists are Butwal Today 15, Setopati online 13, Janakpur Today 10, Online Khabar 9, Gorkhapatra daily 7, Naya Patrika 3 and Sabalpost one. It is not possible for women journalists to have bylines without their presence in the newsroom. This study, however, shows that the media in Nepal are not serious enough about women's participation in the newsroom.

According to the study, out of the total number of media materials published in those media over the period of two months, only 388 or 1.67 percent news stories are about women and people belonging to different sexual orientations. Of those 388 about women and people with different sexual orientations, 386 are on women’s issues and only two about sexual minorities.

Underscoring that Nepali women are constantly facing gender discrimination and problems arising out of patriarchal power relations, Chairperson of Media Action Nepal Laxman Datt Pant urged media to highlight these issues and make the relevant stakeholders accountable. "Giving more space to women and people with different sexual orientations is more urgent than ever. There is a growing needs to make the media inclusive by ensuring gender equality through the implementation of the Gender Sensitive Indicators and the Code of Conduct for Journalists", Pant added.

Highlighting that free and responsible media is a key component of democratic societies and essential to the protection of human rights and fundamental freedoms, Mathew Loken, Counselor and Head, Political, Economic and Public Affairs at High Commission of Canada in Delhi remarked that it is critical that a free press reflects the diverse views of those within society, which includes the perspective of women and girls. "MAN’s approach of working closely with industry groups increases the likelihood that there can be immediate and tangible results for advancing women’s empowerment in the Nepali media," he added.

Aimed at measuring the level of gender sensitivity in media and determining how much and what kind of news content about women and people with different sexual orientations are published in Nepali media, the study assessed a total of 23,515 media contents published by a total of 20 media outlets–three national dailies and three online news portals operating in Kathmandu, and one national daily and one online news portal each from seven provinces, according to a press statement issued by the MAN.

The study analyzed news stories and other materials published by 14 media outlets (seven daily newspapers and seven online news portals) from the seven provinces during the period of two months from August 1 to September 30, 2021 and six media outlets (three daily newspapers and three online news portals from Kathmandu) from August 30 to November 1, 2021.

US dollar soars to all-time high
17 hours ago

Climate Finance and Accountability
21 hours ago