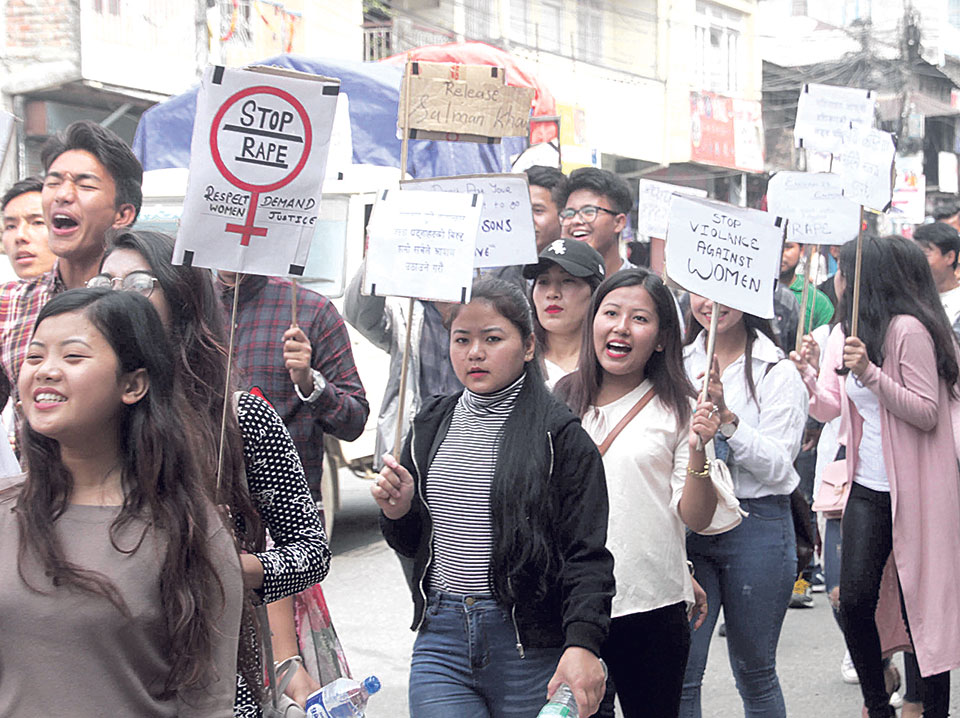 Students participating in the march against rape in Dharan. Photo: Republica

DHARAN, April 8: A large number of students from various colleges in Dharan organized a march against the rising cases of rape and violence against women.

The students stressed that men need to be more responsible towards the security of women who can be their daughters, sisters, wives or even mothers. They even demanded that rapists be hanged.

The march was organized by the students of the Central Campus of Technology (CCT), Hattisar of Dharan-14. Students of Birendra Memorial College (BMC) and Dharan Higher Secondary School (DHSS) also took part in the march.

The march started from CCT and went through various intersections of the city in order to raise awareness against violence against women. Manju Bhandari, deputy mayor of Dharan, along with many women activists joined the rally to express their solidarity with the victims.

Speaking at the end of the march, Deputy Mayor Bhandari said that it was disappointing that even police, as well as the family members and close relatives of the victims were involved in the crime of rape.
"It's good to see these young students running campaigns to raise their voice against an inhuman crime like rape. It is important that students across the country make similar efforts to uproot this problem," said Deputy Mayor Bhandari.

According to Saurav Sanjel, the chairperson of student union of CCT, it is very important for men to be positive towards change for the equal development of all human beings. Students also urged the parents to be supportive towards their daughters and help them cope with the physical and mental torture. Not just that, parents were told to encourage their daughters to speak up against the crime.

KATHMANDU, March 19: A total of 485,586 students from across the country are appearing in the Secondary Education Examination (SEE),... Read More...

Two arrested for raping and murdering a minor
8 hours ago