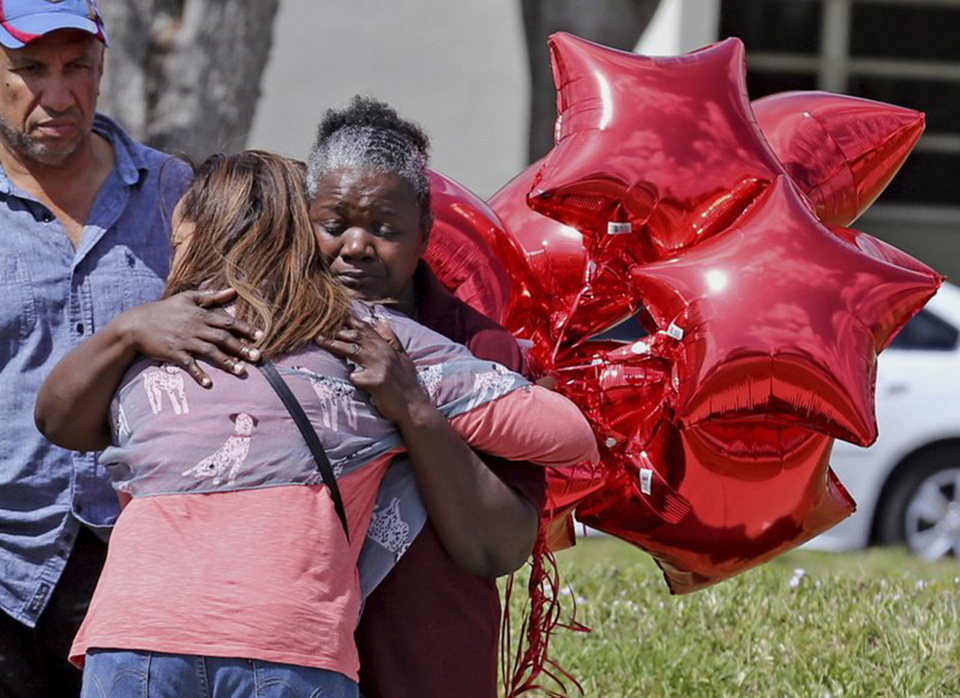 FLORIDA, Feb 24:  Florida officials have outlined their plans to make schools safer after a shooting that left 17 people dead last week, but some say they don't go far enough. Talia Rumsky is one of them.

Rumsky was among those who traveled to Tallahassee on Wednesday to lobby lawmakers about gun control. She said Gov. Rick Scott's plan to make it illegal for anyone under 21 to purchase a gun is a start, but shouldn't be the end of gun control efforts.

"This is a great first step, and we appreciate it," the sophomore said. "But it's not enough, and we're going to make sure they know it's not enough and is not solving our problems."

Scott announced plans Friday to put more armed guards in schools and to make it harder for young adults and some with mental illness to buy guns, responding to days of intense lobbying from survivors of the shooting at the Marjory Stoneman Douglas High School in Parkland nine days ago.  Scott unveiled his school safety proposals as teachers returned for the first time to the school.

While criticized by some as not going far enough, the measures are significant in a state that hasn't passed any type of gun control since Republicans took control of state government in 1999.

After days of funerals for those killed in the attack, teachers began the emotionally fraught process of returning to the school Friday to collect belongings from classrooms that have been off-limits since the slayings. Following an orientation Sunday for teachers and students, classes resume Wednesday.

Broward teachers union president Anna Fusco met with the teachers as they returned to campus Friday hailing them as "incredibly brave and strong."

"I met with one that was grazed with a bullet. ... She has a hole in her arm and a bruise from her shoulder to her elbow that looks like somebody whacked her with a bat and she's like, 'I'm here because we need to get things ready,'" Fusco said.

President Donald Trump said repeatedly Friday that he favored arming teachers to protect students, an idea many educators rejected out of hand.

"I am totally against arming teachers," Broward schools Superintendent Robert Runcie said. "They have a challenging job as it is."

Trump told reporters Friday that schools need some kind of "offensive" capability to deter and respond to attackers.

"If they're not gun-free, if there are guns inside, held by the right people, by highly trained professionals, you're going to see this end. It won't be happening again. Our schools are essentially gun-free zones and that makes them very dangerous places," the president said.

Scott, a Republican widely expected to run for the Senate, outlined his plan at a Tallahassee news conference. In addition to banning firearm sales to anyone under 21, the governor called for a trained law enforcement officer for every school — and one for every 1,000 students at larger schools — by the time the fall 2018 school year begins.

Stoneman Douglas, with more than 3,000 students, had one armed resource officer who never entered the building under attack while a gunman was shooting people inside, officials said.

That failure was compounded by confusion about what was being shown to police on school security cameras the day of the shooting and the lack of meaningful response to reports to the FBI and local police that 19-year-old suspect Nikolas Cruz might become violent, had guns and possibly would attack a school.

Florida's House speaker called it an "abject breakdown at all levels." Cruz is jailed on 17 counts of murder and has confessed to the shootings, investigators say.

A woman close to Cruz warned the FBI on Jan. 5 that he had rifles and said, "I know he is going to explode," according to a transcript of the tip to the FBI's call center, which was obtained Friday by The Associated Press. The FBI has acknowledged it failed to investigate the tip. The woman described Cruz's short temper and said he had the "mental capacity of a 12- to 14-year-old." She said Cruz posted pictures of weapons on social media and he wrote, "I want to kill people."

Among other things, the governor's $500 million plan would create a "violent threat restraining order" that would let a court prohibit a violent or mentally ill person from purchasing or possessing a firearm or any other weapon under certain circumstances.

The proposal would also strengthen gun purchase and possession restrictions for mentally ill people under the state's Baker Act, which allows someone to be involuntarily hospitalized for up to 72 hours. Scott is seeking $50 million for initiatives that include expanding mental health services by providing counseling, crisis management and other mental health services for youth and young adults.

"No one with mental issues should have access to a gun. It is common sense," Scott said.

The governor's plan made no mention of arming teachers on school grounds.

However, the Legislature's Republican leadership proposed letting teachers carry a gun if they have had law enforcement training. The legislators' plan also calls for a three-day waiting period for most gun purchases, with exceptions.

"Unfortunately, both plans omit a third, critically important piece of legislation Democrats have been and continue to push for: a ban on assault weapons and high-capacity magazines," said state Senate Democratic Leader Oscar Braynon. He added that recent mass shootings show that "so long as these high-powered weapons of war remain available for purchase these killings will continue."

On Friday evening, Marion P. Hammer, former president of the National Rifle Association and longtime Florida lobbyist, issued an appeal to gun enthusiasts titled, "EMERGENCY ALERT!  Don't Let Them Blame You For Parkland." She mentioned several proposals they could support, such as "hardening our schools," putting officers in schools and training volunteer teachers to use guns. But she said a three-day waiting period would not have stopped the Parkland shooter; bump stocks had nothing to do with it; and raising the age limit for gun purchases would be unfair.

BANEPA, Feb 20: Gyankunj Academy in Banepa has been vandalized by family members and relatives of a student who died mysteriously... Read More...

UML will stay neutral regarding the resignation of the Chief Justice: Oli
5 minutes ago

Two killed in separate accidents in Sunsari
59 minutes ago