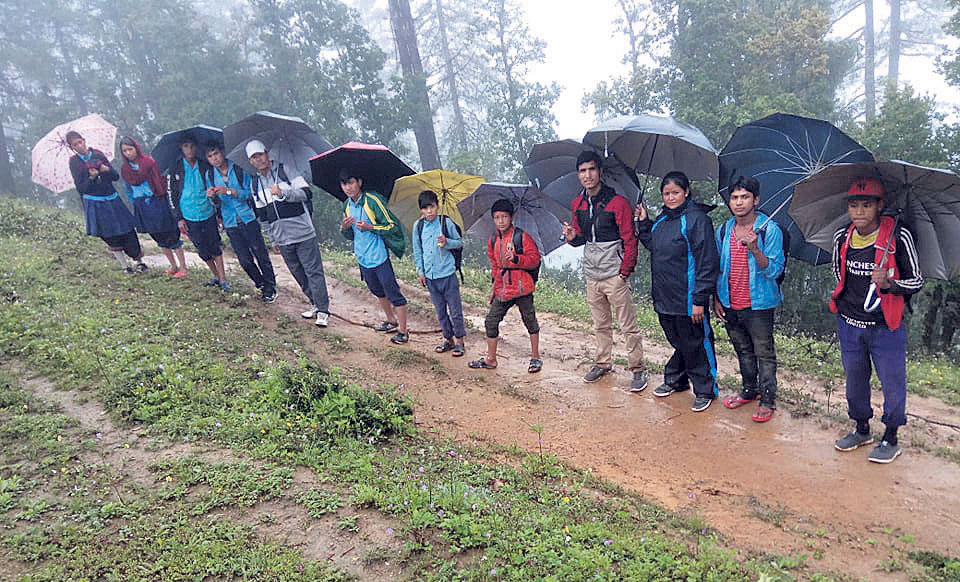 Students in a rural part of Jumla brave the rain to reach school in this recent photo. Photo: DB Budha/ Republica

JUMLA, July 13: It takes around two hours for Punnilal Rawat of Ripi village of Jumla to reach his school. The ninth grader said he gets exhausted by the time he reaches school.

“I usually walk very fast, but today my feet are aching,” he said last Tuesday.”I hardly get time to study or do homework,” he lamented.

Punnilal studies at Janajagriti Secondary School of Ghode, which is miles away from his home. He has no other option as there is no secondary school in his village.

Normally, it takes around two hours for him to reach school. But he does not feel that energetic everyday. The journey gets tougher during monsoon. His pace gets affected also during the cold winter and in the scorching summer heat. “I try to reach school on time, but sometimes I fail,” he said.

Dinesh Rawat who was accompanying him to the school also looked tired. The duo said they felt tired when they got back home the earlier day. They were yet to overcome the fatigue when they had to prepare to go school the next day. “Sometimes, it’s very hectic especially while returning home. It makes us extremely tired,” he Dinesh.

Generally, it takes more time for the students to get back home than to reach school, said Dinesh.

The students are energetic in the morning. But while returning back, due to long hours in school, all the energy gets drained out.

It is more problematic for girls due to menstruation. And walking for over four hours during in such fragile condition simply keeps them from going to school.

“We don’t go to school unless there is some urgency like exams,” said a girl from the same school requesting not to be named. “Girls don’t openly talk about menstruation, but they do not prefer to attend classes during their periods.”

The route from Ripi village to Ghode is not just too long to walk but also too risky. The steep terrain makes it very challenging for the students to make their journey. And there are dense forests on the way.

“But don’t have any option. Either we have to stop our education or we have to take the challenge,” Dinesh lamented.

Even though education has been enshrined in the constitution as the fundamental right of children, there are many rural areas in the country without any school. Let alone higher level schools, some villages lack even primary schools.

Jumla is considered backward in terms of facilities. Schools are no exception here. The situation has not changed much even after the local level government came into existence. For instance, the secondary school in Ghode is attended not just by the children of Ripi village but also by many other remote villages including Sudi, Dhipu and Ghodeshim.

“We have to get ready to go to school in the morning as soon as we open our eyes. We cannot afford to waste a second,” said Chandra Bahaddur Rawat of Sudi village, a 10th grader at the same school. “We don’t get time for anything else. Our homework often remains incomplete,” he added.

Chandra Bahadur thinks it would be better if his school had provided residential facilities. That would save time and energy of students and allowed them to concentrate on studies, he said. “We are spending so much time just to walk to school every day. It feels so tiring,” he remarked.

Meanwhile, chairperson of Tila Rural Municipality, Ratannath Yogi, said that the scenario is going to change soon. This village and some other municipalities have been making efforts to get higher secondary schools in every village, he said. “We have been talking about merger of schools and opening of new schools wherever necessary. The plights of young students will come to an end. We are very concerned about it,” he said.

Sija Multiple Campus: Students come for admission but not for studies

KATHMANDU, March 19: The students of Purna Hira Secondary School at Bansgadhi Municipality-8 in Bardia district have to endure up... Read More...