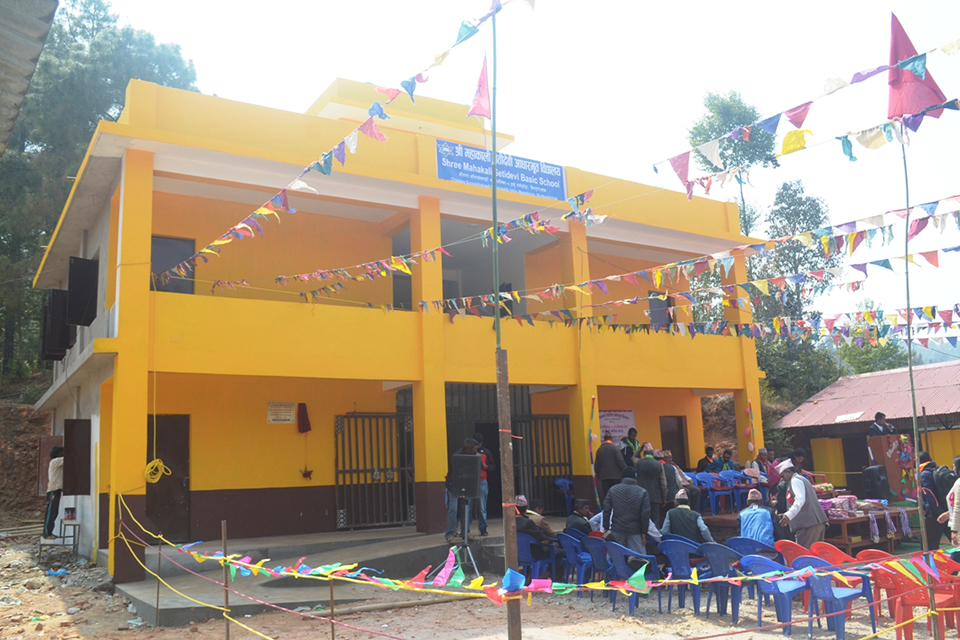 The new building of the school.

SINDHUPALCHOWK, Feb 28: The deadly earthquake of 2015 had compelled the students of Mahakali Setidevi Basic School of Sindhupalchowk to attend their class in tents for more than two years. Cold fog of winter, soaring heat of summer and incessant monsoon rains added to their miseries. However, a new earthquake-resilient building of the school has offered a huge respite for the students.

Long ago, the school was built with donations from parents. Unfortunately, it was reduced to rubble by the devastating earthquake. With the efforts of the District Education Office (DEO), the District Project Implementation Unit (DPIU) and other donors, a new school building has been built. "Now, we won't have to deal with any kind of problems regardless of the weather," said Anjali Tamang, one of the students of the school.

On the occasion of the 21st anniversary of the school, Aman Singh Tamang, the mayor of Chautara Sangachowkgadhi Municipality inaugurated the new school building. Janakraj Giri, the school principal, informed that the building was built at a cost of Rs 6.8 million. He further informed that DPIU had sanctioned a budget of Rs 6.2 million for the construction of the building. The remaining amount was collected through donations.

This school has become the first educational institution to be reconstructed from government funds after the earthquake.

SINDHUPALCHOWK, Mar 4: The deadly earthquake of 2015 had compelled the students of Mahakali Setidevi Basic School of Sindhupalchowk to attend... Read More...

Rolpa: Where students still walk over 2 hours to school

ROLPA, Feb 22: Bhumisara Gharti, a student from Rimsa village wakes up at five in the morning every day. Yet, because... Read More...