Students compelled to sit for exams before completion of course 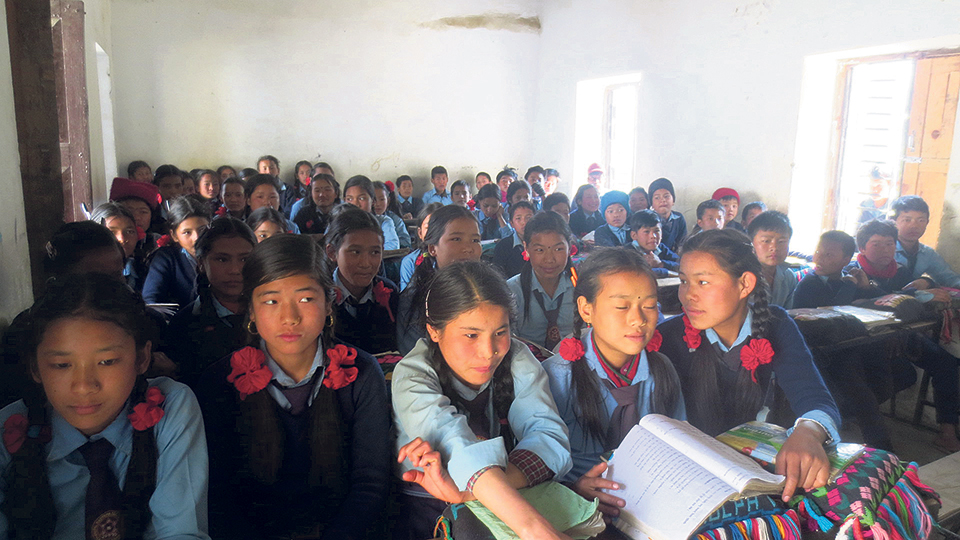 Students of Nepal Rastriya Secondary School in Fagam of Rolpa attending a class in this recent photo. Photo: Dinesh Subedi/Republica

ROLPA, March 5: Nepal Rastriya Secondary School in Fagam of Rolpa is a great hope for the bright future of children in the remote village. In lack of this school, many would not have got an opportunity to study as there are not many schools in Rolpa. However, given the current situation of the school, guardians and students can be least optimistic. Students sitting for the upcoming Secondary Education Examination (SEE) in the school state that they have not turned beyond 24 pages of their English book. Similarly, courses of Mathematics and Social Science have not been well taught. Ninth graders in the school have nothing different to report. They are also finding it hard to grab the lessons taught by the teachers.

According to the school principal Dhan Bahadur Pun, there is no teaching and learning environment in the village. This year alone, 20 students left the school. He stated that finding teachers is the greatest challenge for him. "We don't have enough number of teachers. This, of course, affects the course, "he said.

Hemant Pun, chairperson of the school management committee, states that the school cannot hire enough number of qualified teachers with its internal resources. The committee had discussed it with parents. However, they were not eager to support the school.

"We were hopeful that the parents would be supportive. But nobody cares. The lack of awareness is the main problem. Parents should have been a little more concerned," he said. Pun added that the government's teacher quota is not enough and the school does not have a proper building or infrastructures either.

There are many schools in Rolpa which suffer the same fate. Scattered houses and schools are far away. This has deprived children of education. And even when there is enough number of students in school, lack of teachers affects studies.

According to Kul Raj Acharya, official at the education department of Rudraghanti Rural Municipality of southern Rolpa, there is indeed too little number of teachers than needed in most of the schools in Rolpa. And this problem is yet to be addressed. However, even those who are regularly getting government salary for teaching at schools are not serious, he noted.

"They work for the sake of salary. They are hardly serious about their duty," he charged. "At some places, they provide extra tuition classes before SEE exams. That way, they can earn good money," he added.

Education was one of the major agenda of candidates during the last elections. However, even after the local bodies coming into existence, the people of Rolpa have not experienced remarkable changes in this sector.

Children are forced to sit for exams before completion of courses, as the courses are not properly taught by teachers. According to chairperson of Thabang Rural Municipality Bir Bahadur Gharti, the local bodies are making efforts to bring things on track.

"The problem of timely completion of course is true for some subjects, but not for all subjects. But we need to get the exact details. We have been making efforts to provide better education," he said.

KATHMANDU, March 19: Faced with the risks of a possible COVID-19 outbreak, the government on Wednesday decided to postpone the... Read More...

BHAKTAPURr, Nov 29: The National Examination Board is set to conduct this year's Secondary Education Examination (SEE) from Chaitra 10... Read More...

Renu Dahal leading by more than 5,000 votes in Bharatpur metropolis
27 minutes ago