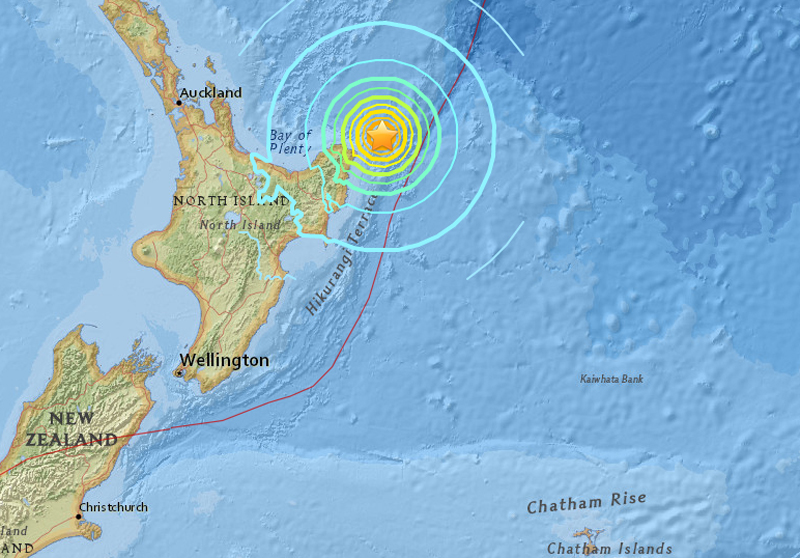 WELLINGTON, Sept 2: A strong magnitude-7.1 earthquake rattled the coast ofNew Zealand's North Island on Friday morning, triggering a small tsunami and shaking items from shelves but not causing any major damage or injuries.

The quake struck just over 160 kilometers (100 miles) northeast of the city of Gisborne at a depth of 19 kilometers (12 miles), according to the United States Geological Survey. It was widely felt throughout the North Island and was followed by a series of aftershocks.

Bill Martin, the owner of a holiday park in Te Araroa, a remote coastal community that was among those most affected by the quake, told The Associated Press he was woken by the jolt a little before 5 a.m.

"It was very violent," he said. "It lasted maybe about 10 seconds but it seemed like an eternity."

Martin said the quake sent some of his household ornaments crashing from their shelves and knocked over bottles.

"I watched the pantry do the rock and roll," he said. "There were at least four aftershocks that were reasonably strong as well."

He said many residents drove up to into the hills after emergency management authorities issued a tsunami warning. That warning was later canceled. Authorities reported detecting tsunami waves of about 30 centimeters (1 foot).

Martin said the quakes caused plenty of turbulence in the ocean, but not any large waves. The Pacific Tsunami Warning Center in Hawaii did not issue any wider tsunami warnings for the region.

The quake came a day after a magnitude-5.7 quake registered in the same area, 100 kilometers (62 miles) northeast of Te Araroa.

New Zealand sits on the Pacific "Ring of Fire," an arc of seismic faults around the Pacific Ocean where earthquakes are common. A 2011 earthquake in the city of Christchurch killed 185 people and caused extensive damage.

25 youths felicitated for their inspiring achievements
19 hours ago

Is it safe to ride public transit during the pandemic?
17 hours ago

Institutional childbirth reduced by more than half during lockdown in Nepal: Study
26 minutes ago