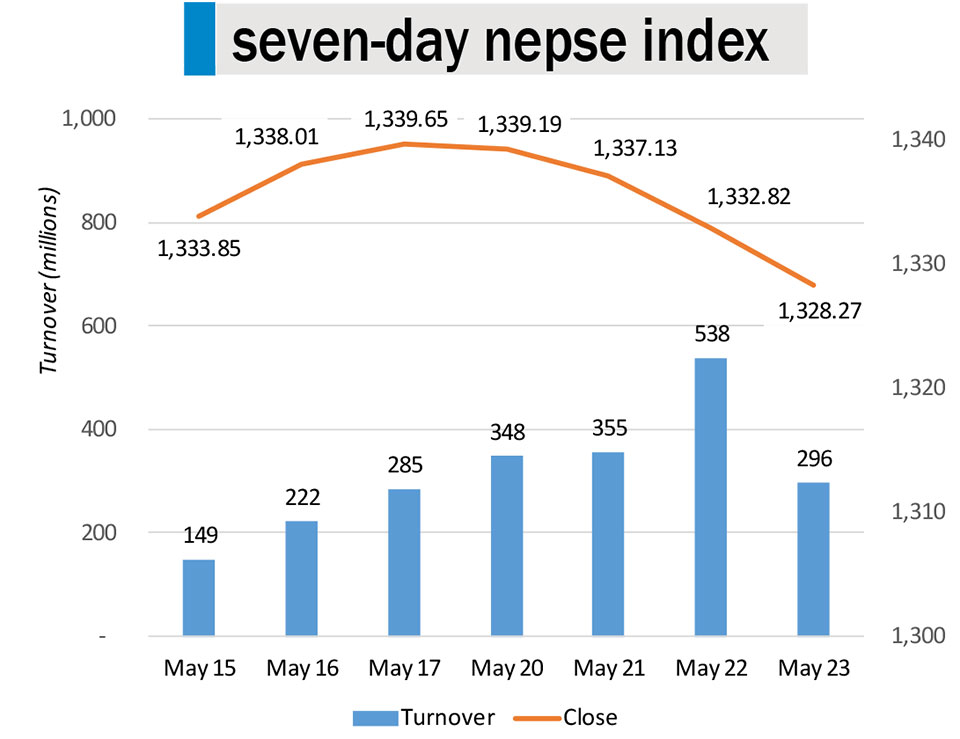 The stock market witnessed losses for a fourth consecutive session as no major news or events, including the government's announcement of annual plan, has been able to boost the sentiment of investors. Consequently, the daily turnover fell to Rs 296 million.

All major sub-indices suffered loss on the day, except Microfinance and Others sub-Indices both of which closed 0.31 percent higher. Manufacturing & Processing Sub-Index was the biggest loser among sectoral indices, shedding 0.63 percent. Banking Sub-index slipped 0.54 percent. Finance and Development Bank sectors followed suit.

Its price was down by almost 10 percent at the close. Similarly, shares of United Insurance Company Ltd dropped over 4 percent. The company is holding its annual general meeting on June 10. But it has not presented its previously proposed 240 percent fights issue in the agenda for the meeting.

The allotment of initial public offering (IPO) of Rairang Hydropower Company Ltd was concluded on Wednesday. A total of 76,440 applicants form general public were allotted 10 shares each.

The technical model of ARKS indicates bearish candlestick formation for the fourth consecutive day with the index closing below 1,330-point level. The index has diverted further downward from its resistance zone of 1340-1350 points. The immediate support for the index lies at psychological 1,300-point mark.

The Relative Strength Index (RSI) is slightly tilted toward the oversold zone, reflecting the weakness seen in the market recently. Moving Average Convergence/Divergence (MACD) is approaching the neutral line, the cross of which might suggest a sustained downtrend. In the current juncture, investors are advised to trade cautiously. Further, the index movement around the psychological support of 1,300 points should be monitored for potential buying opportunity.

KATHMANDU, Sep 24: Instead of working as watchdogs over the government, the parliamentary committees have become loyal to it and favor... Read More...