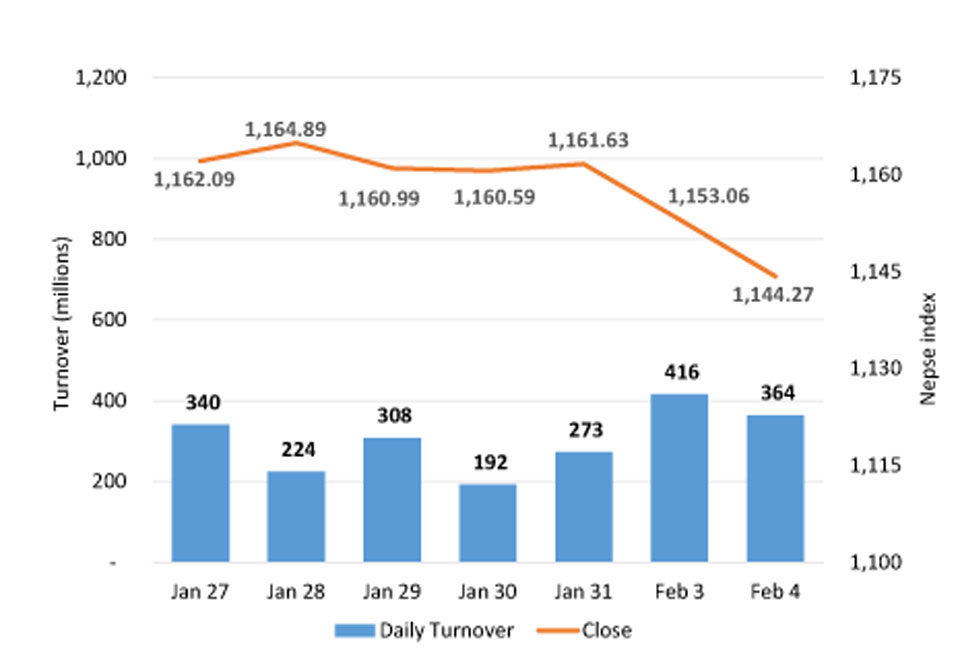 KATHMANDU: After losing more than 8 points in the previous session, Nepal Stock Exchange (Nepse) index traded slightly higher for most of the initial trading hour. Nonetheless, stocks returned to its losing ways and struggled in the latter trading hours. The benchmark index shed 8.85 points to close at 1,144.27 points on Monday.

With Monday's loss, the index has hit the lowest since the beginning of 2019. Sellers remain fairly dominant in the current scenario due to lack of any major news in the financial space. Meanwhile, high interest rates still persists as a major concern for the equity market keeping investors from taking substantial long positions. Total turnover remained sub-par as only Rs 364 million worth of shares changed hands on the day.

In terms of market activity, shares of Nepal Bank Ltd were traded the most as the commercial bank posted a turnover of over Rs 27 million. Next on the list was Upper Tamakoshi Hydropower Ltd with Rs 23 million worth of shares traded. Shares of Prabhu Bank Ltd Promoter Share, Citizen Investment Trust and NIC Asia Bank Ltd were also traded actively as reflected in their turnovers of Rs 21 million, Rs 19 million and Rs 12 million, respectively.

Among other companies publishing earnings for the second quarter, Grameen Bikas Laghubitta Sanstha Ltd reported a moderate 15 percent growth in its net profit. Meanwhile, National Hydropower Company Ltd reported a net profit of over Rs 14 million against a loss of Rs 9.72 million in the corresponding quarter of the previous year.

KATHMANDU, July 23 : Though some early selling pressure was visible, the stock market recouped its initial losses to trade in... Read More...

Stocks begin 2020 on a positive footing

KATHMANDU Jan 2: Stocks remained little changed on the first trading day of 2020. After trading essentially flat in the... Read More...