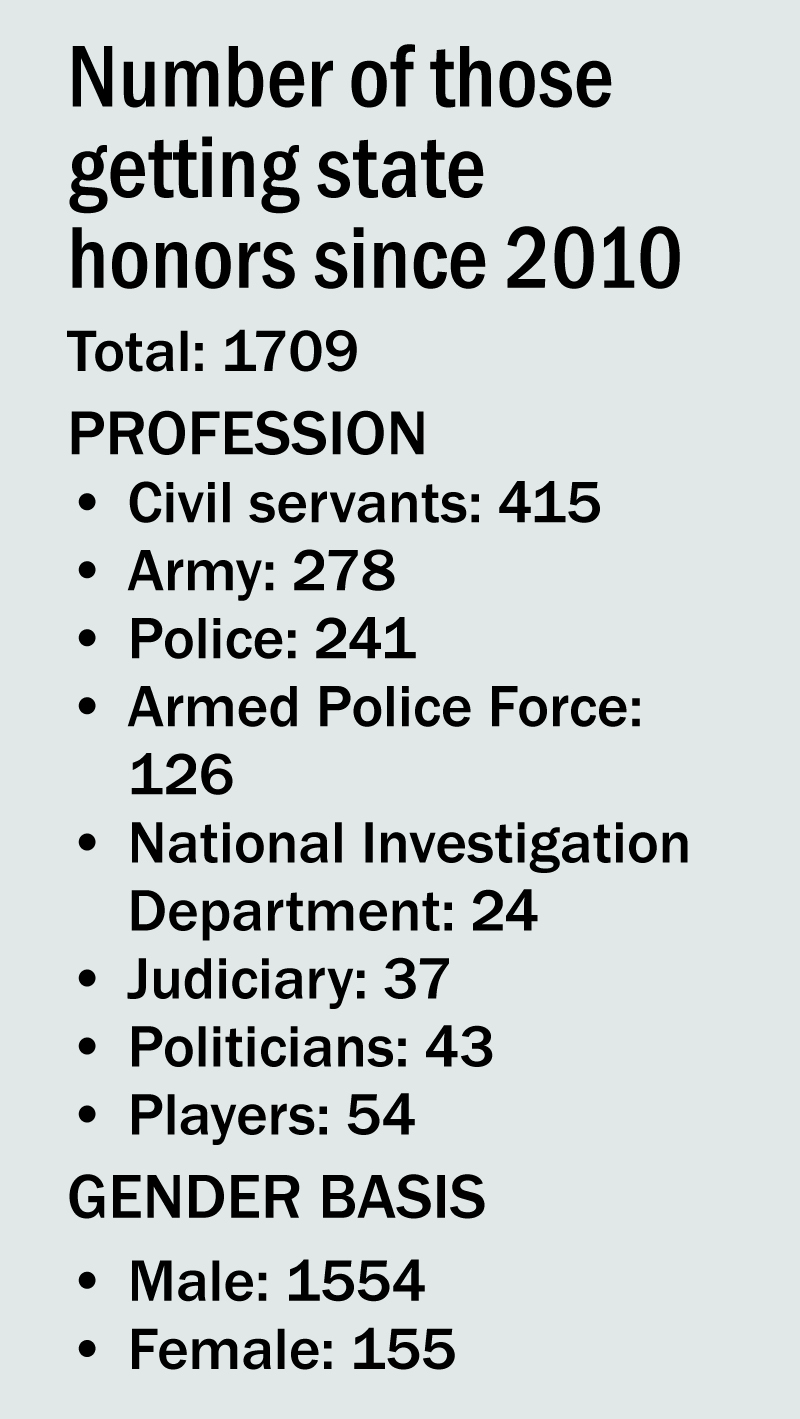 Koirala was familiar with the Indian tradition of mentioning the  state honors before a person's name.

If the same  tradition is followed in Nepal, the name of the chief secretary of the government should  read  Suprabal, Jansewa Shree, Sukirtimaya Rastradwip, Prasiddha Prawal Janasewa Shree Som Lal Subedi.

According to the Bibhusan (state honors) Act 2064 BS, state honors  recognize those making a distinguished contribution in various fields. If the state honors received by Subedi are seen against the criteria set  for this purpose, it is hard to find anyone else who has made a similar contribution to  the nation.

Sitting at the helm of the bureaucrat, Subedi has already done a hat-trick in terms of state honors over the past seven years.

Currently serving as Home Secretary, Regmi receives a medal no matter which office he serves in. He has never missed  an award since 2013, except in  2015 when the government decided not to organize an awards ceremony.

Going by a Supreme Court ruling, Regmi as Home Secretary is not even eligible to receive any medal or state honor. Responding to a write petition filed against the awarding of the Sukirtimaya Rastradip to then home secretary Gobinda Kusum seven years ago, the apex court had questioned the impartiality  of state honors. The sitting Home Secretary acts as member-secretary of the awards Recommendation Committee.

However, the apex court's ruling did not prevent  Recommendation Committee secretary Regmi from including his own name among the honors recepients. President Bidya Bhandari endorsed the recommendations and conferred the award on him 'for making a significant contribution to  national life'.

Interestingly, Regmi  not only recommended his own name for  state honors but also his father Laxmi Kant Regmi for the prestigious Suprabal Janasewa Shree.

Another lucky individual is Joint Secretary Yadav Koirala, who  heads the Home Ministry's section that oversees the distribution of awards and state honors. In the past three years, Koirala has received two top state honors, the Suprabal Janasewa Shree third as Chief District Officer of Kaski three years ago, and the Sukirtimaya Rastradip this year.

In the security agencies. the state has been conferring honors even on those implicated in corruption and those facing action for incompetence while discharging their duties.

Former home secretary Khem Raj Regmi argues that there is unfair competition among government employees  for state honors as these are taken into account in promotions.

Although the provision of awarding additional points for promotions on the basis of medals received has been removed lately, the unhealthy competition continues because of the prestige attached.

Regmi argued that civil servants and other government employees do not receive awards on the basis of performance but due to access to senior bureaucrats,  nepotism and favoritism. The  competition among police officials is particularly evident as police personnel receiving medals still get additional points for promotions.

The Home Ministry  spends roughly Rs 50 million each year to prepare the medals. As the number of those receiving medals is increasing each year, this expense  is also in increasing.

Home Ministry Spokesperson Dipak Kafle said they have begun doing homework to make the honors more objective and transparent. "Of course, there is room for improvement," said Kafle.