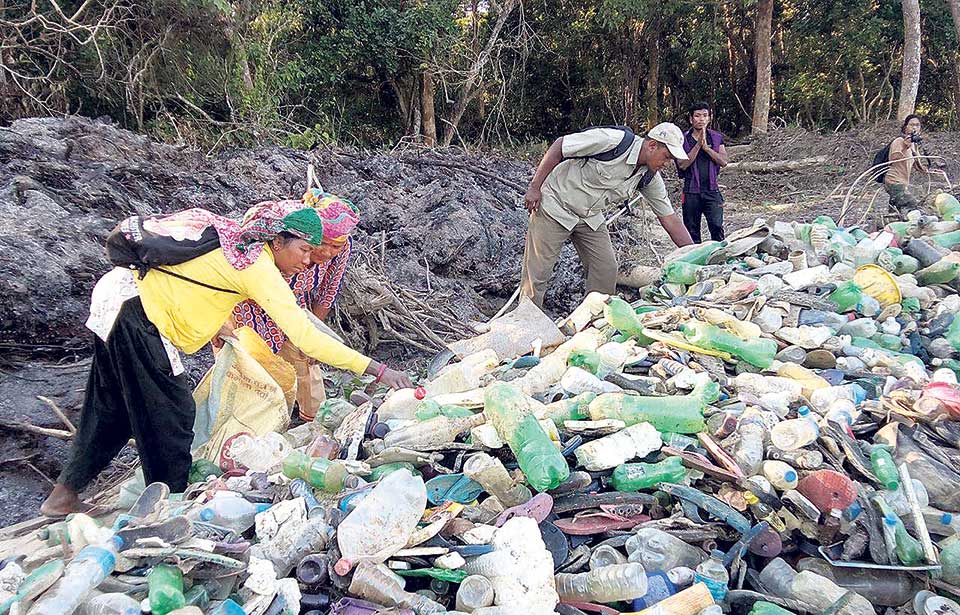 CHITWAN, Nov 5: Massive flooding this monsoon has polluted Chitwan National Park (CNP) by dumping piles of garbage. Plastic bags, bottles, slippers, shoes, clothes and even utensils are dumped within the park’s forest and water resources near the eastern side of Sauraha.

Since the area is home to wild animals like rhino and elephants and many aquatic animals, the garbage is posing risk to their health. Chitwan was hit by floods in the last week of August and the floods had deposited a lost of garbage in several locations.
Though late, stakeholders have recently taken initiatives to clean it up.

“We have been collecting five tractors of garbage in a day to clean up the park area,” said Jitu Lama, coordinator of Environment and Wildlife Conservation Sub Committee of the Regional Hotel Association Chitwan, Sauraha. “25 people including local residents have been delegated with the task.

If swallowed, the garbage can choke wild animals and therefore we trying to remove it as soon as possible.” he said. The cleaning campaign is part of the sub committee’s 10 day cleanliness drive that started on Friday.

According to Lama, apart from the 25-member task force, staffs from the national park as well as some army personal have been also helping in cleaning the debris. And recently several local organizations have also extended their support to the campaign, Lama said while expressing hopes that the ongoing efforts would help the national park to get rid of the garbage very soon.

“The task force is being assisted by around a dozen local organizations, Nepal Army personals, and the park’s own administrative and other staffs. Considering the speed that the campaign has been moving ahead, we look forward to clean it all within the next 10 days.” Lama stated.

Bear bottles, cans, plastics bottles and polythene dumped within the national park has made it hazardous for the park’s inhabitants along with making it an ugly site for the visitors who throng the national park daily.

“It took many days for the national park authorities to bring things to normalcy after the deadly floods in August. While we were busy with restoring things around the park, we fell short of resources to clean up the garbage dumped within the park’s perimeter. Because of this some areas within the park have become very much polluted to visit,” he elaborated. “However, now with active support from the locals and the local business community, we are getting rid of all that garbage.”

One of the early victims of the garbage and the dirty water were the Arna (wild buffalo). The national park administration had admitted that the dirty water and filth caused by the flood was taking toll on Arna’s health.  Upon inquiring the causes because of which the buffaloes were falling sick, it was revealed that those buffaloes were seen grazing in the flooded areas.

Even though Lama expects that the 10 day drive would bring changes, he is sometimes a bit skeptic of this. Garbage has covered huge area of national park.

“The garbage is spread so badly. Wherever you see, your eyes will spot some garbage there. Sometimes I feel that some dumping site was fully washed away by the floods and was dumped here in its entirety,” Lama said. “It is very challenging to clean it up. Sometimes I wonder whether we would do it in ten days. But I hope, with everyone working hard, this is possible,” he added.

Rapti and Dhungre, two rivers flow across Sauraha which itself is at the foothills of steep Chure forest. Ramchandra Kandel, chief conservation officer at the national park claims that the garbage in the area was also dumped from the Chure forest as well.

He stated that the issue of garbage was not only posing health risk to the locals in the buffer zone and the national park, but has been also seriously jeopardizing the beauty and glory of Sauraha. “We would have cleaned it up long ago but it was not possible to walk through the park and collect the soaked garbage. We had to wait for the flood to drain completely and the land to get dry,” he said.

Kandel claimed that garbage is not dumped across the whole national park the way it is dumped in areas near Sauraha. He said there are only certain locations that require human efforts to clean it up. “We are very much grateful to the residents and the business community for taking part in the cleanliness campaign.

Their spirit, efforts and dedication reflect that they consider the park as their own home and love it as much,” he noted. The park is a UNESCO World Heritage Site.

KATHMANDU, May 10: The International Centre for Integrated Mountain Development (ICIMOD) and NMB Bank, Nepal signed a Memorandum of Understanding to... Read More...

Child goes missing in a drain in Kathmandu. Who is responsible?
9 hours ago
'No changes made in the tax imposed on sanitary pads in new budget'
22 hours ago