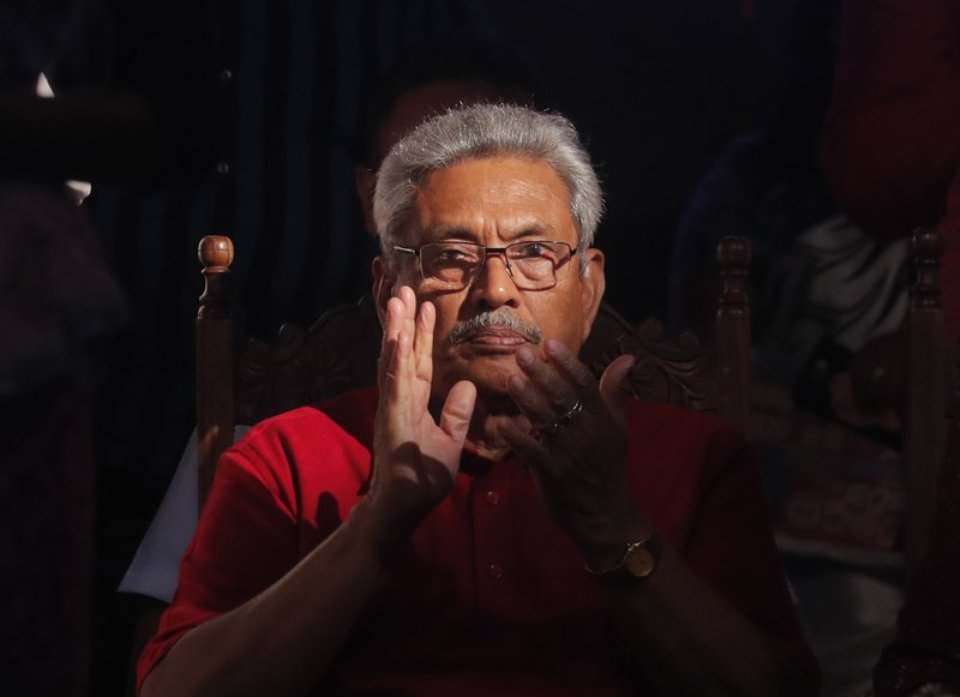 - In this Nov. 13, 2019, file photo, Sri Lanka's former defense secretary and presidential candidate Gotabaya Rajapaksa attends a rally in Homagama, on the outskirts of Colombo, Sri Lanka. Rajapaksa is credited with helping end the country’s long civil war and is revered as a hero by the Sinhalese Buddhist majority. He comfortably won Saturday’s presidential election with about 52% of the ballots. But minorities largely voted for his opponent, fearing Rajapaksa because of allegations of wartime human rights violations against him. (AP Photo/Eranga Jayawardena, File)

COLOMBO, Sri Lanka, Nov 19 : Sri Lanka’s newly elected president, Gotabaya Rajapaksa, may struggle to consolidate his victory. With many executive powers clipped and the opposition in control of a powerful Parliament, the former defense official who inspires respect but also fear may have difficulty assembling a government.

Rajapaksa, who is credited with helping end the country’s long civil war, comfortably won Saturday’s presidential election with about 52% of the ballots. But minorities largely voted for his opponent, fearing his return to power because of allegations of wartime human rights violations against him.

When Rajapaksa was sworn in as Sri Lanka’s seventh president on Monday, he said he would form his own government.

“I am the executive president of this country. I will not hesitate to use my executive power for the benefit of the country,” Rajapaksa said. “I will form a new government that can implement my policies.”

But that depends on whether Prime Minister Ranil Wickremesinghe loses a no-confidence vote or resigns, allowing Parliament to choose a new prime minister.

Rajapaksa faces legal barriers in appointing a government because of a 2015 constitutional amendment that curtails the powers of the presidency that followed an unsuccessful bid for reelection by his brother, ex-President Mahinda Rajapaksa.

The president can appoint or fire ministers only on the advice of the prime minister — whom the president has no power to remove — and can’t hold any ministry portfolios.

Rajapaksa can legally dissolve Parliament only next March, six months before its term ends.

Wickremesinghe’s party is in discussions on its future course and says it recognizes the mandate Rajapaksa received, but that it has not yet decided whether to clear the way.

“The mandate is so overwhelming that it is difficult for the Ranil Wickremesinghe government to survive anymore,” said analyst and independent journalist Kusal Perera. Several Cabinet ministers have already resigned after the governing party’s defeat.

The parliamentary speaker’s office said in a statement that party leaders and lawmakers are discussing different options including a voluntary dissolution of Parliament with the support of two-thirds of its members or allowing Rajapaksa to appoint a caretaker government to function until March.

Rajapaksa will also need a national budget for 2020 by April with the current government having only approved an interim budget for the first three months of the year because of the impending election.

He is inheriting an economy wounded by last April’s Easter Sunday bomb attacks that killed 269 people. The suicide bombings blamed on local Muslim groups were carried out at three churches and three tourist hotels.

Tourists fled the country soon after the attacks, hurting hotels and tourism-dependent businesses.

The economy is expected to grow about 3% this year, according to the central bank, way below the 6%-plus average of recent years and possibly the lowest level in nearly 20 years.

It also falls on Rajapaksa to handle any international repercussions if he goes ahead with a campaign promise to withdraw from a United Nations Human Rights Council resolution to investigate alleged wartime abuses during the 26 years of armed conflict between separatist Tamil Tiger rebels from the island nation’s Tamil community and government forces.

As his brother’s defense chief, Rajapaksa oversaw a decisive but brutal monthslong siege of the Tamil Tigers at the war’s end.

Both government forces and Tamil rebels were accused of serious human rights violations. A U.N. report said some 40,000 Tamil civilians may have died in the final months of the fighting in 2009.

Rajapaksa himself is accused of overseeing abduction squads, rape and extrajudicial executions.

Last Saturday’s presidential election showed continued ethnic divisions and minority fears, with Tamils and Muslims voting overwhelmingly against Rajapaksa, who during the campaign appealed largely to majority Sinhala Buddhists deeply shaken by the Easter attacks that broke a decade of peace.

Rajapaksa called on minority groups to rally around him in his inaugural speech, but winning their confidence will be far from easy.