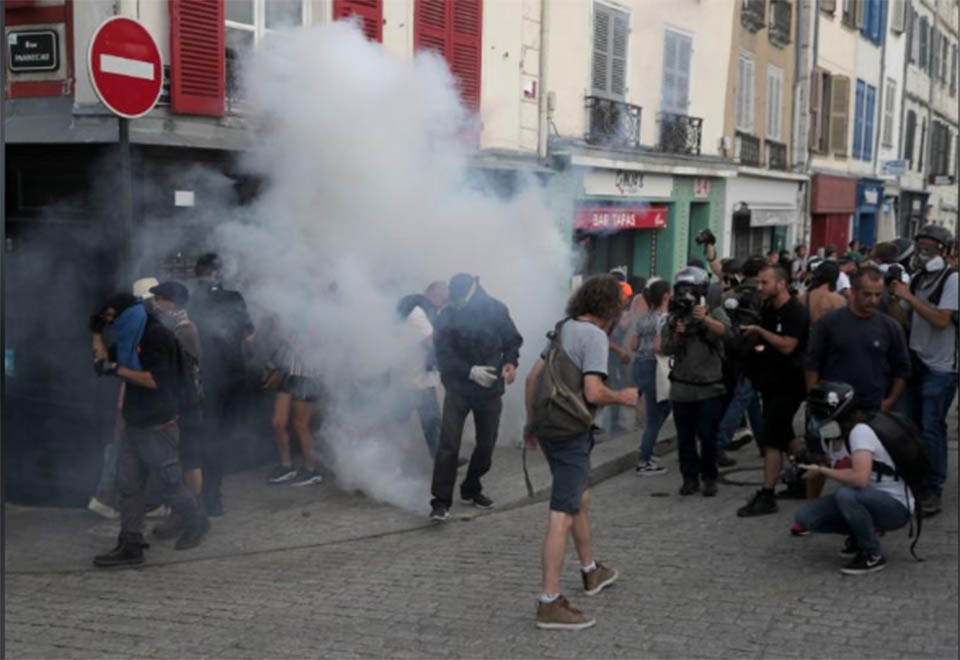 BIARRITZ, Aug 25: Squabbles erupted among G7 nations on Saturday as their leaders gathered for an annual summit, exposing sharp differences on global trade tensions, Britain’s exit from the EU and how to respond to the fires raging in the Amazon rainforest.

French President Emmanuel Macron, the summit host, planned the three-day meeting in the Atlantic seaside resort of Biarritz as a chance to unite a group of wealthy countries that has struggled in recent years to speak with one voice.

Macron set an agenda for the group - France, Britain, Canada, Germany, Italy, Japan and the United States - that included the defense of democracy, gender equality, education and the environment. He invited Asian, African and Latin American leaders to join them for a global push on these issues.

However, in a bleak assessment of relations between once-close allies, European Council President Donald Tusk said it was getting “increasingly” hard to find common ground.

“This is another G7 summit which will be a difficult test of unity and solidarity of the free world and its leaders,” he told reporters ahead of the meeting. “This may be the last moment to restore our political community.”

U.S. President Donald Trump had brought last year’s G7 summit to an acrimonious end, walking out early from the gathering in Canada and rejecting the final communique.

Trump arrived in France a day after responding to a new round of Chinese tariffs by announcing that Washington would impose an additional 5% duty on some $550 billion worth of Chinese imports, the latest escalation of the tit-for-tat trade war by the world’s two largest economies.

“So far so good,” Trump told reporters as he sat on a seafront terrace with Macron, saying the two leaders had a special relationship. “We’ll accomplish a lot this weekend.”

Macron listed foreign policy issues the two would address, including Libya, Syria and North Korea, and said they shared the objective of preventing Iran from obtaining nuclear weapons.

Trump later wrote on Twitter that lunch with Macron was the best meeting the pair has yet had, and that a meeting with world leaders on Saturday evening also “went very well.”

However, the initial smiles could not disguise the opposing approaches of Trump and Macron to many problems, including the knotty questions of protectionism and tax.

Before his arrival, Trump repeated a threat to tax French wines in retaliation for a new French levy on digital services, which he says unfairly targets U.S. companies.

Two U.S. officials said the Trump delegation was also irked that Macron had skewed the focus of the G7 meeting to “niche issues” at the expense of the global economy, which many leaders worry is slowing sharply and at risk of slipping into recession.

The leaders themselves were gathering behind tight security in a waterfront conference venue, the surrounding streets barricaded by police.

SPAT OVER ‘MR NO DEAL’ BREXIT

Macron opened the summit with a dinner at the base of a clifftop lighthouse overlooking Biarritz, where a menu of piperade, a Basque vegetable specialty, tuna and French cheeses awaited the leaders.

Adding to the unpredictable dynamic between the G7 leaders are the new realities facing Brexit-bound Britain: dwindling influence in Europe and growing dependency on the United States.

Johnson and Tusk sparred before the summit over who would be to blame if Britain leaves the EU on Oct. 31 without a withdrawal agreement.

Tusk told reporters he was open to ideas from Johnson on how to avoid a no-deal Brexit when the two men meet.

“I still hope that PM Johnson will not like to go down in history as Mr No Deal,” said Tusk, who as council president leads the political direction of the 28-nation European Union.

Johnson, who has said since he took office last month that he will take Britain out of the bloc on Oct. 31 regardless of whether a deal can be reached, later retorted that it would be Tusk himself who would carry the mantle if Britain could not secure a new withdrawal agreement.

“I would say to our friends in the EU if they don’t want a no-deal Brexit then we’ve got to get rid of the backstop from the treaty,” Johnson told reporters, referring to the Irish border protocol that would keep the border between Northern Ireland and EU member Ireland open after Brexit.

“If Donald Tusk doesn’t want to go down as Mr No Deal then I hope that point will be borne in mind by him, too,” Johnson said on his flight to France.

Johnson is trying to persuade EU leaders to drop the backstop from a withdrawal agreement that was negotiated by his predecessor but rejected three times by the British Parliament as the United Kingdom struggles to fulfill a 2016 referendum vote to leave the bloc.

‘NOT THE WAY TO PROCEED’

Despite the Brexit tensions, diplomats played down the likelihood of Trump and Johnson joining hands against the rest, citing Britain’s foreign policy alignment with Europe on issues from Iran and trade to climate change.

Indeed, Johnson said he would tell Trump to pull back from a trade war that is already destabilizing economic growth around the world.

“This is not the way to proceed,” he said. “Apart from everything else, those who support the tariffs are at risk of incurring the blame for the downturn in the global economy, irrespective of whether or not that is true.”

Anti-summit protests have become common, and on Saturday thousands of anti-globalization activists, Basque separatists and “yellow vest” protesters marched peacefully across France’s border with Spain to demand action from the leaders.

“It’s more money for the rich and nothing for the poor,” said Alain Missana, an electrician wearing a yellow vest - symbol of anti-government protests that have rattled France for months.

Even so, Britain and Germany were at odds with Macron’s decision to pressure Brazil by blocking a trade deal between the EU and the Mercosur group of Brazil, Argentina, Uruguay and Paraguay.

A spokesman for German Chancellor Angela Merkel said not concluding the trade deal was “not the appropriate answer to what is happening in Brazil now.”

The UK’s Johnson appeared to disagree with Macron on how to respond. “There are all sorts of people who will take any excuse at all to interfere with trade and to frustrate trade deals and I don’t want to see that,” he said.

The UK will eliminate import tariffs on a wide range of goods and keep the border between Ireland and Northern... Read More...