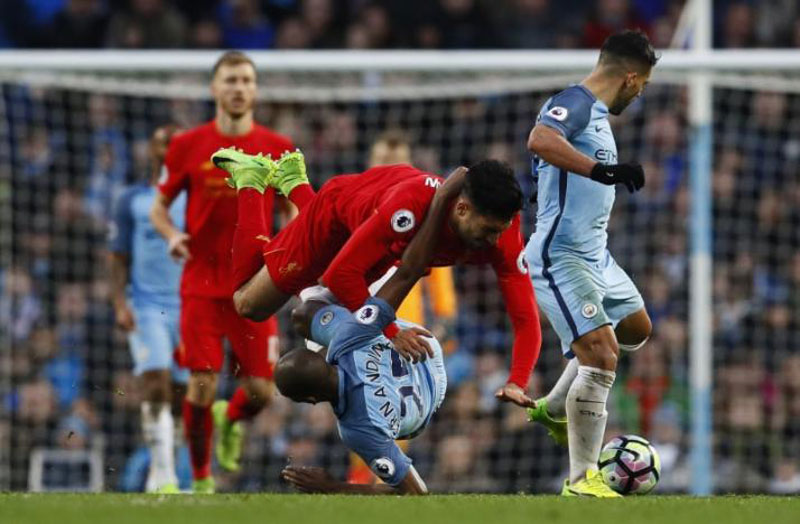 Tottenham Hotspur kept Chelsea just about within their sights at the top of the Premier League on Sunday by beating Southampton 2-1 and Manchester United improved their prospects by moving into fifth place with a 3-1 victory at Middlesbrough.

Both clubs would then have been happy enough to watch Manchester City and Liverpool drop points by drawing 1-1 with each other, even though City manager Pep Guardiola unexpectedly described it as one of the best days of his coaching career.

His fierce Manchester rival Jose Mourinho was equally delighted with United. Before the match, Mourinho had deliberately played down his team's chances at struggling Middlesbrough because of injuries, suspensions and fixture congestion.

"The guys gave absolutely everything, they were magnificent," he said after goals by Marouane Fellaini, Jesse Lingard and Antonio Valencia moved United above Everton and Arsenal to their highest position for six months.

Middlesbrough were left in the bottom three, with crucial games to come away to Swansea City and Hull City after the international break.

Steve Agnew, temporary manager since Aitor Karanka was sacked on Thursday, said he was proud of them, however, and would like the job on a permanent basis.

There were two other happy managers following a thrilling 1-1 draw at the Etihad Stadium, where James Milner's seventh penalty of the season -- this one against his former club -- was cancelled out by Sergio Aguero's equalizer.

"It is one of the happiest days of my career as a manager. I am so proud," Guardiola told reporters.

His pride came less from the result than "the spirit, the way we played".

Liverpool's Juergen Klopp rued missed chances but agreed that a draw was a fair end to an eventful encounter.

"Give me a few hours and then I'm happy," he said. "To get a point at Manchester City for (any) team in the world is absolutely OK."

City stayed a point ahead of Liverpool with a game in hand but fell two behind second-placed Spurs.

The London side seemed to be comfortably on their way to a 10th successive home league win when Christian Eriksen and Dele Alli scored in the first half at White Hart Lane.

Southampton's James Ward-Prowse, called into the England squad last week, gave them some concern by pulling a goal back but Tottenham held on to stand 10 points behind leaders Chelsea with 10 games to play.

Manager Mauricio Pochettino was impressed once more with the versatility of Alli, who now has 17 goals this season in all competitions and will need to keep scoring in the absence of injured striker Harry Kane.

"I saw him at 17 playing for Milton Keynes as a holding midfielder," the Spurs manager said. "Maybe one day he will play like a goalkeeper or a center back or fullback."