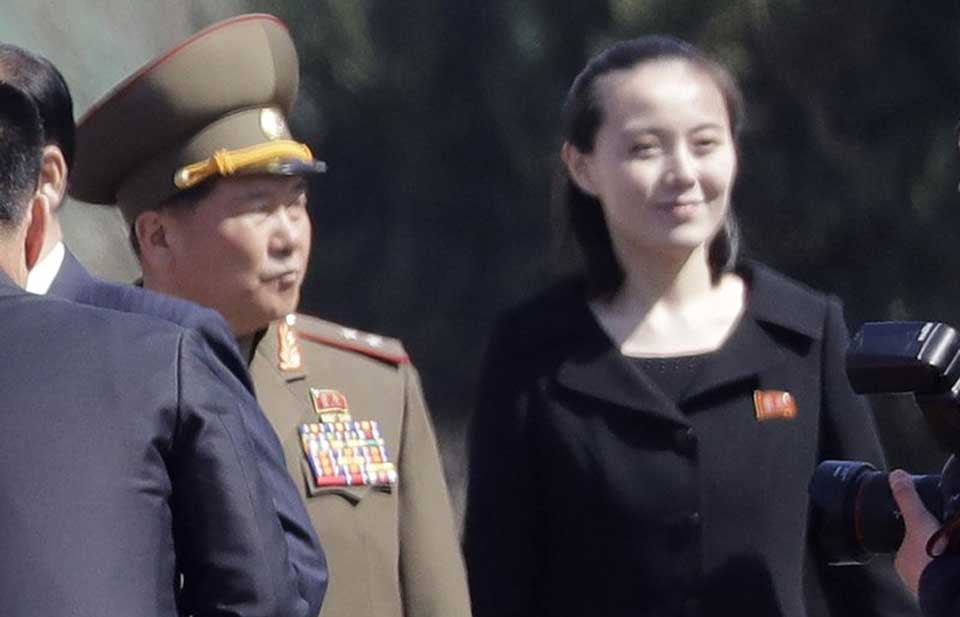 Kim Yo Jong, right, sister of North Korean leader Kim Jong Un, is pictured during the official opening of the Ryomyong residential area, a collection of more than a dozen apartment buildings, in Pyongyang, North Korea. South Korea’s Unification Ministry said North Korea informed Wednesday, Feb. 7, 2018, that Kim Yo Jong would be part of the high-level delegation coming to the South for the Pyeongchang Winter Olympics. (AP Photo/Wong Maye-E)

Kim Yo Jong, believed to be around 30, would be the first member of North Korea’s ruling family to visit the South since the 1950-53 Korean War.

She is to arrive Friday on a private jet to attend the opening ceremony of the Pyeongchang Games later that day, and will join South Korean President Moon Jae-in for lunch on Saturday, presidential spokesman Kim Eui-kyeom said.

It’s highly unlikely that the luncheon will lead to an immediate breakthrough in international tensions over North Korea’s nuclear weapons development, but just holding such a meeting seemed unimaginable only a few months ago.

Moon is looking to the Olympics as an opportunity to pursue a diplomatic opening with North Korea after a year of heightened tensions over its nuclear and missile programs.

Analysts say Kim Yo Jong’s inclusion in the Olympic delegation shows North Korea’s ambition to use the Olympics to break out from diplomatic isolation by improving relations with the South, which it could use as a bridge for approaching the United States.

A North Korean foreign ministry official, however, ruled out a meeting with U.S. Vice President Mike Pence, who will be representing the U.S. at the opening ceremony. The North also held a military parade with tanks and tens of thousands of troops in its capital Thursday to mark the 70th anniversary of the founding of its military. Kim Jong Un told the crowd that the parade displayed North Korea’s might as a “global military power.”

Pence, who arrived in South Korea on Thursday, will meet separately with Moon. He is pushing South Korea to adopt a more hawkish stance toward the North and is warning against North Korean “propaganda” efforts at the games.

Kim Yo Jong has been an increasingly prominent figure in North Korea’s leadership and is considered one of the few people who has earned Kim Jong Un’s absolute trust. She was promoted by her brother last year to be an alternate member of the decision-making political bureau of the ruling party’s central committee, which analysts said showed that her activities are more substantive than previously thought.

South Korean media have been speculating about whether Kim Jong Un will send a personal message to Moon through his sister and, if so, whether it would include a proposal for a summit between the two leaders.

Neither Kim Yo Jong nor Kim Yong Nam are among the North Korean officials blacklisted under U.N. sanctions over the North’s weapons programs. However, the U.S. Treasury Department last year included Kim Yo Jong on its list of blacklisted officials over her position as vice director of the ruling Workers’ Party’s Propaganda and Agitation Department.

The U.N. committee monitoring sanctions against North Korea has proposed granting an exemption for Choe, who has been on the U.N. sanctions blacklist since last June.

North Korea has sent hundreds of people to the Olympics in the South, including officials, athletes, artists, journalists and a 230-member cheering group. Skeptics say the North’s outreach to the South over the Olympics is an attempt at weakening U.S.-led sanctions and pressure against the country and at buying more time to advance its nuclear weapons and missiles development.

Rapid Diagnostic Test not reliable: WHO Nepal Office
10 hours ago

INFOGRAPHICS: Nepalis affected by COVID-19 throughout the world
20 hours ago