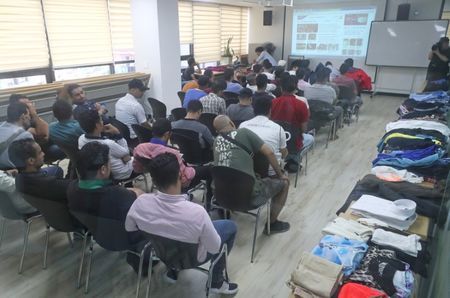 SOUTH KOREA, June 29: South Korea will tighten laws governing the arrival of refugees, the Justice Ministry said on Friday, after a rapid rise in the number of Yemeni asylum seekers sparked anti-refugee sentiment in the racially homogeneous country.

More than 552 people from Yemen arrived on the southern resort island of Jeju between January and May, more than the 430 Yemenis who had ever applied for refugee status in South Korea, the ministry said.

The country has granted refugee status to just over 800 people since 1994. The sudden surge in Yemeni arrivals has fueled concern that many could be seeking economic advantage rather than protection and that they could lead to an increase in crime and other social problems.

More than 540,000 South Koreans have signed an online petition to the presidential Blue House in the past two weeks, asking the government to abolish or amend no-visa entries and the granting of refugee status to applicants.

The Justice Ministry said it will revise the Refugee Act to prevent abuses.

South Korea will also increase the number of officers reviewing refugee applications so as to “quickly review and thoroughly verify identities so as to meticulously review potential for problems including terrorism and violent crime”.

South Korea has already blocked asylum seekers in Jeju from leaving the island and on June 1 dropped Yemen from the list of countries that would not require a visa when entering the country.

The reason the asylum seekers have chosen Jeju can be traced to a direct flight from Kuala Lumpur, established by budget carrier AirAsia X in December, a Justice Ministry official said.

“A few Yemenis started to enter the country in early December and the news about the new flight spread among the 2,800 Yemenis in Malaysia,” the official said, declining to be identified by name.

South Korea began accepting refugee applications in 1994 after acceding to the Convention Relating to the Status of Refugees in 1992. The country also enacted the Refugee Act in 2013, becoming the first Asian country to pass its own refugee legislation which allows protection for refugees that have sufficient grounds for fear of persecution due to race, religion, nationality, social group or political view.

A total of 40,470 people have applied for asylum in South Korea since 1994. The government has so far granted refugee status to just 839.

Yemen has been locked in civil war for the past three years, with aid agencies warning earlier this year that the country is in danger of tipping into famine if fighting continues to disrupt imports of food aid.

A blogger has called a rally for Saturday in Seoul, under a banner reading “Fake Refugees GET OUT”, with mothers of young children posting online they intend to join to raise concerns about crime and loss of jobs.