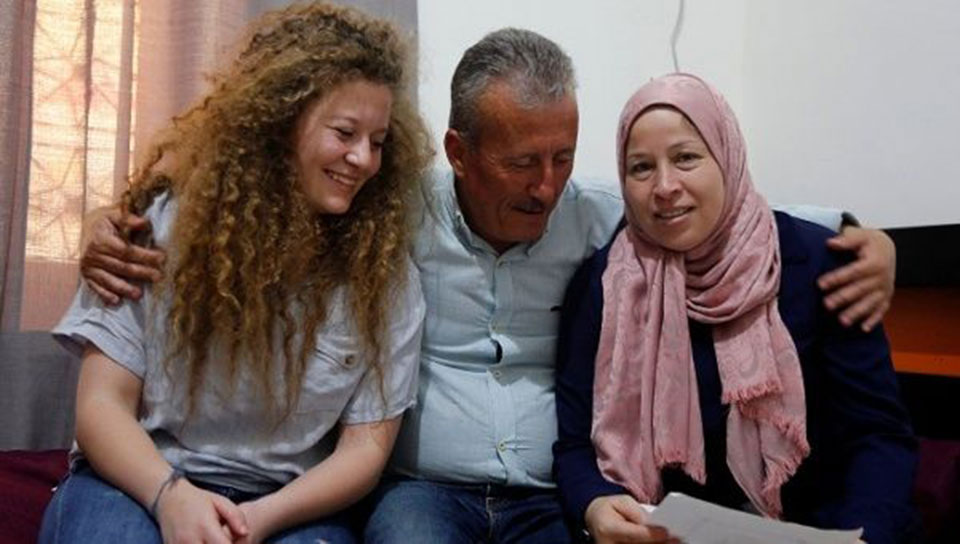 Palestinian teenager Ahed Tamimi sits next to her father and her mother Nareman, at their family house in Nabi Saleh village in the occupied West Bank July 30, 2018. | Photo: Reuters

WEST BANK, July 31: Ahed said she was happy to be reunited with her family but that her joy was not complete as she left behind many Palestinian political prisoners.

The Palestinian teen Ahed Tamimi, who has become an icon for Palestinian resistance against Israeli occupation, will be honored in South Africa with a special award from the grandson of Nelson Mandela, South African news outlets reported Monday a day after she was released from prison upon serving an 8-month sentence for standing up to Israeli soldiers during a raid at her home in Nabi Saleh Village in the West Bank.

Speaking at  the centennial celebration of his grandfather’s birth, Zwelivelile “Mandla” Mandela, the chief of the Mvezo Traditional Council and the grandson of Nelson Mandela, called Ahed Tamimi “a symbol of Palestinian resistance” and promised that he will “continue to support and rally others to join in the Boycott, Divestment and Sanctions (BDS) campaign to isolate Apartheid Israel until Palestine is free.”

The 17-year-old activist was sentenced to eight months in prison after video of her slapping and yelling at an Israeli occupation soldier became viral in December. Ahed was attempting to force the Israeli soldier out of her family’s house. Her mother, Nariman, and cousin were also arrested for the same incident.

Her 15-year-old cousin, Mohammed Tamimi had been shot in the head with a rubber-coated steel bullet a day before. Ahed was charged with aggravated assault, obstructing the work of soldiers, and incitement, among other charges on Jan. 2.

Palestinian and international activists celebrated her release with events in her village Nabi Saleh and other parts of the West Bank, while unknown artists painted massive murals of her on the Israeli separation wall. The two artists were later arrested and deported by Israel. Different Palestinian factions as well as the government in Ramallah welcomed her released and praised her struggle and bravery.

In a press conference Sunday after her release, Ahed said she was happy to be reunited with her family but that her joy was not complete as she left behind many Palestinian political prisoners including minors like her. She highlighted the role of women in the Palestinian cause and told reporters she is now looking to study law in order to fight the Israeli occupation in local and international courts.

The Tamimi family has been constantly targeted due to their active resistance against the expansion of a nearby illegal Israeli settlement named Halamish.

KATHMANDU, Sept 5: Twenty hotels from Nepal have been nominated for South Asia Travel Awards (SATA) competition for their contribution to... Read More...

LONDON, July 27: England won the toss and chose to bat first in the third test against South Africa at... Read More...