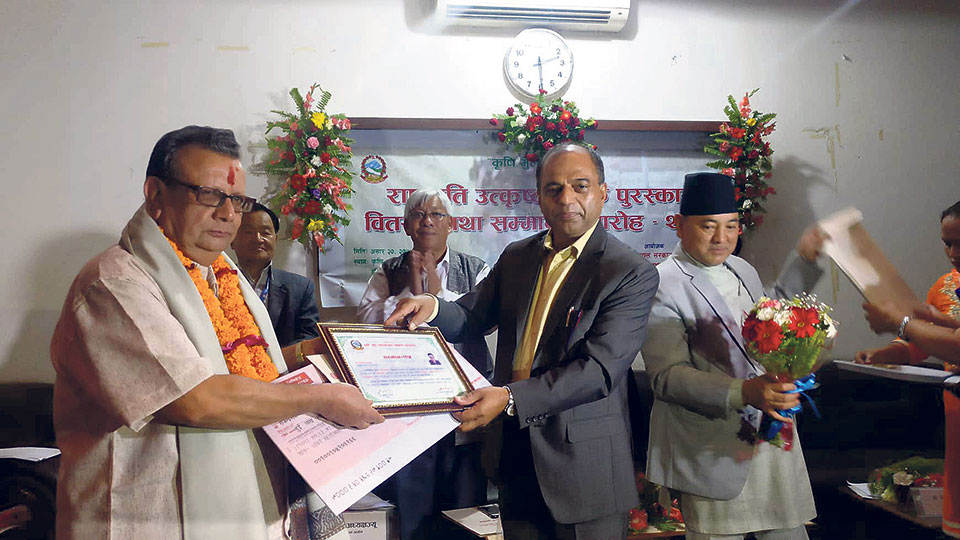 Minister for Agriculture, Land Management and Cooperatives, Chakra Pani Khanal, handed over the award to the farmers amid a event held in Kathmandu on July 4.

Rajendra Raj Panta was adjudged 'excellent farmer' and received cash prize of Rs 200,000 along with a letter of appreciation. Panta is involved in cow farming for the last one and half decades. Starting with seven cows, he now has 235 bovines in his farm. Similarly, other four best farmers chosen by the ministry have received Rs 100,000 each. Yogendra Bahadur Khadka from Chitwan is involved in goat farming and Ram Bahadur Kunwar from Kailali is involved in commercial farming of banana. Likewise, Lal Bahadur Sunar from Banke is involved in farming of mushrooms, while Boualal Mukhiya from Dhanusha in involved in fish farming.

Speaking at the event, Minister Khanal said that the program of honoring farmers for their contributions should get continuity. “It is our responsibility to honor and encourage farmers. They deserve this,” Khanal said, adding: “Continuity of such kind of programs is necessary as it encourages farmers and the agricultural sector of the country.”

He further added that the government was always ready to work support farmers.
The government started honoring farmers with President Best Farmer Award from Fiscal Year 2014/15.
Expressing their gratitude to the government, the awarded farmers requested the ministry to make needful arrangements so that farmers get seeds, fertilizers and other inputs on time.

They also urged the ministry to help farmers find market for their products so that their production is not wasted.

Five farmers to be honored with President Award