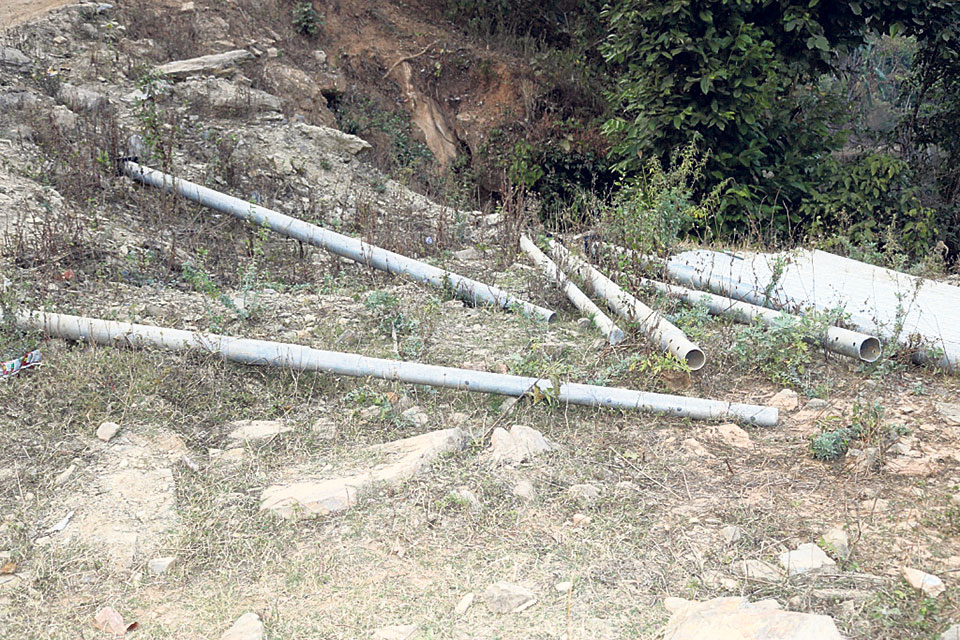 Electricity poles are seen scattered on the edge of road in Benighat Rorang Rural Municipality in this recent picture.

DHADING, Jan 29: Locals in some of the villages in Dhading have been seeing electricity poles scattered along the roadsides for a long time. However, these villagers are bound to live in darkness as there is no power in many of the villages.

According to 82-year-old Deumaya Chepang of Kosrang village, she had a big wish to live in a house full of lights but that has not been fulfilled so far. “Though we have been seeing the electricity poles for many months, we are yet to have electricity power our houses.”

Since the poles are left unattended, children have been using it as their toys. Whenever they are free time, they come around to play with the poles laid scattered on the roadsides. Those poles were actually transported here by the local with much joy, anticipating that their villages would soon have electricity.

At the time, they didn’t know that there is a difference between having poles and having electricity. “We had thought that the electricity poles would be installed immediately and the power would be supplied to our villages soon after that. But even after months of transporting poles here, we are yet to see them installed, connected to the power grid and electricity supplied to our home,” Chepang lamented.

Chapang settlements are most backward in the villages in terms of economic development. As such it is hard for most of these families to afford lights powered by solar panels. Some families, who are well off have installed solar lights in their homes. Even some economically poor families have also been able to install solar-powered lights in their home with the help of NGOs. But Chepangs are deprived of it so far.
“We have been waiting for electricity desperately, but it seems we won’t have this fortune in this birth,” Chepang said.

Locals of Kosrang, Goirang and Rorang villages among others of Benighat Rorang Rural Municipality, have urged the government to expedite the process for supplying electricity to their villages. Stating that they have been forced to live in ‘primitive age’, they called on the authorities concerned to act in favor of changing the status quo.

“In lack of electricity we cannot charge our cell phones, students cannot study at night. Such a situation is very pathetic considering the development in other parts of the country,” said Basu Chepang. “During elections, they made tall promises but after the election, they have forgotten our plights and their promises,” he added.

DHADING, Sep 1: The farmers of Ruby Valley Rural Municipality located in the northern area of the district are reliant on... Read More...

DHADING, Jan 28: Two persons have gone missing on Sunday after being buried by a landslide triggered by heavy snowfall... Read More...