Solo trekker missing for a week in Annapurna Range 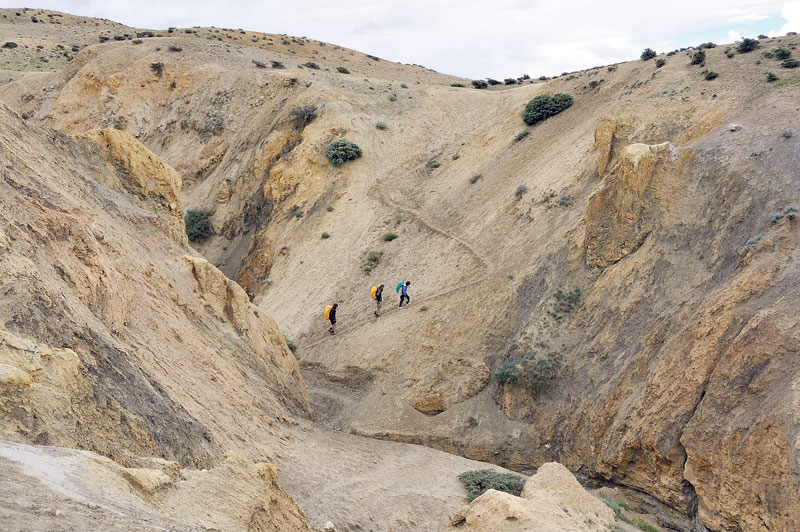 A group of tourists trekking along the Terilla Pass in Upper Mustang in this recent picture. Republica Files

Tourism entrepreneurs stress on banning solo treks
POKHARA, Oct 24: Israeli national Amit Mosche Reichman, 42, has gone missing while trekking along the Annapurna trekking circuit. Reichman had last contacted friends and families a week ago and was reported to have been trekking along the Mardi Himal trekking route. Since then his whereabouts remain unknown.

"Reichman contacted his family on 17 October. Since then, he has not come in contact with anyone," said police inspector Jayram Wanta, who is a part of the search team. "Our investigation so far has revealed that he had stayed at the Fishtail Guesthouse. From where he had headed out for Mardi Himal telling the lodge staff that he would return in two hours," Wanta added.

He informed that the search team has been searching for Riechman intensely in all the possible areas and trails of Mardi Himal area that is around 5553 meters above the sea level.

"His personal belongings, which include clothes and other stuffs, are at the hotel. Though he had told the hotel staffs that he would return back in around two hours for lunch, he never showed up."

The search team has been camping in higher altitude of Mardi Himal for conducting the search. Along with them, Israeli embassy has also sent out additional members with a helicopter for assisting, he informed.

"A joint search team which includes Nepal Police, search professionals sent by the Israeli embassy, locals and tourist guides has been making every effort possible to search Riechman. But so far we have not been able to get any positive sign," said Wanta. He informed that the search operation is getting affected from time to time due to bad weather. "We have been conducting aerial and ground search, despite challenging weather. But so far we have been not successful."

Apart from the lodge staff, Riechman was spotted by another team of trekkers just few kilometers away from the lodge. But he is reported to have separated from them after a while. Since then, he was not spotted by anyone, the search team informed.

Nepal Tourism Board (NTB) records state that Riechman, who is an engineer by profession, arrived in Nepal on October 2 and has a visa valid until the end of the month. He had taken permission from the NTB, Pokhara, for trekking to Annapurna Base Camp after Mardi Himal.

Tourism entrepreneurs informed that it takes an additional day of trek from Mardi Himal to reach the high camp. As the trek above the high camp is very tough, only few tourists go for it.

"It is very tough to trek above the high camp. So many trekkers give up the quest from there. It is not possible to climb it without using expedition gear," said Milan Tiwari, a trekking guide.

Just three months ago, Adina Monica Popescu of Romania who had gone missing, was found dead. Her body was found lying on the bank of Suikhola River in Ghandruk-1. Similarly, not all of the Japanese and Malaysians tourists, who were reported missing in the area in the last few months, have been found. Dead bodies of only a few of them have been recovered so far.

According to tourism entrepreneurs, around 5 to 6 tourists go missing in the Annapurna range annually. And few of them come out alive.

"Safety of trekkers call for trekking with professional team or guide instead of solo treks. When someone goes on to trek solo along a dangerous trail, they are prone to go missing," said Deepak Raj Adhikari, president of Western Chapter of Trekking Agency Association of Nepal (TAAN). "Therefore we have long lobbied for banning solo treks."

"When we allow solo trekkers, we not only allow them to risk their life but also put our safety measures on the stake. When a trekker goes missing, along with the suffering their family and loved ones have to go through, our trekking industry earns a bad name," Adhikari said, adding that those who go for trekking in group are far safer and at ease. He called on government agencies to introduce proper guidelines and make provisions for strictly monitoring their implementation to make trekking safer.

Wanta who has been involved in other search operations previously said that foreigners opt to visit alone in the trekking route in search for adventure but it becomes a grave problem when they go missing. "Tourists should not be over confident when in unknown terrain as it can push them and those associated with them into trouble" said Wanta while stressing on restricting solo treks.

KATHMANDU, April 27: A Taiwanese man who was missing on a mountain in Nepal for 47 days was rescued Wednesday,... Read More...

POKHARA, July 25: A Romanian tourist, Adina Monica Popescu, 26, who was missing since July 16 in Annapurna Region, has... Read More...