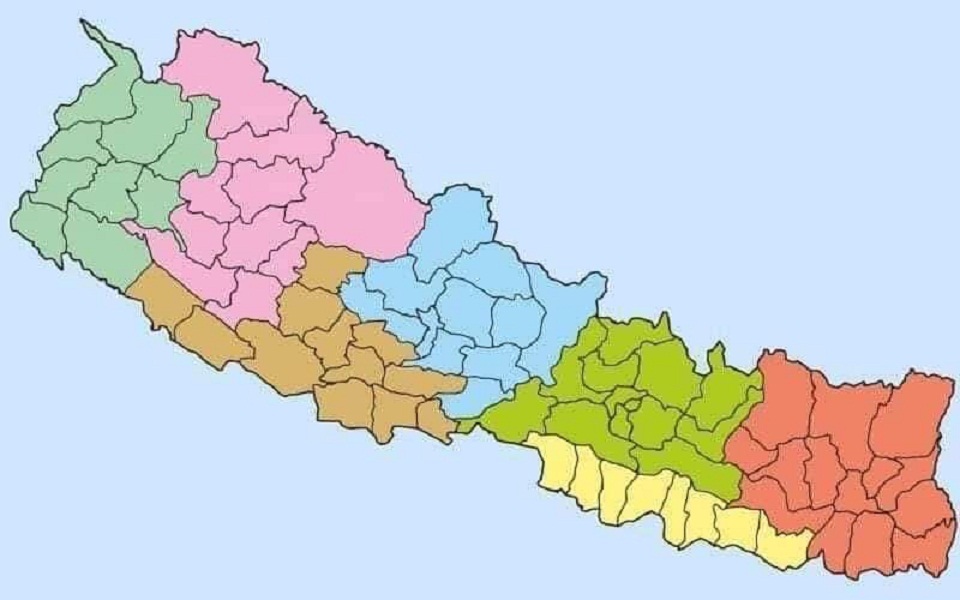 The author, based in London, is a human rights researcher focusing on labor, migration, and social issues.
krishupa@gmail.com

Whether or not they support the current government in Nepal on internal matters, Nepali diaspora communities believe the land included in the new map truly belongs to Nepal.

Even during the lockdown caused by Coronavirus, a small number of Nepalis representing different political parties gathered in South Harrow in London on May 22 with an enlarged new political map of Nepal.  Due to coronavirus situation, protest letters were sent to Indian High Commission in London by post, the process which was followed by the Nepali expatriates and diaspora communities in Cyprus, Qatar, Belgium, Portugal, and Spain. Irrespective of differences in their political stances, they came together. This indicates that whether or not they support the current government in Nepal on internal matters, they truly believe that historically the land included in the new map belongs to Nepal.

A closer look at the social media postings by the Nepali diaspora communities indicates that they rightly understand that the Sugauli Treaty between sovereign Nepal and British India states that land to the east of the Kali River belongs to Nepal. More importantly, they argue the Kali River in question is the bigger river stream to the east of which falls the land included in Nepal’s recent map. Some social media postings even unearthed that old school books around 1957 showed the area in Nepal’s map, people of the area voted in the general elections of 1958 and even the government of Nepal ran census survey in the area and the people paid land revenue to the government of Nepal around that period.

The diaspora Nepali communities clearly understood that despite removing 17 Indian army check posts from Nepal in the late 60s, the one stationed in Kalapani was not removed, as the Indian army had by then established a full garrison there during 1962-war between India and China. For nearly thirty years, the diaspora community believes as shown in their Facebook postings, there was no effort from governments of Nepal to raise the issue with their Indian counterparts, and around that time the area disappeared from Nepal’s map which was printed in India. Though anti-government political groups persistently raised the border disputes relating to Susta and Maheshpur during this period, the issue of Kalapani, Limpiadhura, and Lipulek (included in the current map) only came to public knowledge after the advent of democracy in Nepal in 1990.

Nepalis worldwide, their friends and families in Nepal were taken aback when India and China agreed to use the tri-junction of Lipulek to open for India and China trade and pilgrimage in 2015. Nepal protested formally to both India and China.

After Nepal decided to publish a new map, India’s Ministry of Foreign Affairs reacted at a press conference and argued the 372 Square Kilometers of land belonged to India. But at the same time, it also invited the Nepali side to resolve the issue through bilateral talks.

At a time when Nepalis also blame China, the Indian argument is that the Nepali claim was made with Chinese backing. Showing some of the recent Chinese active roles within Nepal and increased collaboration and trade between two countries, India argues that the Chinese manipulation caused an artificial clash between India and Nepal, two ‘brotherly countries’ with long shared cultural, religious and civilizational past, including economic, and family ties, popularly termed as ‘roti-beti’ relation. They argue that Nepal is excessively reliant on India due to its economic support and trade, but is now betraying them.

Thousands of Nepalis work in India, including in the army. This brings a sizeable remittance to Nepal. However, some recent studies show India takes back threefold more remittances from Nepal, which is the eighth biggest source for India’s foreign remittance. There are areas the migrants only can do the work in both countries. Most of the construction work in Nepal is the Indian sphere, but also the agriculture work in Uttarakhand is the Nepali sphere, as agriculture harvesting in the high altitude of the Uttarakhand cannot be done by workers in Bihar.

Until a few decades back Indian royals either married off their daughters to Nepali palaces or also took grooms from Nepali royal houses. Culture, religion, language, and proximity, and to some extent, political relations, have contributed to this. Hundreds, if not thousands, of Brahmins, married in India after they completed their education in Gurukuls. Therefore, ‘roti-beti rista’ of Nepal with India is continued by both hill and plain communities of Nepal, as is the ethnic linkages. Point to note here, ‘roti-beti rista’ is a relation of ‘sambandhi’ which is based on equal footing, not on big-small notions.

Nepal being one of the biggest trade partners is a point of satisfaction for India. But the buzz during the TV debates in India that ‘we are giving them petrol, we are giving them rice’ does not hold water, as it is not philanthropy, it is business, which India would like to continue. Nepali minds are very much aware of their uncomfortable position in the past that they had to trade only with India due to geographical advantage, language, and proximity. But when Nepal tries to diversify its trade with other countries, there is a buzz again from the backyard of India, which leaves Nepalis confused.

Recognizing the historical realities, benefits of the trade to both parties, and entrenched ‘roti-beti’ and ethnic, linguistic, religious, and cultural linkages, Nepal and India should start bilateral discussions on the border issue without making room for any third party. The issue should be settled once and for all. For the better relations, including for controlling crime and terrorism, they also must find forward looking solutions for the  regulation of borders while allowing people-to-people movement unabated.

The author, based in London, is a human rights researcher focusing on labor, migration, and social issues.

$700,000 US support for Gaddhi Baithak restoration

KATHMANDU, July 7: On the occasion of 37th anniversary of Nepal Independent Hotel, Casino and Restaurant Union, a team of... Read More...