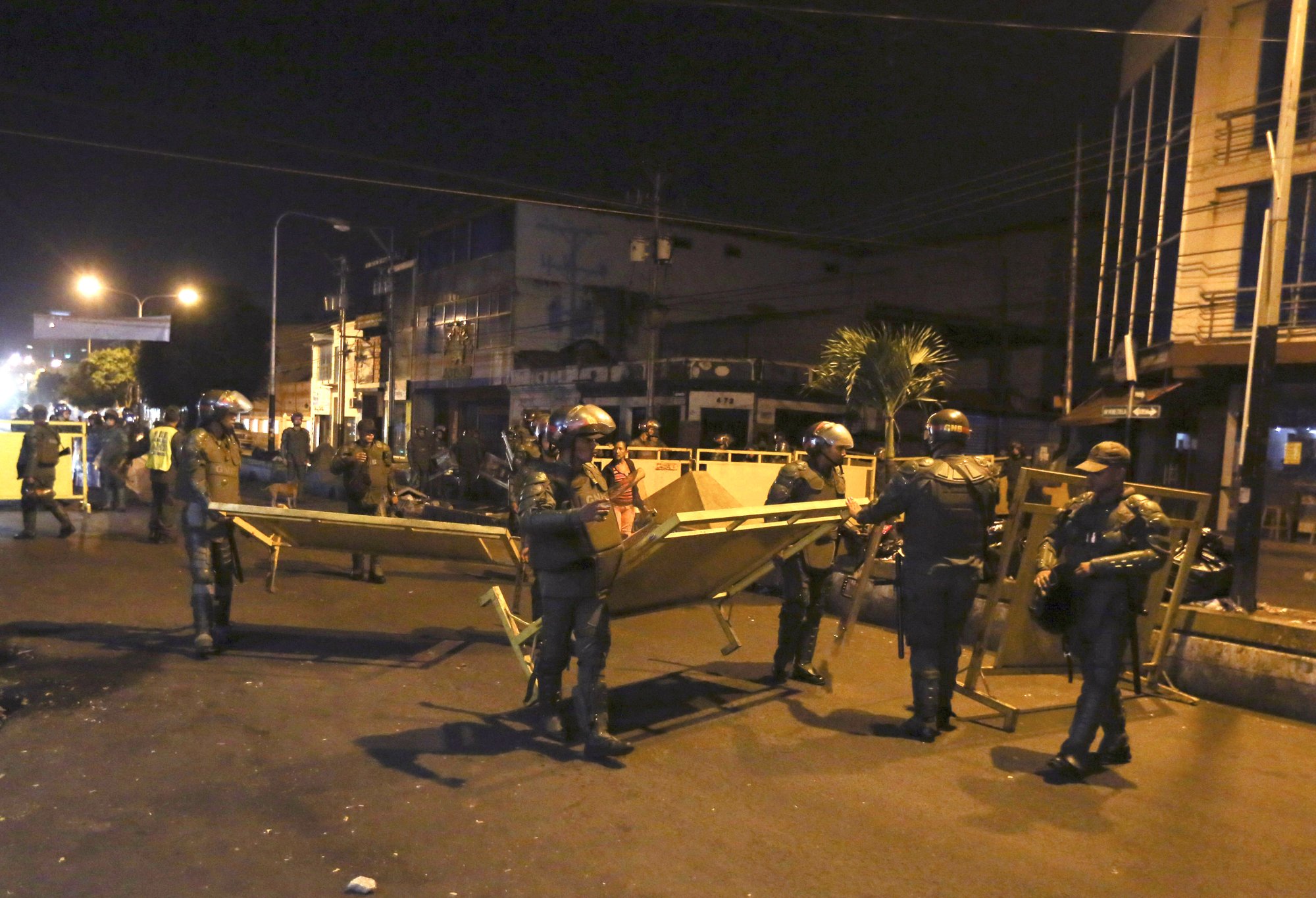 The opposition is calling on masses of Venezuelans to help trucks carrying the nearly 200 metric tons of humanitarian assistance delivered largely by the United States over the last two weeks across several border bridges in Colombia.

There was no immediate word on their rank, but a video provided by Colombian authorities shows three of the men wading through a crowd with their assault rifles and pistols held above their heads in a sign of surrender. The young soldiers were then ordered to lay face down on the ground as migration officials urged onlookers to keep a safe distance

The potentially volatile moment for both Venezuela’s government and opposition comes exactly one month after Guaido, a 35-year-old lawmaker, declared himself interim president under the constitution before thousands of cheering supporters. While he has earned popular backing and is being recognized by over 50 nations, he has not sealed the support of the military, whose loyalty is considered crucial to unseat Maduro.

Trucks loaded with humanitarian aid on Saturday are now set to face a crucial test: Whether the military standing guard on the other side will let them through.

“We think it’s going to enter,” opposition leader David Smolansky said in the lead up to the push. “There will be so many people gathered at the border and in different cities around the country that it will be impossible to stop it.”

Before daybreak Saturday, many national guards in riot gear forced people to move away from the road to the Simon Bolivar bridge connecting Venezuela and Colombia. The Venezuelan government had said that it was closing three of its bridges on the border.

“The armed forces have closed the borders following Maduro’s orders. But the morning is just starting, and as the day goes by, more and more people will join, and I think (the government) will reflect, open the border and welcome the medicines we need,” said Ronaldo Suarez, a vendor.

International leaders including U.N. Secretary-General Antonio Guterres are appealing for the sides to avoid violence as the opposition tries to get food and medical supplies across bridges that Venezuelan authorities ordered closed Friday night. In previous waves of unrest, citizens have been tear-gassed and even killed during protests.

Venezuelan Foreign Minister Jorge Arreaza said the military would “never have orders to fire on the civilian population” and likened the aid push to a media spectacle.

“We can only hope that sanity and good sense prevail in Cucuta, in Colombia, and that it will remain as a big show, a bit party, and that they don’t try to open the doors to a military intervention,” he said at U.N. headquarters in New York Friday.

The aid push comes on the heels of a giant concert organized by British billionaire Richard Branson aimed at pressuring Maduro to accept the aid. Tens of thousands of Venezuelans gathered in a field to hear pop stars like Juanes sing beneath a scorching sun. Guaido made a surprise appearance toward the end.

In remarks after the event, Guaido spoke alongside Colombian President Ivan Duque and Chilean President Sebastian Pinera and said he had been able to circumvent Maduro’s travel ban only with the help of the armed forces.

“Here is a Venezuela in search of freedom,” he said at the aid storage facility. “Thank you, to the people of the world, for opening your doors to us.”

The opposition is planning to hold three simultaneous aid pushes on Saturday. Aside from the events in Colombia, they also hope to get humanitarian assistance delivered by sea and through Venezuela’s remote border with Brazil.

On Friday, a member of an indigenous tribe was killed and 22 others injured in clashes with security forces who enforced Maduro’s orders to keep the aid out at a crossing with Brazil.

Venezuela’s military has served as the traditional arbiter of political disputes in the South American country and in recent weeks top leaders have pledged their unwavering loyalty to Maduro. However, many believe that lower-ranking troops who suffer from the same hardships as many other Venezuelans may be more inclined to let the aid in.

Opposition leaders are pushing forward in belief that whether Maduro lets the aid in or not, he will come out weakened. They also contend that if the military does allow the food and medical gear in, it will signify troops are now loyal to Guaido.

Analysts warn that there may be no clear victor and humanitarian groups have criticized the opposition as using the aid as a political weapon.

“I don’t know that anyone can give a timeline of when the dam might break, and it’s quite possible that it won’t,” said Eric Farnsworth of the Council of the Americas and Americas Society, a Washington-based think tank.

Fearful of what they might encounter, some Venezuelans in Cucuta said they planned to stay away, while others said they’d face the risks and go.

“For my son, I’d risk everything,” Oscar Herrera, 25, a Venezuelan man who took an 18-hour bus ride to Colombia to buy his infant medicine for a skin irritation earlier this week.

Hernan Parcia, 32, a father of three, said he planned to go with his entire family.

“I’m pained by what’s happening to my country,” he said. “They can count on me.”

MADRID, Feb 4: Spain, France and Sweden have all announced that they are recognizing Venezuelan opposition leader Juan Guaido as the... Read More...