KATHMANDU, June 2: Social media folks have vented their ire on the government's plan to decorate Sheetal Niwas, the President's Office, by spending around Rs 20 million calling it ill-timed.

The government agencies should have better avoided carrying out renovation works at the President's Office because the entire country is undergoing severe hardships due to the lockdown triggered by the COVID-19 pandemic, they say.

It is learnt that the Department of Urban Development and Building Construction (DUDBC) had awarded the contract to two private companies for renovation works including replacing carpets and toilet maintenance at the President's Office in the third week of May.

People on social media are also pointing fingers at President Bidya Devi Bhandari for this "ill-timed work" arguing that such works at the President's Office should have been in the knowledge of the president beforehand.

A Twitter user writes “The President’s Office is busy purchasing new carpets by spending Rs  10 million as the people are dying from hunger due to COVID-19. What an irony?”

Although media reports suggest that Rs 18.4 million is being spent from the state coffers to replace carpets and renovate toilets, an official at the President's Office claim that Rs 2.7 million has been earmarked for the same.

Refuting media reports, Bhesh Raj Adhikari, the president's chief aide, told Republica Online that those renovation works were in the pipeline for a long time.

"These renovation works were in the pipeline for a long time. The government agencies initiated the job much before the coronavirus pandemic," he said. 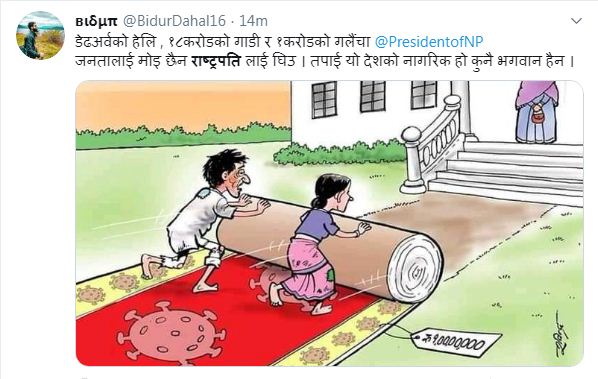 He further said that replacing carpets and renovating toilets at the office building of the head of state is not something unusual. "Is it not necessary to have good carpets and toilets at the office of the head of state? We need to keep in mind that this office hosts top dignitaries from abroad too, and it matters a lot for the country's prestige too," Adhikari said.

The government, which has announced to enforce various austerity measures through the budget speech, to check unwarranted expenses keeping in mind the looming economic crisis in the country, has come under fire for the planned renovation works at the President's Office at this hour of a global health crisis.

Nation in crisis due to President Bhandari: Koirala

SUNSARI, Feb 16: Dr Shekar Koirala, one of the key leaders of Nepali Congress, has said that the nation is... Read More...